It’s almost impossible to put a label on Lord of the Lost. Their gothic roots remain throughout this overlong double album but elsewhere there are numerous styles which will no doubt delight their fans. For me, I admit that it was a bit of a chore.

‘Judas’ is a concept album, divided into two parts, ‘Damnation’ and ‘Salvation’. Detailing the perception of Judas Iscariot, and the so-called Gospel of Judas, a paper that's said to consist of conversations between Jesus Christ and Judas Iscariot and which casts a different light on religious history as it's told in the Bible's New Testament. It’s a topic that requires a bold and confident attitude. Lord of the Lost have that in spades. 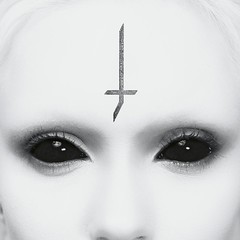 ‘Damnation’ opens well, with ‘Priest’ an uplifting and rousing track that is drenched in atmosphere and sets the scene for the first record. Open to large choral and harmonic passages, there is also ample heaviness to pique the initial interest. The choir add depth and emotion to singer Chris Harms, whose vast vocal range is impressive. Although the sound and production are massive, there is a strange, almost Eurovision feel for much of the album. It’s almost Europop at times. ‘For They Know Not What They Do’ is a classic example, rich with pop hooks and an upbeat tempo.

Using a combination of harsh and clean vocals, the soundscapes on ‘Damnation’ are dramatic and inspiring, but also a little bit overplayed. Drama plays a large part and ‘The 13th’, ‘In the Field of Blood’ and ‘Death is Just a Kiss Away’ all contain the combination of elements that the band are well known for. It’s dark, emotionally intense, and just a little over the top. Grand piano, strings and a church organ are all involved. There’s no denying the drama, the theatrics, and the passion, but it doesn’t half go on a bit.

‘Salvation’ starts in similar dramatic style. ‘The Gospel of Judas’ a bombastic semi-industrial piece that combines all the band’s elements in four explosive minutes. Once more, the record varies in tempo, style and atmosphere. ‘Viva Vendetta’ is almost vaudeville in approach, a genuine show tune, full of flamboyant exclamations. The Eastern tinged ‘Argent’ provides a pleasing if somewhat surprising change of direction, whilst the electro-rock of ‘And it Was Night’ adds yet another dimension. It’s at times soaring and uplifting, but at others overwrought and exaggerated.

This double album is hugely emotional, sophisticated and with a dual concept running through it, challenging to immerse oneself in. I have no doubt that it will be felt to be a masterpiece in some quarters. It’s certainly an interesting listen but it feels about 20 minutes too long. There’s a bit of repetition and whilst the playing is first class, it did become a little tiresome by the home straight. Maybe it’s an album that one had to spend more time with before making a full judgment. I’m not sure. Maybe trying it would be the best option.