Although pinning their colours faithfully to the thrash metal mast, there is plenty more going on in this debut release from the Texas outfit Archangel A.D. Six years in the making, it’s an album in which they bring the crunching riff with alarming ease. Opening with the Motörhead feel of ‘Bet on Death’, with its gambling influenced themes and the inevitable nod to Lemmy and Co, the Texans don’t take a breath before crashing into the skull splitting title track. It’s aggressive, ferocious but with a melody that leans towards the likes of Flotsam & Jetsam, Armored Saint and Metal Church rather than the ballistic assault of some of the harder hitters in in the genre.

Plenty of jagged riffage on ‘Beacons’, which takes a generally heavier but slower paced approach. A ‘Lord of the Rings’ themed song, (‘The Return of the King’ in fact), this should resonate with many. And then we turn into a dark alley with a complete shift in tempo and style on ‘Pluto’s Lament’, which is a doom filled instrumental, or should I say solo for it appears to be entirely a bass solo. It’s so out of kilter with the preceding songs that you can only applaud the individuality. 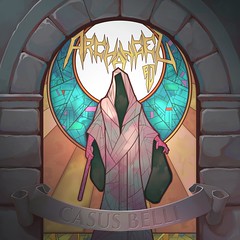 No such melancholy on ‘Celestion’, a fully unleashed rager which should please those who worship at the old school thrash altar. It features a fabulous change of pace and reminds me of the Aussie thrashers 4Arm as well as some early Evile. It’s a cracker, even if it is Metallica circa 1984.

As if ‘Pluto’s Lament’ wasn’t enough, the mind will surely be blown by the diversity here which arrives with the Spanish harmonies and vocals in ‘Sangre de las Montañas’ (‘Blood of the Mountains’) which bizarrely works in a way one would think unimaginable on paper. An acoustic, almost traditional song, it segues comfortably into the massive ‘Demonolith’, a huge, anthemic tale which is full of distortion and power.

And then, to cap it all off, Archangel A.D have the balls to close with an 11-minute metallic workout in ‘Caught on the West Wind’. There’s groove, riffs galore and a pace that is initially required to keep the momentum pulsing. It’s not particularly innovative or original, but the underpinning groove riff works, and the change in vocals to gravel-soaked semi death growls adds heft. The switch to power metal ballad after four-minutes is both unexpected and one of the weaker segments; the harmonies on the vocals aren’t brilliant and one wonders why the track needed to be taken down this route. It feels like a Rainbow tribute although the guitar work is immaculate. Once the throttle opens back up, it’s a visceral race for the line, with more than a nod to the mighty Opeth in their pomp when the band hit full stride. You are however, gripped by the haunting thought that maybe, just maybe, the horrible acoustic vocals will pop up again. Thankfully, they don’t and the rest of the song heads for the exit.

There is ample to get stuck into here. A mix of thrash and more progressive, versatile songs show that the band have worked hard. If it is enough to get a breakthrough, who knows? For now, sit back and enjoy this music. And applaud a band whose approach works well.