Always regarded as the fourth in the Teutonic thrash quartet after Kreator, Sodom and Destruction, Tankard are often dismissed as a bit of a joke band due to their typically fun and beer fuelled approach. Formed in school in 1982, the band who initially took the name Avenger grabbed attention with their two early demos, ‘Heavy Metal Vanguard’ and ‘Alcoholic Metal’, and they become one of the newly formed Noise records early signings. Over nearly a decade that Tankard were with Noise the band released seven albums, all of which are now being re-released under the title ‘For a Thousand Beers’.

The Noise Years began with 1986’s ‘Zombie Attack’ and concluded with ‘The Tankard’ in 1995. ‘Zombie Attack’ featured vocalist Andreas "Gerre" Geremia and bassist Frank Thorwarth who both remain with the band today, as well as guitarists Andy Bulgaropulos and Axel Katzmann and drummer Oliver Werner. It’s a raw debut, but one that retains an appeal today. The title track sets the pace, with a sound that that remains the core of the band even today, with an anarchic combination of thrash and punk in one raging ball of chaos. There’s plenty to enjoy in this debut, with the frenetic guitar work, monstrous riffing and Geremia’s snarling vocal delivery. The lyrics never take themselves seriously, with songs such as Thrash Til Death. Maniac Forces and the raging cover of Gang Green’s ‘Alcohol’ setting the blueprint for the band. It stands up well over 35 years later.

1987’s ‘Chemical Invasion’ continued where ‘Zombie Attack’ left off but with a better production and quality in songs. The same line-up delivered the same bombastic thrash assault, with little room for breath as 41 minutes simply race by. The lyrical content remained rather alcohol focused, with the likes of ‘Tantrum’ (about having your beer stolen), ‘Puke’ and ‘For a Thousand Years’ leaving little to the imagination. Shoots of wider creativity and the odd change in song writing also appeared with the chug of the US thrash wave starting to infiltrate Tankard’s sound, as shown on the slower elements of ‘Don’t Panic’. By this time across the pond, Metallica had released ‘Master of Puppets’ Megadeth ‘Peace Sells’ and Slayer ‘Reign in Blood’ so it’s an interesting comparison with the way that thrash was evolving globally. Tankard’s approach was still face melting riffage, as fast as you can.

The next stop on the Noise journey is 1989’s ‘The Morning After’ which also here includes the ‘Alien EP’. It adds up to another hour of rampant carnage, with Tankard upping the pace again. ‘Shit-Faced’ reassured those who liked a pint that the Germans were still very much focused on alcoholic consumption. The thrash was still fast, the riffs still flowed and it’s another album that you can enjoy from start to finish. The real question by now was of course whether Tankard were evolving or simply repeating the formula. There are definite elements of progression on ‘The Morning After’, with the playing tight although the standard approach of heads down saw their sound straddle Exodus and Anthrax more than their fellow countrymen in the German big four. The longest song the band had recorded at the time appears in the shape of ‘T.V. Hero’ and its one of the best on the album interspersing explosive breakdowns with slower, riff heavy passages. Just when you settle in for more of the same, Tankard throw the rock ‘n’ roll stomp of the Spermbirds song ‘Try Again’ which comes out of nowhere and is a complete curved ball in comparison with the previous fare. 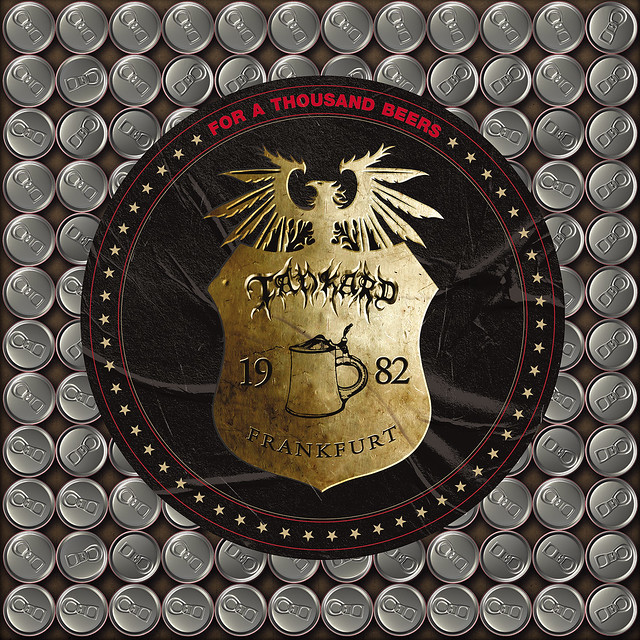 A change in the line-up for 1990’s ‘The Meaning of Life’ with Arnulf Tunn replacing Wener on the drum stool. The fourth album certainly isn’t their strongest although Tun’s delivery is brutal with some excellent double pedal work. The slight change in lyrical subject includes the reflective focus of environmental decay with ‘Dancing on our Grave’ and ‘Mechanical Man’, one of the better songs on the record. The lyrics are often dreadful, as seen on the anthemic ‘Space Beer’, but this is Tankard after all, and beer is as always, flowing. Skip along to the end of the album and you’ll get the thunderous ‘Barfly’, which is another highlight. This version also has some extra live tracks for the collection.

1992 saw the band deliver ‘Stone Cold Sober’, and despite the change in sound around the rock and metal world, Tankard focused on delivering one of their heaviest and thrashiest albums, one which holds a place in the hearts of many thrash fans. Having eschewed their beer drinking themes, the Germans maintained a level of intensity that few around them were delivering. Checking out reviews on the net revealed a range of views, differing from a thrash classic to a flaccid, uninspiring album. There’s no doubt that Stone Cold Sober is a little different from previous releases, and songs like ‘Jurisdiction’ still contain heft. There was a change in vocal style with Gerre’s singing on ‘Broken Image’ much more restrained. Whilst the songs remain faithful to their thrash roots, they were also longer, and displayed a wider range of song writing. Some have called this album average but this latest play through was not a chore in the slightest. Even the bizarre cover of The J Geils Band’s ‘Centrefold’ worked okay. It’s the closing track on this release, the seven-minute instrumental ‘Of Strange Talking People Under Arabian Skies’ that really grabs the attention. Sure, it’s got plenty of Metallica flavouring laced throughout it but for me it really demonstrated that the band could be seriously good and whilst I am no musician, it sounds bruising enough even with the shock use of synthesisers.

March 1994 saw album number six in the shape of ‘Two-Faced’. Once again, Tankard shunned their previous beer-fuelled themes in favour of social commentary. It opens strongly with ‘Death penalty’ and although the tracks aren’t bad, there’s a little more ‘routine’ in the song writing in comparison with other albums.

The last album under Noise’s overview came with 1995’s ‘The Tankard’ which saw a couple of changes in personnel. Out went Tunn, replaced by Olaf Zissel whilst Katzmann also departured, leaving the band as a one guitar band. Zissel remains in the band to this day, whilst Bulgaropulos left in 1999. The Tankard is just under 45 minutes in length and returns to the band’s booze flavoured themes although they do retain some wider topics throughout. The Tankard saw the band widen their sound, stepping slightly away from the thrash that they delivered, although the pace and fury was much the same. ‘Minds of the Moon’ for example, was a cross between Motörhead and Green Day, not a sound that suited Tankard that well. ‘The Story of Mr Cruel’ carried with it a social observation and featured news recordings about the Bosnia civil war. A sobering soundbite amidst the return to the pub. The songs on ‘The Tankard’ may not have been as aggressive as their earlier work, but there are some decent tracks here and it remains an important album in the overall Tankard catalogue.

For those collectors, there is a multitude of options available with this release. ‘For A Thousand Beers’ collector’s edition includes splatter vinyls, Fat, Ugly & Live DVD – containing ‘Open All Night’ concert film, ‘Fat, Ugly & Live’ album plus previously unreleased video concert from Dynamo, Eindhoven 1987, and audio concert from Frankfurt 1988 as well as a 40-page hardback book of photography, quotes and lyrics from the first decade of the band’s existence. All housed in a case of beer box!