It’s strange how times and opinions change. Six years ago, I reviewed ‘Slavery’, the third album by German thrashers Eradicator, for another site. I hated it with a passion, giving it a paltry 2/10. I particularly disliked Sebastian "Seba” Stöber’s strained vocal delivery. I steered clear of their follow-up, 2018’s ‘Into Oblivion’ but there was no escape come 2021 and I strapped myself in expecting the worst as I pressed play.

Well, by Odin’s beard, things have improved. The 47 minutes of typically Teutonic thrash that erupted from my speakers was perfectly listenable and at no time did the rage of six years ago even trickle, let alone flood through me. Yes, it’s routine stuff, and Seba’s singing is still an acquired taste with his high-pitched delivery and the gang vocals ticking every thrash clique in the book, but ‘Influence Denied’ is a solid, if unspectacular thrash/heavy metal album. 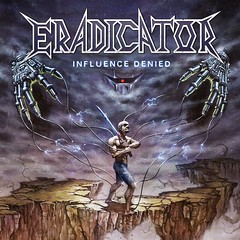 Having written the album from early 2019 – summer 2020, the band has clearly used the opportunity to craft more structured music, with themes of critical reflection and humility as they hold the mirror up to society.

Ultimately, any band is judged on how they sound, and the breakneck old school feel of tracks such as ‘Driven By Illusion’, ‘Jackals to The Chain’ and ‘5-0-1’ should be welcomed by fans of 80s thrash. It’s clear that the band have grabbed their influences, shaken everything up in a big bottle of thrash and ‘Influence Denied’ is the result.

It’s fair to say that Eradicator steer closely to the thrash metal blueprint. There is little variation in song length, with the majority hitting the 4:30 mark, and there is some repetition in format, but the lacerating riffing, powerful drumming and thundering bass all work in harmony to create a savage aural assault. Musically, there is little dislike, and the production, courtesy of Orden Ogan mastermind Sebastian "Seeb" Levermann (Asphyx, Brainstorm, Rhapsody of Fire) ensures a crispness whilst retaining the savage rawness that this type of thrash demands. I’m now wondering whether to leave sleeping dogs lie or dig out ‘Slavery’ again to see if it was as bad as I thought.