This is the second E.P. from the Ontario outfit this year. First impressions are positive, with the band’s tight musicianship at the fore of all they do. Having started as a recording project for Lucas Di Mascio, a multi-instrumentalist and producer, Malacoda slowly eased through the gears, changing line-ups, and releasing their self-titled debut. The current line-up sees Di Mascio joined by Wes Macdonald and Zak Stulla. 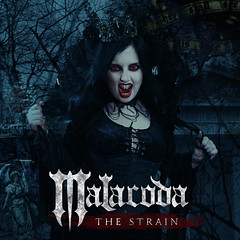 Inspired by the works of Guillermo Del Toro, ‘The Strain’ is four songs over 20 minutes and sees the band explore their horror inspired roots deeper than ever before. The gothic sound is dominant, although there is progressive metal aplenty mixed within this E.P.

A blend of sweeping symphonic movements, dramatic vocals that switch from soaring cleans to guttural growling and a groundswell of heavy drumming and bass all combine. The title track kicks things off at a high tempo, blisteringly fast double kick drumming and a dramatic, urgent pace give it plenty of intensity. Thick layers of keyboards work well, not over dominant but adding the necessary gothic feel whilst the guitar work is measured but not buried.

Elsewhere, ‘Where Shadows Play’ sees the band lock down with a driving riff and imposing vocals. It’s a sonic soundscape which cannot fail to capture the attention. There’s a theatrical feel to the whole E.P. and nowhere is this more evident than on this song. Closing song ‘Mind Flayer’ changes tempo once more, with an almost electronic blend which works well with the overall feel of the E.P. leading into a heavier, more aggressive closing couple of minutes.

The Strain is enjoyable to listen to. It wasn’t an E.P. that grabbed and shook me; it wasn’t ever going to do that. But it is a solidly crafted piece of work that is both commanding and intriguing. Another band that has broken away from the mould, Malacoda follow their own path.

Check out our review of their previous E.P., Crawling Chaos, here.
And back in March the band got shipwrecked on Devil's Island. Find out what happened here.