I must hold my hands up here and tell you that I am not up to date with Icelandic tech death metal, so it is with great trepidation that I sat down on a Sunday afternoon and began to listen to 'Desolate' by Ophidian I.

Now, one quick suggestion, do not play this anywhere near teenager daughters who are obsessed with Harry Styles, because this album is heavy as f**k, and will make them cry! 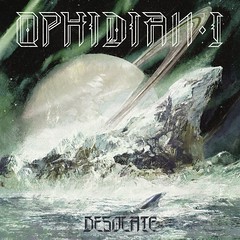 Brutal, heavy, melodic, intense, crazy, mad, bonkers, blinding, wizardry, ferocious!!!! And that is just after the first song 'Diamonds'! I haven’t had a first song blow me away like that for a while, and it really whetted my appetite for the rest of the album. If walking around the Icelandic glaciers and mountains helps you to produce music like this, then I think that every band should try it and get some inspiration.

Arriving back onto the tech death metal scene after 9 years away, the 5-piece are making up for lost time, as is shown from their intensity levels. The shredding from guitarists Daniel Mani Konradsson and Simon Thorolfsson, across 'Storm Aglow', 'Captive Infinity' and 'Dominion Eyes' is just amazing and sounds fresh whilst being played in parts at breakneck speed. Yet the composition of the songs is equally impressive, whilst maintaining their super-fast speed, the songs remain both catchy and easy to listen to, something that I have previously struggled with from bands within this genre.

The rest of the band have honed their technical skills to the highest level here, and the vocal ability of John Olgeirsson, is nothing short of brilliant, and when all put together, this album is a thing of beauty. The final two songs 'Jupiter' and 'Wither on the Vine' don’t ease up on the relentless pace, and offer conclusive proof that Ophidian I are primed and ready to break out of their beautiful country and lay siege to the rest of the world.