‘Crawling Chaos’ is a new four-track E.P. from the gothic metal outfit from Ontario. This is the first release since 2018’s ‘Restless Dreams’ and finds the band in new territory with only Lucas Di Mascio from the original line-up remaining. Utilising guest vocalist Beth Wilson on the title track and closing song ‘The Harsh Law works’ well, adding balance and some semi-symphonics to the band’s sound. 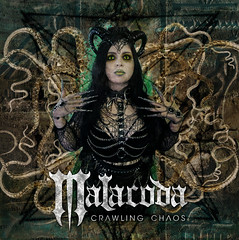 Malacoda’s sound is a fiery brand of gothic metal, with heavy riffs and pounding drums working in tangent to soaring melodies and dramatic passages of keyboards and synths. It’s a heady mix and one that works well. The epic nature of ‘Deadlights’ blasts the band into the stratosphere, the searing guitar work of Wes MacDonald underpinned by Di Mascio’s melodious keyboards. There’s plenty of oomph in the band’s music, with the drumming coming courtesy of new recruit Victor Boechat and Elie Bertrand (Scarlet Sins) for two songs each.

Their music is dark and emotional. Each of the four songs brings something different to the table. ‘The Harsh Law’ draws from the Moonspell stable yet has enough clout and direction to stand out on its own. The E.P. is well mixed and produced and for those who enjoy this cinematic impactful style of metal, one that is likely to be on the must listen pile.