Following on from their critically acclaimed full-length release, '1823' American quartet Embr are back with a new 3 track E.P. entitled '1021'. It's being released as part of the New Heavy Sounds 10th Anniversary E.P. series and the new songs follow the template set up by the album yet showcasing the bands growth and development over the past few years.

Formed in Birmingham, Alabama in 2015, Embr are fast gaining a reputation of a band who are experimenting with the doom genre, embracing many different areas of music, and combining them together to make some kick ass songs. Those familiar with their earlier work, with appreciate how their vocalist Crystal is quite adept at one moment singing like a soulful goddess before she growls like a raging tigress hunting her prey. It’s both evocative and powerful and helps to give the songs real depth and gravitas.

The E.P. kicks off with 'Vesuvius' and delivers a barrage of noise from the outset. Alan on bass, Mark on guitar and Eric on drums, perfectly in tuned with each other, allowing the haunting vocals of Crystal to take centre stage, but musically, the song is excellent, with a pummelling rhythm section which is a bit faster and more up tempo than their previous songs. And that’s before the aggressive screaming vocal hits you, giving the song a real surprise element but it combines well with the raging storm kicked up from the guitars to add to the hypnotic drumming. 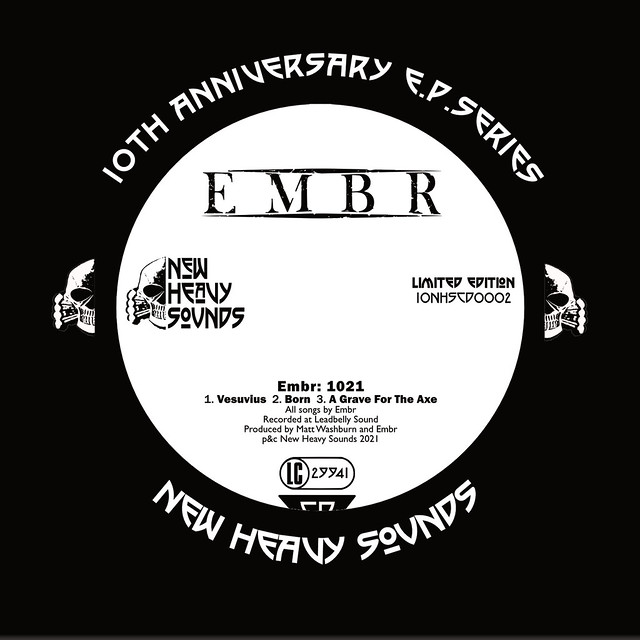 A dramatic bass tone summons the beginning of 'Born' with plenty of feedback for good measure, and then the heavy drums allow the song to drift along, the perfect accompaniment to the melodic, soothing vocals from Crystal, then mid song, the tempo kicks up a few notches, allowing for more dramatic vocals and more heavy doomy goodness.

The E.P. is wrapped up with final track “A Grave for the Axe” and it’s a crushing opening that kickstarts the song, before the tempo is slowed, a haunting whisper delivered, the melody is spellbinding, with the depraved howling adding so much depth to the song. They flirt with the listener, as the song has some memorable hooks, making you twist and turn, but this is the heavy experimental doom that people need in their lives, and Embr are taking on the genre and starting to make waves.