Watching the video to 'Inner Self' for the first time, buying 'Beneath the Remains' on vinyl, seeing them live for the first time in 1991 at the International II in Manchester are all Sepultura memories firmly etched into my mind.

They are now set to release 15 songs that formed part of their weekly 'SepulQuarta' project that begin during quarantine last year. During lockdown, the band had 57 guests on their Youtube channel, some of whom have been artists who influenced the band, and they played their songs without limits, which allowed them to experiment in a new and innovative way. 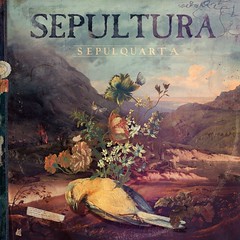 As with every release like this, it has its talking points, no versions of 'Troops of Doom' or 'Mass Hypnosis', but the band have covered a wide variety of songs that they are clearly passionate about, and that will do for me. From the drum roll on opening track 'Territory' with David Ellefson, which takes me back to hearing it for the first time, Green is on top form, and adds so much more to each song vocally and this is quickly followed up with a rip snorting version of 'Cut Throat' with Anthrax’s Scott Ian.

With Sacred Reich’s Phil Rind, they deliver a brutal version of 'Inner Self' which sounds really rough, like a brand-new song being recorded for the first time and it’s a reminder that this is emphatically one of the greatest thrash songs of all time, and if Phil doesn’t appear on stage with them in November to perform this, then I’ll be having a word!!!

The tracks come thick and fast, with appearances from Danko Jones and Devin Townsend, before you get to one of the standout performances, 'Vandals Nest' with Testament legend Alex Skolnick. This is phenomenal, with exquisite guitar skills, as you’d expect from Skolnick, and adds more fire, passion and vigour to the song.

But it’s on 'Ratamahatta' featuring legendary Brazilian drummers Joao Barone and Charles Gavin, that the band dig back into their roots and remind us where they come from and what influences they had as you can feel the beat emanating for the favelas. This is a classic in every sense of the word.

Next up is Death Angel’s Rob Cavestany, helping to deliver an audible barrage of brutal heaviness on 'Apes of God' but it’s the updated version of 'Slaves of Pain' featuring Kreator's Frederic LeClerq and fellow Brazilian thrasher Marcello Pompeu from Korzus, that will blow people away, no words can do it justice, as it’s simply THAT DAMN AMAZING!

The final song is 'Orgasmatron' a live favourite and it’s fitting that it’s performed with Phil Campbell, to bring to an end a series of unique performances of Sepultura’s music from the many phases of their career. All you need to do now, is sit back and enjoy.