E.P. Review: Lorna Shore - ...And I Return to Nothingness
Reviewed by Matthew Williams

Following on from the release of their third album 'Immortal' in January 2020, American deathcore outfit Lorna Shore are back again with a blistering 3 song E.P. entitled '...And I Return to Nothingness'. Following a tumultuous few months after their previous release, or as drummer Austin Archey recalls it “a trial by fire”, the 4-piece from New Jersey are back with new full time vocalist Will Ramos in tow and are ready to push boundaries further than before.

Each of the three songs has its own identity and as guitarist Adam De Micco explains they “display the characteristics of who we are as a band” and “the E.P. features 3 songs that we feel sums up and identifies the band in a way that we see fit”. 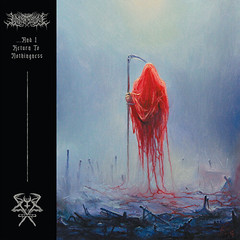 Opening track 'To the Hellfire' has a gentle opening to it, that really does not prepare you for what is coming up. The gut-wrenching vocals of Ramos will make your body feel a bit cold, as its spine chillingly scary, sounding almost computer generated at times, and I say that as a compliment, as his range is vast. The mid-section drop in tempo, is brilliant, like they have lured you onto the ropes before delivering a knockout punch, whilst the last minute of the track feels like they are extracting the soul from your body.

'Of The Abyss' begins with an eerie choral chant, setting the tone for the rest of the song before the rapid-fire drumming of Archey takes over the track. It has more of a black metal symphonic feel to the song, with a wizardry twin guitar assault from De Micco and Andrew O’Connor, before a really slowed down section, which stinks of pure evil.

The eponymous last track has a spooky opening sequence but shows more diversity musically, the guitars are not as fast, but more cultured and melodic in their approach to the song. The band are showing that they are not all about breakneck speed, and the solo in the middle section is perfectly executed, and whilst the ending is tame, it wraps up the E.P. to such a point, that it leaves you wanting more.