If you had to describe Aborted as a type of vehicle, what would you choose? Far too fast to be a steamroller, despite their relentless and destructive approach which levels all in their path. Far too intense to be a shining sports car. No, Aborted are some kind of indestructible armoured tank, intent on smashing down boundaries and delivering the results without fail, challenge or obstruction.

‘ManiaCult’ is the Belgians 11th full length release, and it continues where 2020’s ‘La Grande Mascarade’ EP and 2018’s ‘Terrovision’ left off. The album forms the soundtrack to the cult that summoned Lovecraftian demons via human sacrifices. The sound is neck snapping, typically brutal with vocalist Sven de Caluwé in demanding and snarling mood, a mere 26 years after forming the band in Belgium. De Caluwé may be the only original member in Aborted but this first long player with current line-up, completed by drummer Ken Bedene, guitarist Ian Jekelis and bassist Stefano Franceschini, demonstrated that there can still be evolution in extremis. ‘Terrovision’ moved the band a step further away from the early death grind towards a maniacal shredfest, whilst retaining much of the jagged visceral edges that the Belgians have always pushed to the front of their sound. ‘ManiaCult’ maintains that momentum with an intensity that at times leaves you gasping for air.

There’s massive riffs, extreme technicality and ferocity that is equal to 100mph tropical storms in the 40 minutes that ‘ManiaCult’ rages. Little time to pause for breath, it’s a brutal Panzer Division on full attack; the chugging groove that underpins the band’s work rarely causing anything other than a minor obstruction in the aural assault that is unleashed on the title track which rips open a raw wound after the intro ‘Verderf’. 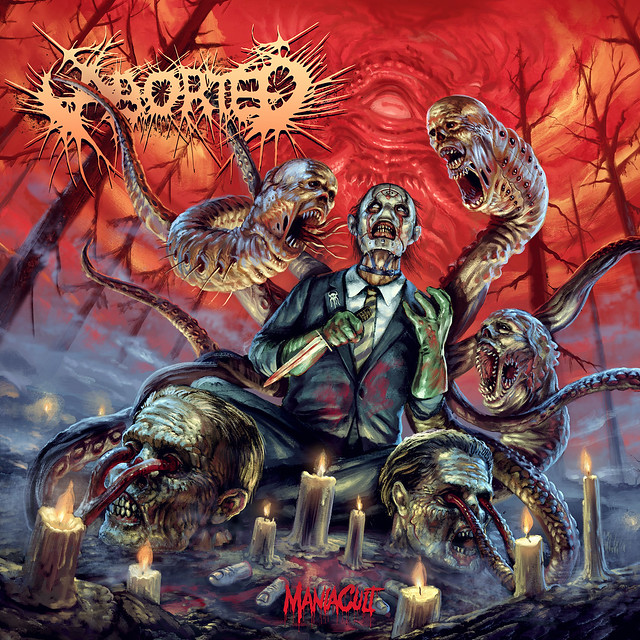 ‘ManiaCult’ is a dark, atmospheric record. Some of the tracks here are faster than anything the band has ever produced before. ‘Portal to Vacuity’ and ‘Impetus Odi’ reek with a blackened feel, whilst there is plenty of opportunity on songs like ‘Grotesque’ and ‘Dementophobia’ to revert to the old style cranial cracking approach. There were no ‘poop’ songs on ‘Terrorvision’ but Aborted deliver a double dose of filth with ‘Grotesque’ and ‘A Vulgar Quagmire’ dragging the band back into the lavatory.

Although the themes can be interpreted in many ways, Aborted focus on the horrific acts committed by the ManiaCult whilst throwing the question of mental health into the pot – was it all happening in leader Wayland Thurston’s head, as well as touching on the control of the masses by church and state. It’s full throttle, with only the gentle ‘Verbolgen’ allowing brief reprise from the intense battery. The album concludes in fine style with the atmospheric opportunity with closing song ‘I Prediletti - The Folly of the Gods’ a cacophony of blackened death metal of the highest quality.

It may be 26 years but Aborted show no signs of slowing. With a typically horrifying album cover included in the package, this is a beast of an album that reminds us how intense one of the most seminal death metal bands of all time remain.