The world might well be going to Hell in a hand-basket but Crazy Uncle Al can always be guaranteed to provide the best soundtrack for such a journey. Having been threatening to hang up his boots since 2008’s C-U-LaTour – I’ve still got the “Adios Mother F***ers” shirt from that years’ Graspop festival – the world just keeps coming up with more and more inspiration.

Having produced some of Ministry’s finest material since coming back with Relapse in 2012, following it up a year later with From Beer to Eternity and again in 2018 with AmeriKKKant, the promise of a new Ministry record is enough to get you salivating.

Purportedly three years in the making, Moral Hygiene feels like a more direct album that its predecessors, with the guitars seeming more dominant in the band’s overall sound than they have over the passed couple of albums. Moreover, Ministry feel more stripped back than they have in a while, leading with meaty, heavy riffs, played over pummelling drums, especially during the album’s first half.

It seems that in Alert Level and Good Trouble Al and co are channelling their inner Killing Joke, as the industrial element are still present, but are being kept in check. Sabotage is Sex sees previous Jourgensen collaborator (in Lard) Jello Biafra take centre-stage during the swift chugging of punky-guitars. A cover of The Stooges Search and Destroy features a vocal performance that is strangely warm and comforting, propped up by an enormous bass line. 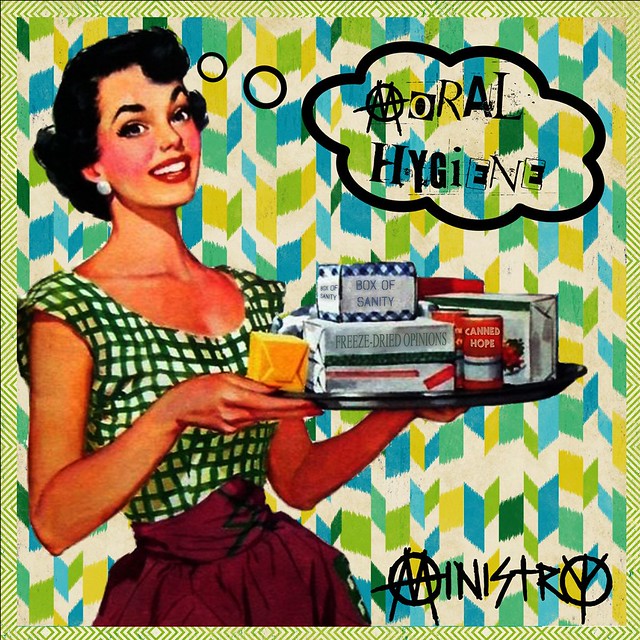 The first foray into the industrial side of Ministry comes with Disinformation; rapid fire drumming and rumbling bass underpin a series of samples, taking a nihilistic stance and outlining strategies of demoralisation. Ultimately, the message of the song is to encourage the listener to think critically about everything that see in the media – be that main-stream or social.

It wouldn’t be a Ministry album without making a political statement and this is apparent in a cursory glance at the track-list. The aforementioned Alert Level and Disinformation, alongside Broken System, with its 60s shamanistic opening and climate change message; We Shall Resist’s heavy keyboard soundscape and oppressive, Orwellian vibe; and Death Toll whose industrial beats count off the Covid mortality figures against a sample of Televangelist Kenneth Copeland who, in March of this year, executed judgement on the virus and declared it over.

Mr Jourgensen’s opinion of former President Donald Trump does not seemed to have softened since the recording of AmericKKKant, at least if Believe Me and TV Songs #6 are anything to go by. But the world has moved on to more pressing issues of climate collapse, hyperinflation and authoritarianism among many, many others. So, with this being the case, it doesn’t look like those retirement pipe and slippers will be getting much wear anytime soon; and if Ministry keep putting out albums of this quality and range then I hope they’ve kept the receipt.