E.P. Review: The Troops of Doom - The Absence Of Light
Reviewed by Paul Hutchings

Last October saw the arrival of The Troops of Doom and their E.P. ‘The Rise of Heresy’. Now the Troops are back with E.P. number two and it’s another primitive 25 minutes of thrashing death metal.

You may recall that the band, formed by Sepultura’s original guitarist Jairo “Tormentor” Guedz had one mission: “revisiting the essence of ‘80s-style death metal, exploring a more primitive sound that takes listeners back to that era, while remaining fresh, genuine, and ferociously heavy”. ‘The Rise of Heresy’ was a fine slab of the old school, raw and visceral and the band have continued in the same vein with ‘The Absence of Light’. Guedz is once again joined by his partners in death, bassist/vocalist Alex Kafer, drummer Alexandre Oliveira and guitarist Marcelo Vasco.

This time around the band have crafted a conceptual piece, inspired by the book Leviathan, from 17th century English philosopher Thomas Hobbes. The intro is a dramatic cinematic soundscape, a full orchestral composition conducted by Dave Deville that builds the tension. There’s a brief pause before Guedz and Vasco unleash a filthy riff and things get gnarly. This is definitive old school, the band once again channelling that brutal mix as we explore ‘Act I: The Devil’s Tail’. It’s savage, with a delicious groove-ridden breakdown that forces you to bang that head before an explosion of thrash goodness roars the track to an atmospheric conclusion. 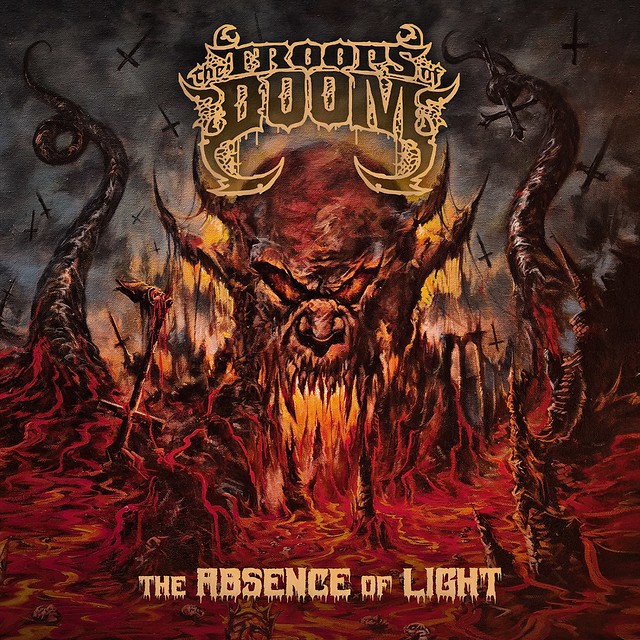 The segue into ‘Act II: The Monarch’ is sublime, acoustic guitar leading to a massive riff and another compulsive thrasher which sees Possessed frontman Jeff Becerra share vocal duties. It’s a brutal track, full of evil intent, underpinned by a battery of double kicks and a driving rhythm that allows Becerra to give full throttle. The demonic flavour is enhanced by the presence of Lars Nedland of Borknagar, who adds bass to this and two other tracks on the E.P. As on the debut E.P., The Troops of Doom add a Sepultura cover. This time it’s a feisty version of Antichrist, which once more shows nothing but respect for the original.

The band bulk out this E.P. with the demo versions of ‘Act I’ and ‘Act II’ which provide a nice demonstration of how the tracks have progressed. With a quality production mixed and mastered by Øystein G. Brun (Borknagar) at Crosound Studio in Norway and stunning cover art by Brazilian painter Maramgoni, this E.P. is the ideal bridge to the forthcoming full-length album and promised, but much delayed European dates.