So Conjureth are a band who have piqued my curiosity only very recently and, following some teaser listens to a few tracks off their upcoming album I was excited to give this a go. The band are a very recent creation having formed in the San Diego, California area of the United States where in 2020 they released their first two Demos titled Foul Formations and The Leviathan Manifest respectively. Then come earlier this year the band went on to announce how they would release their first full length studio album titled Majestic Dissolve. But not only was this record significant for being their debut full length piece, it would also be their first release since being signed on to Memento Mori. So let’s have a dive in to Majestic Dissolve and try to decipher what precisely the band will have in store for us come release day.

The riffs here are erratic but not to a needless degree. The guitar work also possesses this peculiarly electric sound to it, in the vein that the riffs aren’t being kept down to the ground against their will. The band are letting their riffs fly out and be given freedom when they’re performed; when you listen to the riffs and solos you’re able to hear all the power and malice the band want you to experience. Now there are riff segments where the guitar tone adopts a chunkier and more disciplined nature and the purpose for these sections does seem to root us back down to earth in opposition to the soaring and nigh on schizophrenic riffs that are evidently the bulk of Conjureth’s style of songwriting. It’s not that the riffs are of a particularly erratic nature in the style of a technical or progressive death metal record, it’s along the lines of riff pieces that are allowed to really develop and evolve without the band just cutting them short. The guitar work likes to reach high into the sky for the effect they’re going for and it certainly helps to create a scathing and dangerous atmosphere.

For the most part the vocals are this fairly rudimentary growling technical that is one of the most grounding elements of the record when juxtaposed against all the swirling and nightmarish riff pieces, if the vocals didn’t possess such an element the band may have been at risk of losing their feet and that way the band would lose people’s engagement because they wouldn’t feel like there was anything they could tread on to remind them of their footing. But then you have the raspier, snarling vocal variation that can easily be compared to Carcass’ own Jeff Walker. It’s this more seething and bloodshot eyed vocal performance that really instils the heightened aggression and ferocity the record descends upon you. Usually, this vocal technique would still be great to hear and experience yet alongside the riffs herein the two forces mingle together really seamlessly. The combination of erratic riff and snarling vocals establishes a record that’s practically weaponised. 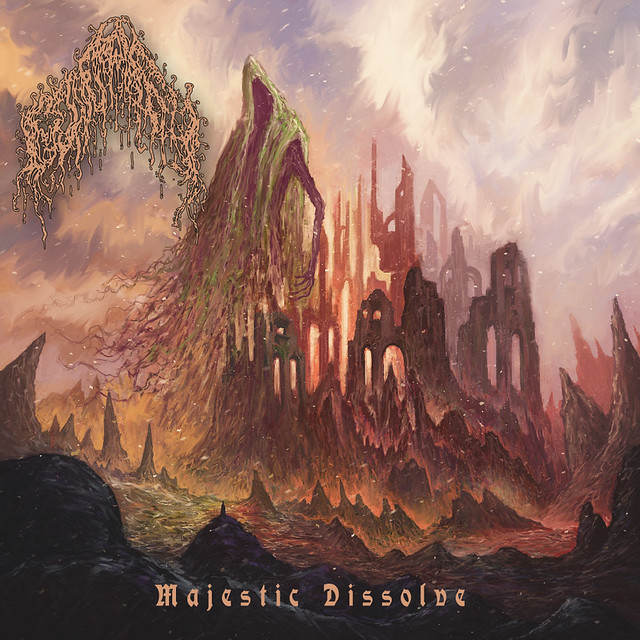 The drums are also fairly similar to the riff work’s erratic personality as well, in the respect that while we may be receiving some double bass work or crashing cymbals throughout a track here and there the drums are forever injecting something new or from left-field not simply to maintain their entertainment but as if to consistently attain that maddening ambiance. This isn’t an album that wants to be held down by chains to a rooted and grounded space, it wants to break free and go rabid. This record is begging to go on a killing spree and the drums, through their eclectic and haphazard motions that differentiate as the band interweave varying displays of the full kit throughout the riffs and vocals, certainly do their part to recreate the semblance of a mind ripping apart its own synapses.

What’s most curious about the songwriting is how the band create the illusion of speed, even when we can recognise the band are already playing at a fast pace. This is already a short album and the track lengths herein do demonstrate such, however even though the band don’t play slow or anything ascertaining to a steadier pacing throughout any song at all it seems to go by so much faster specifically because of the style of riffs the band utilise here. The band play pretty quickly that much is guaranteed, but it’s good to recognise that you’re easily able to follow the strings of chaos the band emit even when the riffs do adopt that more maniacal and insane edge to their performance. Since the riffs do like to often burst into misshapen form and blistering inclines of intensity, they create that illusion of speed that is amplifying an already frantic record that’s forever baring it’s teeth, saliva dripping from gnarled fangs.

In conclusion, Conjureth offer up a record that gives you all the death metal you’d want from a modern band that’s not afraid to cut loose from time to time however it’s the songwriting that really sets them apart from their various peers. It’s not simply an aggressive personage just because the band wanted something angry for their fans to sink their teeth into, it’s that haphazard and unsure direction the riffs possess as they’re played that crafts such an effect. The riffs fly from one place to another however it’s never so drastic or sharp in the directions they take that you can’t follow where the music is going. It’s like digging the tips of your fingers into the crevasses of a wall and hoping you can hang on for dear life as we’re caught in this monstrous vortex. All in all the band keep things pretty straight forward with a runtime that doesn’t eat away for very long making this already frantic feeling record feel so much faster owing to the nature of guitar work the band use as the backbone to Majestic Dissolve. I’d certainly give this a recommendation and particularly more so if you’re after death metal that doesn’t feel so keenly bolted down and is allowed to be set free and cause all the mayhem you’d wish to hear