Manchester’s Bread Shed has firmly established itself on the city’s live venue scene since 2017. This has happened down to the fact it is a perfect setting for a weekend festival such as this. The Riffolution Festival is sold out and by the time logistics and taxis' permit me to arrive at the venue most of those tickets have already been exchanged for wrist bands.

Deltanaut, arrive on the second stage and immediately spring into their spacey stoner catalogue. The warm groove washes over an eager audience forcing bodies to sway and heads bob. Their sound is heavy with guitar, bluesy at times, psychodelic at others. Solos glide into the air leading the well written set of songs that are mainly instrumental from their 'Part 1 - EP'. Repetition is their friend in many sections, and why not! If you can create a riff as good as they do, keep blasting it out. The music is smooth, loud and groovy at times; but always enjoyable.

The change-over time between stages is brief to say the least and Cybernetic Witch Cult don’t waste any time firing out 'Cromagnonaut' from their recent album 'Absurdum Ad Nauseam'. The opening guitar riff from this track forces the crowds heads back, and then the aggressive power of the main riff forces heads forward. Cybernetic Witch Cult for some criminal reason seem to have cut their set down by several songs. This is a shame as personally I love this band. The groove this band create is so good you can hold it, the sci-fantasy tinged tunes are perfect for today. We have a couple of treats to receive; one being the introduction of Aimée Wild on keyboards and Danny Crash on drums; next being a new track 'Orb Chaser' that seems a little more giddy in its pace . All the while, through this set, Mr Crash shows his impressive drum skills; which are both frantic and precise. The thumbnail of a set is rounded off with the awesome 'High King (King of the Horse head Nebula)'” demonstrating the quality of this band and their ability to create world class stoner tunes to bring a smile and damage neck muscles.

Again on the main stage Ritual King are on home turf; a warm welcome bolsters this fact. The heavy stoner/psych blues band with flurries of jazz have a guitar player in Jordan Leppitt who is so at one with his Les Paul it’s unreal. The sounds and breaks that this guy can effortlessly pour into the afternoon is glorious. If you are unfamiliar with this band but do have the music of The Vintage Caravan in your collection, I can assure you, you are already a fan. The track 'No Compromise' has occasional jazz guitar sections followed by a monstrously heavy riff forcing the crowd to bang their heads in time. The mellow drum and bass accompaniment is just as impressive as the lead work, and with most of the set taken from 2020’s self titled album known to many fans in the large crowd.

Then a ten minute new song is unveiled, giving listeners something new to digest, before the amazing 'Valleys' brings this soothing display of heavy, guitar based music to an enjoyable conclusion. We can sleep well in the fact the new material is just as breathtaking as the existing.

Swansea’s Sigiriya take their places on the second stage and break into their slightly grungy dirty doom with a stoner topping. They play a gut punching mix of distorted riffs loud and powerfully. There is a hint of Soundgarden in their music, and a hint of Kim Thayil in their guitar play, both in sound and visuals. This set is drenched in solos with controlled feed back, hypnotic timing and thunderous vocals. There are many fans of this band in the audience and they have just gained at least one more in me. 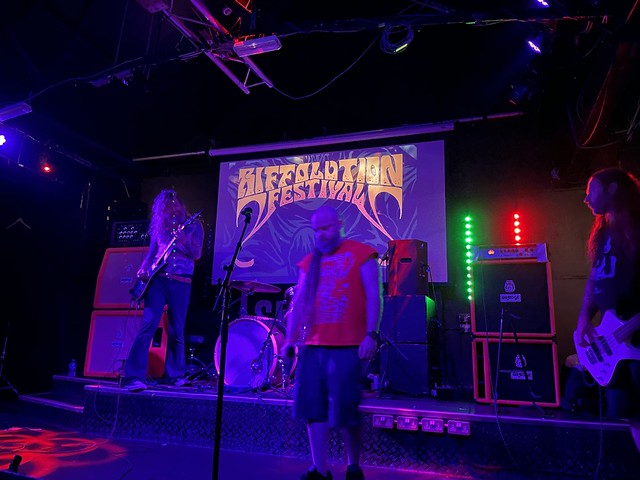 When Sea Bastard drag their tattooed knuckles onto the main stage they make all who have played before sound as though they were playing thrash metal. The band open and drink a bottle on stage in celebration before the slow grinding riffs thrust themselves onto the crowd. The vocals growl, the bass and guitar growl, hell even the drums seem to growl in this punishing display of perfectly executed sludge doom music. The music slowly pours down from stage onto the crowd like a molten metal crown. The riffs seep out slowly in a distorted fashion, sometimes the riff lingers in the air for a while, before reaching its destination, but this is the joy of this band. This experience is not for all, but for those who bathed in this intoxicating sluggish encounter, the miserable music brings many a smile to many a face.

The marvellously named Chubby Thunderous hit the second stage as if they were the head line act themselves, and the size of the crowd that knows their stuff proves they could actually pull this off. The bouncy riff rock exhibited here is enjoyable and has an element of a party going on. Repetitious stoner riffs flow from the musicians in corpse paint drawing out the first pit of the day. And this is not just a mere suggestion of a mosh pit, oh no, people go flying, people are picked up before they return to the melee with a grins and urgency.

This lot know how to shape a song; a skill a lot of other band have yet to perfect. The vocals sit back in this live mix letting the music do the talking. An impressive rendition of Black Sabbaths 'Children Of The Grave' is just thrown into the set list as if it is was one of their own. The riffs are lapped up by the audience until the band are finished. Not once has the doomy music ever brought the mood of today down, but the music of Chubby Thunderous has certainly elevated it. 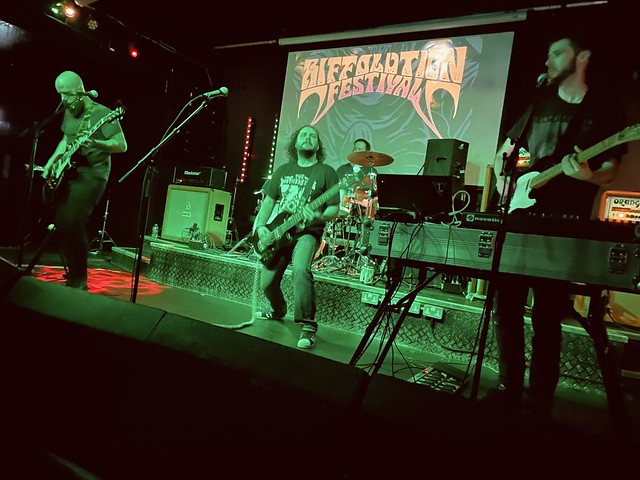 The warm happy celebratory feel is carried over to the main stage where Elephant Tree are about to begin their special stye of stoner tunes. The excitement in tonight’s crowd can be felt as well as seen. The band look happy to be here, all are happy, and this momentum is carried through out the whole set. There are not many people in this room tonight who are not aware of the enticing hypnotic tunes of Elephant Tree. The mood in the venue at this moment has not yet been witnessed. It can only be described as joyous. Today will be a first live encounter of this band for some audience members; it will be a memorable one.

The spacey sludge style is a perfect headline for this Riffolution Saturday night. Guitars mix solos and riffs with the clean soaring vocals. The bouncy music translates into bouncing heads and necks. Some have their eyes closed just lost in the distorted joy of the moment. This is not just assisted by alcohol, it’s the tunes and the atmosphere that do that.

Nice one Saturday! Time for just one more pint I feel.