The term 'legends' is often overused in this business, but in this case, Bay Area Stalwarts Death Angel, there just is no other term to use. Bursting onto the scene in 1987 with a quite astonishing debut album 'The Ultra Violence', the title taken from the novel and film 'A Clockwork Orange', and famous for drummer Andy Galen only being 14 at the time, it was an instant classic, and even before that they had the cult 'Kill as One' demo produced by none other than Kirk Hammett. Two more albums followed to various degrees of success, the slightly controversial, due to its more experimental nature, 'Frolic through the Park', and the overtly commercial 'Act III' before the band called it a day in 1991.

The members then went their separate ways, some went on to the more rock oriented The Organisation and after that Swarm, before regrouping with 4 out of the 5 original line-up for the highly anticipated, but slightly disappointing, reunion album 'The Art of Dying' in 2004. Since then, they have been very much active, albeit with a few member changes in the rhythm section, and have released five albums since the reunion, the latest being 'Humanicide' in 2019.

During the later stages of the European leg of 'The Bay Strikes Back' tour the world got hit by Covid, which of course scuppered everyone. Like many bands, Death Angel found themselves unable to tour and having just released an album, found themselves at a loose end. That's not to say they haven't kept themselves busy, last year saw them release a 4 track E.P., with one new track, a couple of acoustic versions of older songs and an ambitious cover of the Queen and Bowie classic 'Under Pressure', the latter to a mixed reception.

Now a year later they are back with a live album, missing the thrill of performing they crank out a live set of fifteen songs that are not what some fans might have expected. There's no 'Voracious Souls', 'Mistress of Pain' or in fact any tracks from the debut, or more famous songs like 'Stop' or 'Thrown to the Wolves' for instance. No, this is an album of 'deep cuts', this collection is from songs rarely played, or in some instances never played at all. 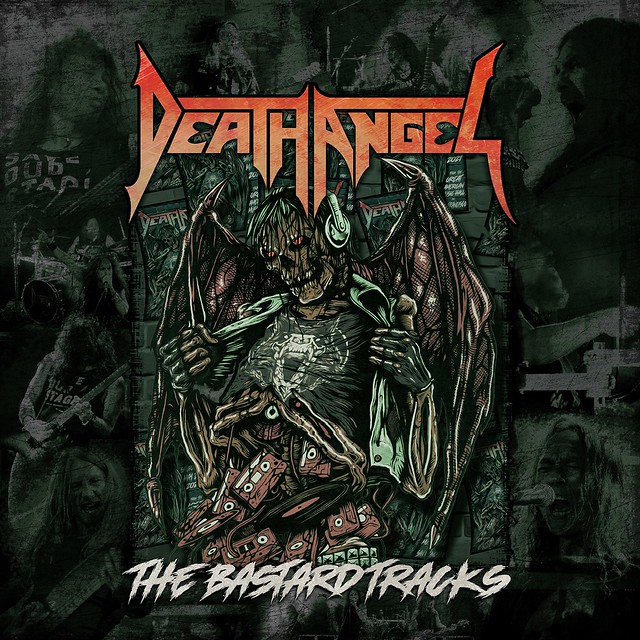 The tracks span the majority of the bands back catalogue, with only the aforementioned 'The Ultra Violence' and 'The Art of Dying' not represented, but the majority come from the last four studio albums. Kicking off with the opener from 'Killing Season' is the bruising 'Lord of Hate', after a cracking acoustic intro (all thrash albums should have one) is a four minute riff fest with a shout along chorus. 'Where They Lay' is the first single and video release, and is a vicious track with a stabbing, rhythmic guitar punch and a howling vocal. 'Why You Do This' may be a bit more familiar, blending classic thrash/crossover riffs with more experimental and catchy progressions.

The staccato riff brilliance of 'Fallen' and the slower sinuous groove of 'Absence of Light' come before the mid-tempo swagger of 'The Organisation' from 1990's 'Act III'. ' Execution / Don't Save Me' and 'Succubus' are solid thrash affairs, but the pair of 'It Can't Be This' and ' Let The Pieces Fall' from 2016's outstanding (and for me their best after the debut) 'The Evil Divide' are the mid-piece album highlights. I must admit I was surprised by the mini acoustic set of 'Faded Remains' and 'Volcanic' (where Rob takes over the vocal duties). Both tracks are full of raw emotion, but they do sort of stop the momentum, and 'Faded..' just isn't that good a song I'm afraid to say.

No matter, they redeem themselves with a cracking cover of an old Black Sabbath song from the Dio era 'Falling off the Edge of the World', foregoing the intro and slow front half of the song, apart from that super heavy chord progression, they turn the second half's fast section into their own. The final salvo sees them dusting off the old thrasher 'Guilty of Innocence', a fast, gnarly, old beast and is a personal fave of mine, before finishing with a newer one and the only song composed by rhythm guitarist Ted Aguilar; 'Alive & Screaming' a punk infused rager.

I really like this album, and I applaud the band for doing something that is "outside of the box", it's something that more bands should try. The sound for this is excellent, there's a real quality to it, it's raw, it's not perfect and it's got all the warts and little imperfections that go with a live gig. My only slight gripe being that Ted's guitar is slightly low in the mix at certain points. But the performance is excellent, the rhythm section is super tight, and the guitars have a great tone while Marc’s vocals are his usual unique blend of melody and screaming. This is a great way to support the band, and if you're a fan of Death Angel's unique take on thrash, I recommend you check out his rather special and novel release.