“Another year lost in the wasteland” is a prevalent line in the first track on King Buffalo’s new album 'The Burden of Restlessness'. Its is an obvious summary of the year felt by this band, and others, consisting of cancelled plans and time spent twiddling thumbs instead of rocking heads. It’s obvious though that King Buffalo have not wasted all their collective time as the more synth elements from the previous 'Dead Star' E.P. have been stripped back letting the other elements of their psychedelic rock take more lime light. 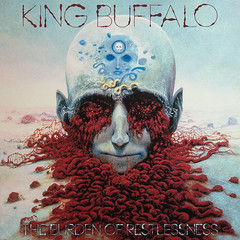 The first track 'Burning' has a brief broody beginning where bass guitar and drums build the atmosphere. The little guitar part just lights the way for the listener until the bass player, Dan Reynolds, decides it is time to show his quality; his quality is impressive. In fact the rhythm and tone of this opening track is most enjoyable. Sean McVay’s vocals are on point and never in your face, they are a kind of spoken tunefully style and they sit perfectly with a tune that builds to a head nodding conclusion. You know when you listen to just one track of an album and you are sure you are going to like the album as a whole? Well I experienced this on my first time round.

This was not a big build up to a fall, I do indeed like this album. It is clever, relaxing and rocking at the same time. This trio produce well-crafted songs with a progressive aspect; but that aspect is never stabbed into your brain, it is subtle and dare I say it, perfect. The drums and bass always work well creating songs to let the words shine, they wait holding the rhythm faultlessly until the time to pounce arrives. A hint of Billy Corgan exists in some of the riffs, again adding to the subtle power of this album.

It is beautifully mixed by vocalist and guitar player McVay, who obviously know what sound he wants the band to take.

This is the first of three albums to be released by King Buffalo, yes three. It seems like the time in the waste land was well spent.