When you want something downright nasty, Manchester’s Wolfbastard are just the job. About as welcome as a dose of the clap, one play of their third long-player, the sensitively titled ‘Hammer the Bastards’ and it’s an experience which is effectively the blackened thrash equivalent of a colonoscopy minus the local anaesthetic. 13 songs that rip at you from the off, this is a real dose of aural salts that rip through the gut in a mere 31 minutes. It’s fast, furious, aggressive and a sheer frenzy of raging riffs, battering drums and the brutal vocal delivery of one Derek Carley, better known as Dez, frontman of Burial and latterly Foetal Juice.

Opening with the bruising ‘Can’t Escape the Grave’, this is as explosive as you’d expect. Drawing deep on influences from Venom, Motörhead, Darkthrone and Discharge, Wolfbastard are as subtle as a size 12 boot to the nuts. And it’s fantastic. Like sandpaper being dragged over the knuckles, it’s punch after punch which will force the breath out of you whilst at the same time slap you across the back of the head. If you’re looking for any subtlety, then you’re about a million miles away from it. 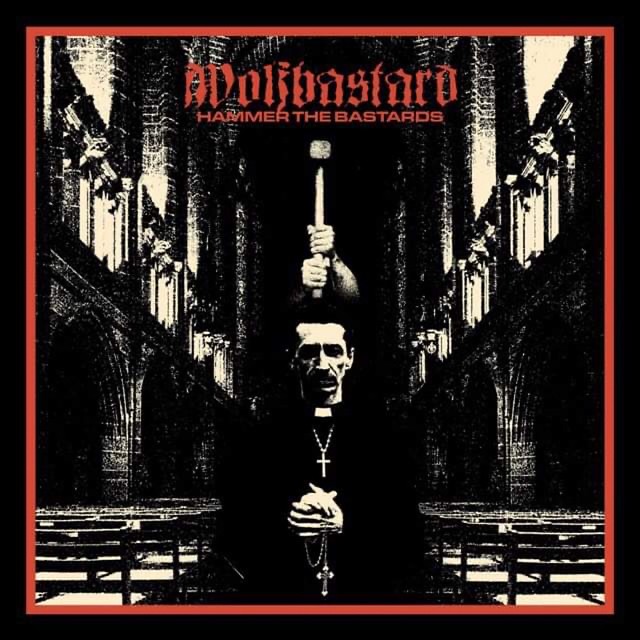 Each track on this ferociously visceral record brings the hammer down hard and fast. Oh yes, there is a pace about this release that even Usain Bolt can’t compete with. The slowest moment comes with the intro to the title track, and that lasts a mere minute before Wolfbastard erupt once more. You can feel the skin burning as this abusive, aural assault is unleashed. Tracks such as ‘Buckfast Blasphemies’, ‘Morbid Fucking Hell’ and the ‘Pissing on Sacred Ground’ are irreverent, bludgeoning and addictive.

‘Hammer the Bastards’ is antagonistic, the combination of D-Beat, hardcore, blackened thrash and crust punk in a barely concealed fist which slams repeatedly. Dez’s vital riffing is supported by the thunderous bass of Si Fox who joins in on vocals, whilst fellow Burial beast Dave Buchan batters seven shades out of his kit.

Arriving on a variety of formats in the New Year via their new label Clobber Records, ‘Hammer the Bastards’ is exactly the antidote necessary for another year of likely despair and frustration. Described as a ‘nihilistic sonic assault to accompany the death throes of our pitiful species’, this is an album that will bruise, savage and maim. You can’t get this on the NHS, along with virtually anything else these days. Embrace the Wolfbastard; become one of the pack.