Let’s open up 2022 with a bang. Straight out of the gate near enough we have the newest and debut album from Nullification, and a personal first experience of a metal band originating out from The Philippines. It interesting how we’ve now arrived at a point in time whereby bands may have started out during the pandemic and Nullification are demonstration of that fact, having formed back in May 2021. Therefore, this is a very speedy formation as well as a rapid fire creation of a debut album too. I was particularly interested in this album as well considering that January can be a little up in the air sometimes with what albums are being released, I’d never heard of Nullification therefore I felt like I should give them a go. Let’s have a look to see what the band’s debut album is capable of offering us.

Opening up with an extended introduction the band give us intermittent horns that’s underlayed with string sections and a swirling, synthesised background towards the further reaches of the band’s sound. Introductory tracks can be tricky to get right but I believe Nullification get it right herein as it doesn’t just feel like a prelude to their main body of work, it feels like it’s own dedicated performance and possesses just as much importance as the main record does. It’s an atmosphere of unease and encroaching, foreboding horror that awaits us. This is all the more apparent as it bleeds effortlessly into the first real track of the album without the atmosphere or projection missing a beat.

The first real instrumental element to the band that struck me was how organic the drums feel. To the strike, the Tom-toms feel light and haven’t been wrought with a particularly taut aesthetic. The sound they emit harnesses the springing and fluid nature the drums possess here as they don’t merely feel rooted to the earth as if in some macabre marionette. The drums are given the room and space to guide the listener in exploring the deep and wide openings this album enables them to traverse through. It’s through this light to the touch but piercing performance that allows the listener to fully engage themselves with just how expansive the album’s sound really is without feeling the full weight of its size unnecessarily pressing down on them. With that said however, the bass drums from time to time really do a great job at accentuating the real power and malice the drums also possess with periods of bass drumming that massively engorges the breadth of the album’s sound. These moments showcase the band’s capacity for a thicker, denser atmosphere, therefore it makes it all the more curious how Nullification choose to let the listener breathe. 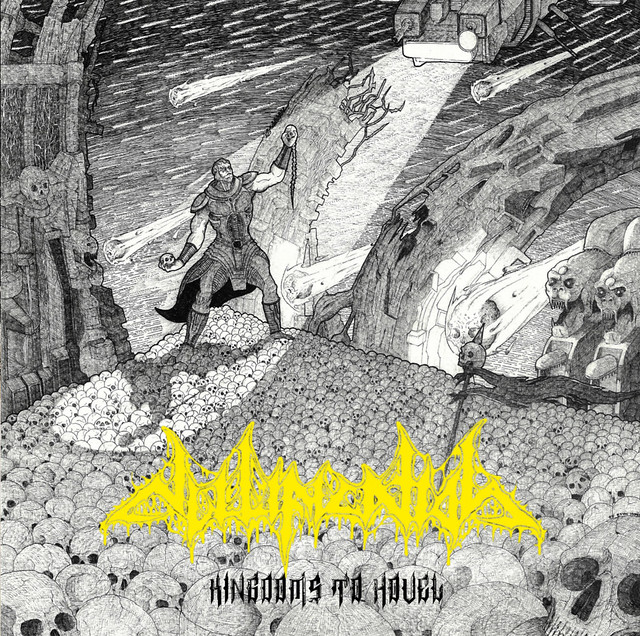 The guitar tone here is one of a fairly savage nature. It’s this deliciously ripping affair that not only allows you to experience serious injections of speed and ferocity, but the guitar work has been tweaked and mixed in such a way that any minute alterations in riff directions or chords or songwriting allows the guitar work to be meticulously picked up on by the listener. Experiencing the riffs therefore, is a joy because the listener can note all the small minutiae that’s going into the guitar performance. Soloing follows the same line of thought too where individual notes can be heard more clearly, allowing the listener to feel more engaged and therefore more responsive to the band’s output. There are occasions wherefore the riffs can feel somewhat drowned out by the drumming and vocals. As a result, I feel like the mix could have been adjusted just so slightly, especially as there are times where it’s difficult to make out what precisely the riffs are providing at some given moments.

Much like the drumming here, I was taken by how springy and light the basslines could be throughout the record. It’s an instrumental aspect of the band that isn’t immediately apparent to your experience here I believe, however once you’ve picked up on it you’ll forever be looking out for it once more. Much like how the drums do not possess a taut or strict binding to their sound, the bass work here doesn’t seem to pound down to the earth. Instead, it has this bouncing aesthetic that will crop up now and again depending on what track you’re listening to; the basslines aren’t always following the primary guitar riff either. Here the bass demonstrates itself as a fully fleshed out and functioning force which the band utilise to provide their sound with a greater dynamic. As a result, the bass is like another guitar that has chosen to fall back and produced us with riffs scheduled behind what you’re initially hear.

I utterly loved how the band’s collective performance at times comes together to create this rolling and barrelling force of nature that you can’t help but want to dive into. It’s these intermittent moments of rolling, pounding onslaught that really bring the band’s full size to bare on us. The band’s makeup may seem pretty light and springy from time to time, it’s why I feel these segments of devastating power are so required. Couplets of doubles or triples seem to penetrate the fabric of the songwriting from time to time in that classic thrash attack you’ve heard so much from the genre’s legendary heyday. I found it curious how these segments don’t start coming into force until you’re into the back half of the album, thereby introducing you to something new afield within the album’s songwriting. By not subjecting us to the rolling thunder immediately, it comes across as much more fervent and malicious because the band haven’t just tried to shove it down your throat from the first, opening second.

In conclusion, this album ended up surprising me a little. From the immediate onset of its runtime you’ll think that it’s a particular kind of album but the more you dive into it, the more you’ll learn just how dynamic and diverse it may actually be. Throughout its runtime the band give you plenty to sink your teeth into which feels all the more savoury as the band unveil their ability for a bass-driven, engorged sound that really manages to deliver additional bouts of ferocity and sledgehammer impact that drive the power this album has home. I find that January can be a tricky month sometimes, you can get some pretty run of the mill released but then again, I sometimes find potential AOTY contenders here and there. Nullification’s Kingdoms To Hovel is a great opening to 2022 where we see a band provide us with power and strength that January may sometimes lack in metal releases. The songwriting and band performance in total paints a picture of a band that’s rather tight knit and understand cleanly and clearly how to craft music that is simultaneously ruthless and organised.