The Scottish slamming brutal death metal outfit Party Cannon have been creating annihilating slam and ruining death metal flyers with their colourful and readable logo for years. Having thrown inflatables across venues all over the globe and 4 years since the bands last release, “Perverse Party Platter” the 5 piece are now delivering the next chapter in the ever growing cult of party slam with their second full length titled Volumes of Vomit, which asks the question will the Scots replace Flavor Aid the historic drink of choice with cult leaders worldwide with the Scottish favourite Irn Bru and if so what will they be putting in?

Now if we are talking Volumes of Vomit what Party Cannon are putting in is an absolute monster display of slamming goodness which will have every fan of the band old and new walking in a very slow circle pretending to be on the tools in no time. Just like any Party Cannon release the band ensures their sense of humour is found throughout. 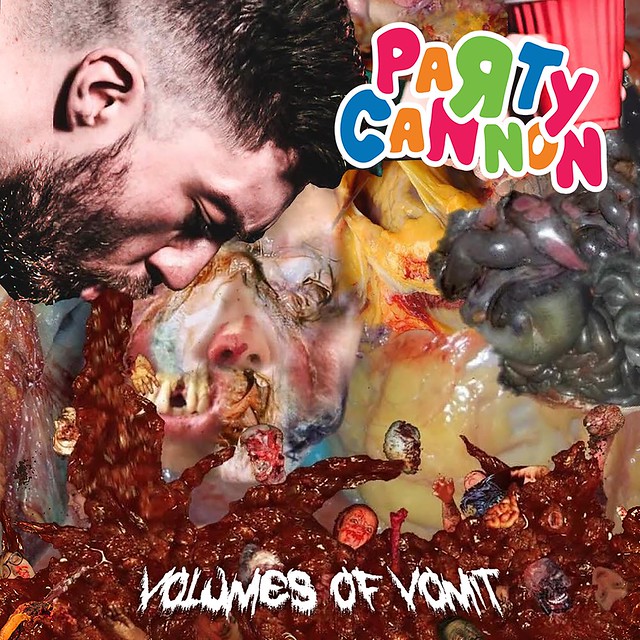 However fun and carefree they may appear to anyone unfamiliar with them, Party Cannon are a very serious band when it comes to how they create and craft their songs. No matter if it’s one of Volume of Vomits shorter more grindy tracks like “Naked Beach Frenzy'' or one of the 6 minute plus epics such as “I believe in Dani Filth” (which also has the greatest music video ever attributed to it, and whoever’s idea it was is an utter marketing genius). Each one of the band's 9 offerings is a display of monstrous death metal carnage, full of punishing thick meaty riffs, filthy farm yard sounding guttural vocals and precision punchy drumming which will batter your brain almost as much as the snare on this album.

So let’s go back and refresh on what Volumes of Vomit brings to the table for all the death metal fans.

Throw all that together and Party Cannon have provided a record which will kick start 2022 in the highest possible fashion and set a high bar for all death metal releases which are following it.