There are occasions when you receive an album to review that turns out to be the most delightful curveball. Such was the case with ‘IV’, the latest album from Greek progressive psychedelic outfit Naxatras. With a new member welcomed on board in the shape of Pantelis Kargas on keys and synthesizers, their fourth release proved to be a wonderfully eclectic journey.

What makes ‘IV’ such an enjoyable listening experience is the way in which each song takes on its own identity. There’s nothing formulaic about the record, with the driving space rock feel on tracks such as ‘Omega Madness’ contrasting with more delicate and gentle pieces as the album progresses. There is an element of jam-based meanderings in Naxtras’s approach, with swirling keyboards complimenting the fluid and expansive work of guitarist John Delias.

There are many different influences that emerge as you delve deeper into this album. From Steven Wilson to Pink Floyd, Hawkwind to Ozric Tentacles, the musicianship is spectacular. The band focus on instrumental exploration for several tracks, with first single ‘Journey to Narahmon’ one of a number of lengthy (six-minute plus) songs the first to really introduce vocals, with Eva Seitanidou delivering a fine performance. You wouldn’t think there were vocals after the first couple of minutes, as the band lock in tight and embark on a three-minute freestyle breakout but eventually Seitanidou bring her haunting melodies into play with great effect. 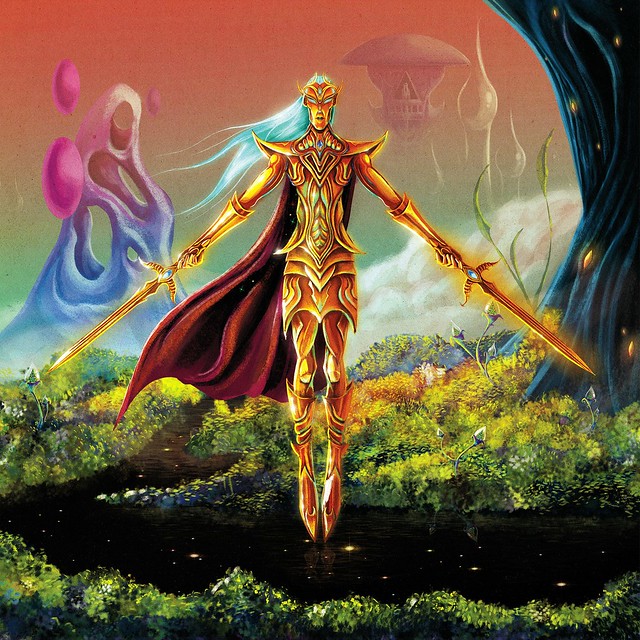 Pinning the whole thing together is the rock-solid bass of John Vagenas and Kostas Charizanis’s powerful but relaxed drumming. Their pairing is almost telepathic, and it provides a suitably robust platform for Delias and Kargas’s more flamboyant adventures.

When the vocals do arrive, Delias’ rich and warming voice on ‘The Answer’ proves to be perfect for the vibe of the track. Gentle in the manner of bands like The Pineapple Thief, the track slowly unwinds into a beautiful, relaxed workout which highlights the vocalist’s stunning guitar playing. It’s a similar feel for the middle section of the album, with the shorter ‘Ride with Time’ and ‘Radiant Stars’ both laid back, the latter with a generous funk beat that switches the tempo and allows Kargas to release his inner Wakeman, duelling with Delias in superb fashion. This really is music to sit back and enjoy, allowing it to wash over you whilst at the same time absorbing the quality on display.

There’s plenty of atmosphere to be had on some of the longer tracks on the album, with ‘Horizons’ the pick but that’s almost like selecting your favourite child as there isn’t a duff track on this album. The more you immerse yourself in this release the more enjoyable it becomes. And suddenly you arrive at the finale, the Western feel of ‘Shape of the Evening’ and there is only one thing left to do. Press play again and enjoy