Three albums to the good, French trio Lizzard’s fourth release, ‘Eroded’, looks set to build on the well laid foundations which have seen the band open for Gojira, The Pineapple Thief, Soen, High on Fire and the Adrian Belew Power Trio. Their brand of solid hard rock combined with metallic elements blends contemporary approaches with a retrospective sound. The result makes it easy to see why Lizzard have fitted well on the bill of such varied artists. 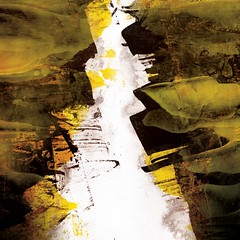 Mathieu Ricou’s clean vocals and sharp guitar playing are supported by the drums of Katy Elwell and bassist William Knox. The trio lock in tightly with 11 tracks that vary in style and delivery. The powerful full opener ‘Corrosive’ and the frantic ‘Flood’, both benefit from hard-edged riffs, the songs never outstaying their welcome.

It’s often easy to put a label on a band, thus consigning them to one style of music. That isn’t the case with Lizzard. There’s a huge variety of influences caught within the mix and that’s what makes them such an interesting and original band. In the first five minutes I caught flashes of Mastodon, Gojira, Muse and Opeth. It’s a heady mix alright.

‘Eroded’ is intelligent, well-paced and not overindulgent. Elwell doesn’t go for the spectacular, ensuring that the band is solidly anchored and driven. She locks in with the pumping bass tones of Knox, who provides semi-rhythm guitar support at times. Clearly unafraid to mix styles, Lizzard draw deep into the progressive well for further inspiration. ‘The Decline’ with its Foo Fighters style riff shimmers deliciously, the delicate passages allowing Ricou to once more shine with some lovely singing and jangling guitar work.

‘Eroded’ is an album that will appeal to a wide range of music lovers. Maybe not the extreme metallers, but for those wishing to broaden their musical tastes, Lizzard should rightly be on the menu.