Swedish metal band Hammerfall were formed in 1993 by guitarist Oscar Dronjak, who was joined in 1996 by vocalist and fellow bandleader Joacim Cans. The band have forged a deserved reputation as one of the biggest metal bands in Europe, with their fiery combination of traditional heavy metal and power metal. They are a band I’ve seen a couple of times live but have rarely paid any attention to on record. One play of the opening track, ‘Brotherhood’ and I understood why I’d enjoyed them live without feeling the need to dive too deep.

‘Hammer of Dawn’ is their 12th album, and its full of typically muscular, fast paced well performed metal. ‘Brotherhood’ kicks things off, a fast and furious track which echoes the deep friendship of the two bandleaders as well as giving a big high five to their legions of fans. The title track follows, a more challenging but anthemic song that allows Cans to open the full range whilst the introduction of choral elements as well as some blistering solo work from Pontus Norgren.

Thematically, this is the music of power metal. Harmonies on choruses abound, the soaring vocals and melodies pushing along, with Cans demonstrating his versatile range which works so well in this genre. The lyrics talk of the Norse gods, the songs ramping up the intensity. Tales of battles, of swords and magic are all present and correct and to be fair, what else would you want from such a band.

It's easy to see why Hammerfall can command huge audiences in parts of Europe and yet remain relatively unheard of in the UK. Power metal is a poor person’s music in UK metal, albeit that the likes of Sabaton and Helloween are once more making a concerted effort with some bigger capacity venues. If anything, Hammerfall sit much closer to the latter than their army loving countrymen. And there is cheese, more cheese than in a Liz Truss anti-EU speech. ‘Reveries’ and ‘Too Old to Die Young’ demand singalongs at full volume, just ignore the rather rudimentary lyrics and you’ll be fine, raising that sword high in the sky. 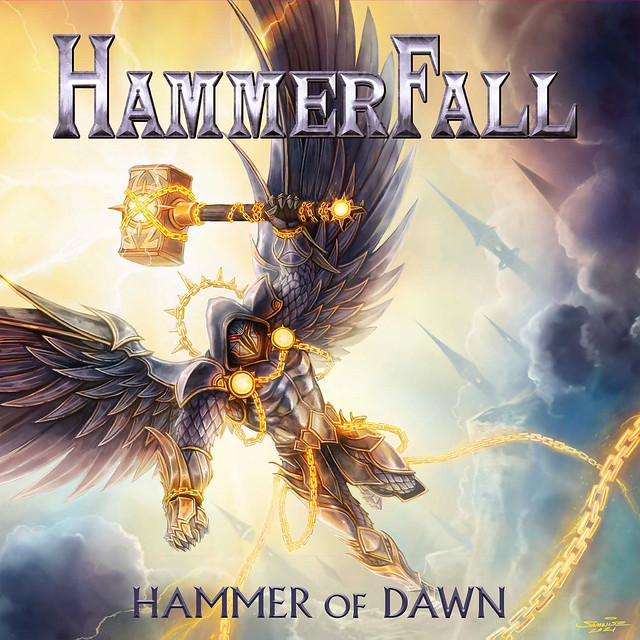 Underneath all the histrionics and posturing, Hammerfall are a fabulously tight band. Even if you dislike this genre of metal, it should be possible to appreciate the quality of musicianship on display. Even the inevitable ballad ‘Not Today’ is well crafted and delivered, although this is a stinker of a song to be fair!

Where Hammerfall is at their best is when they hit their top speed, in the same way that Helloween, Running Wild and Blind Guardian are most enjoyable when rattling along, almost out of control but never quite losing all grip. ‘Live Free or Die’ and the closing song ‘No Mercy are great examples of Hammerfall’s power, with David Wallin’s intensive drumming propelling things along at 100mph. This will be even faster live. Hang on to the seatbelt.

A crisp overall production courtesy of Fredrick Nordström (Arch Enemy, In Flames, Opeth, Powerwolf and others) gives Hammer of Dawn plenty of polish. It’s an album that you can’t help but singalong to after a couple of spins. And that’s what power metal is about – fun and fast paced metal. Hammer of Dawn ticks both those boxes and should feature highly in the power metal charts come the end of 2022.