The Vibrators may not be the first name that springs to mind when you consider the genesis and evolution of the first wave of Punk. But, like many of their more familiar contemporaries, these boys have been around since the start of it all back in 1976. Perhaps not as well-known as The Clash, The Stranglers or the Sex Pistols, but The Vibrators’ influence within the scene spread far and wide.

When looking for a more Punk sounding name, Highway Star frontman, Jake Burns, just happened to glance at the back cover of the 1977 debut record, Pure Mania, and notice, hidden away on side two, a song title he thought would do the job. So were named the Stiff Little Fingers. Similarly, The Exploited took the closing track from the 1978 V2 album and turned it into the title of their sophomore record, Troops of Tomorrow. This was again covered in 2011 by Vader as a bonus track on Welcome to the Morbid Reich.

With this in mind, the good folk at Cherry Red Records have added a new Vibrators collection to their already impressive roster of album clampacks; covering the band’s output for Revolver Records between the years of 1985 and 1990, the collection includes four studio albums and a live recording, alongside detailed liner notes overseen by drummer and founder member John Edwards.

Disc One is the band’s first live album – simply titled Live – and acts as a natural synopsis of The Vibrator’s work to that point. Released in 1986 it features live versions of Automatic Lover, Baby Baby and Troops of Tomorrow among its fourteen tracks. The set is evenly drawn from the releases, with the main focus being on the debut, Pure Mania. While V2 and Alaska 127 are well represented, third album, Guilty from 1982 is curiously overlooked.

The recording is clean and the show sounds like a blast, with The Vibrators being on top form throughout. Built around crunching guitars and a devilish sense of humour, Live is one of the concert recordings that lets you not only experience the show but conjures the smell of beer and the energy as it launches from the band onto the audience and is fed back.

Disc Two takes us back into the studio for Recharged from 1988. Beginning with the laid-back groove of the single String Him Along before taking a dark turn for Hey Little Doll, The Vibrators demonstrate the breadth of their abilities. Across the whole of the album you’ll find the band flexing their creative muscles, whether that be to deliver full on Punk with Too Dumb, Someone Stole My Heart and Tight Black Jeans or channelling their inner-New York Dolls for Rip It Up, Tear It Up, The Vibrators are in blistering form on Recharged.

That’s not to say the band are content to stay in their lane and produce high quality abrasive music; rather they dabble in a little Folk on Hey Nonny No / Picture Of You, the balladic with Every Day I Die A Little and even some good old fashioned Rock & Roll with Go Go Go. There’re even aspects of the Shoegaze on Electricity, rounding out the wide spectrum of sounds on the record. And, just to show The Vibrators have a beating Punk heart, there’s a ferocious live version of Disco In Mosco as a bonus track.

Also released in 1988 comes the Meltdown album, which forms Disc Three of this collection. The band were apparently riding a wave a creativity at this point as rather than coming over as the unused ideas from Recharged, Meltdown takes those stylistic choices and runs with them. The spirit of ’76 is alive and well in tracks like Office Girls, The Other Side of Midnight and Dynamite, and is run through with a hearty dose of Rock N’ Roll for Danger Street. 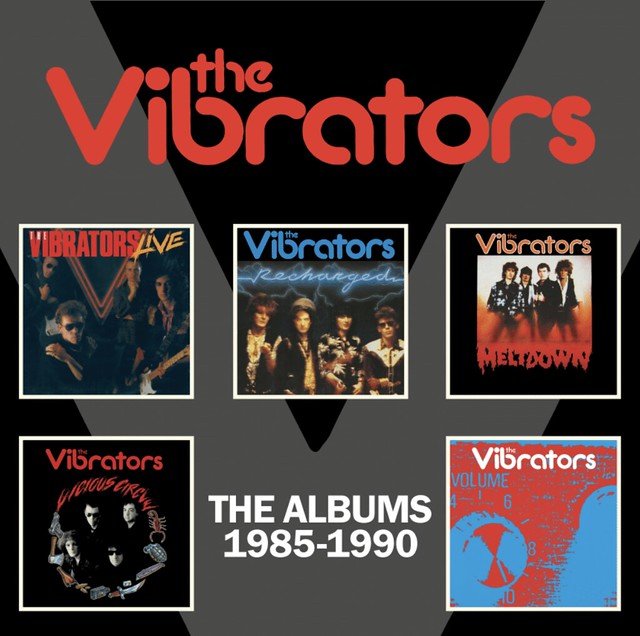 As on Recharged, Meltdown revels in incorporating other ideas into the mix: Rock N’ Roll vibes are never far away and rear their heads on Don’tcha Lean on Me and Let’s Go. Elsewhere, Speedtrap plays with an irresistible swing, Cruel to You is so deceptively simple that you won’t realise you’ve been hooked until it’s too late and the unexpected saxophone accompaniment on So Young only adds to the slow and nostalgic emotion of the song.

Yet the most unexpected moment of the album comes in Letting You Go, when The Vibrators go full Rod Stewart and deliver a song not a million miles away from the feeling and sound of Maggie May.

The production of Meltdown gives the album a much thicker sound and enhances the band’s intention with fuller guitars and crisper drums.

It would be just a year later when Vicious Circle arrived – and Disc Four of this collection – wherein the band maintain the substantial sound of Meltdown and deliver a far more straight-forward Punk album. Count On Me, Ruby’s Got a Heart and No Mercy are all updates on the original Punk sound, dripping with that snotty attitude and anti-establishment fervour that still define the genre to this day. Rocket Ride to Heaven arrives like a bad boy astride a motorbike, while Poll Tax Blues is a heavy, grinding document of the time.

That’s not to say Vicious Circle is in anyway one dimensional or predictable. All the usual Vibrators tropes are on show: the Rock N’ Roll edge of No Getting Over You; the Hard Rock infusion into Slow Death and even the gushing emotion of the single Halfway to Paradise and I Don’t Wanna Fall. This disc even includes the rare B-side of Drive as a bonus extra.

The final disc of this collection comes from 1990 and is fittingly titled Volume Ten. If Vicious Circle was The Vibrators’ most Punk album here, then Volume Ten is the most guitar oriented. And the guitars are right up front here, and in your face as never before. Wonderful World, Cartel, Video Girls, Can’t Have It All and Rain Time are all hearty slabs of six string abuse that leaves Punk behind and enters into Heavy Rock territory.

There’s still plenty for the mohawks to get excited about as the band trade heavy riffs with Punk ‘tude throughout the run-time. Rave On is the hybrid of styles and the powerhouse rock of Hot for You never belies The Vibrators’ affiliations. Hey America and Don’tcha Know Now bathe in the spirit of ’76 and there is a distinct Ramones flavour to Losing It; the band even stray into the post-Punk realms for Out Of My System and there the accessible World in Your Hands in case it’s all getting too intense.

The good people at Cherry Red Records have perfected the art of the boxed set and this five-disc, 63 track clamshell pack is just another example of the mastery of the craft. But product is nothing if the timing is wrong and CRR have managed this release with another Vibrators retrospective reissue of the Demos between 1976 and 1978.

The Vibrators may not have been as commercially successful as some of their contemporaries, but to hear their output from a time when Punk was supposed to have been dead and buried reminds you that there is a rich vein of untapped music needing to be uncovered and explored. So, whatever your taste in honest, guitar-based rock music, you’re sure to find more than a little to bring a smile to your face from this collection.