Imagine this scenario if you will, you alight the greyhound bus in the middle of nowhere, dust kicking up as you trudge towards the plain grey corrugated iron structure in the distance. You get to the compound and the doors are opened, stepping in you immediately catches the smell of incense in the air and a slight sense of dread. As you walk down a long corridor flanked by what appear to be classrooms you glance to your left and right occasionally, to your surprise you glimpse familiar faces… is that Joel Grind from Toxic Holocaust? I swear I just saw Roger Miret from Agnostic Front, that voice! That’s got to be Mike IX Williams of Eyehategod! No way man, Donita Sparks of L7 is here! Roddy Bottum of Faith No More, I love that guy! Genesis P Orridge of Throbbing Gristle and actor Norman Reedus of The Walking Dead, this place is so cool! Suddenly they all turn to face you and in union begin to chant ‘DEFEAT THE NEGATIVE, DEFEAT THE NEGATIVE, DEFEAT THE NEGATIVE’ before you know it you are hopelessly trapped in the cult of Møtivatiøn.

This album absolutely blew me away, from the music to the philosophy behind it via the aesthetics it is as enticing and mind altering as an actual cult. The number and pedigree of people involved, only a few of which I have mentioned already is staggering and each brings their own particular influence and style to the party.

Musically it ranges from huge riff laden grooves to trippy eastern influenced jams, traces of 80s new wave and electronica dip in and out whilst the threat of a crushing doom section lurks around every corner. 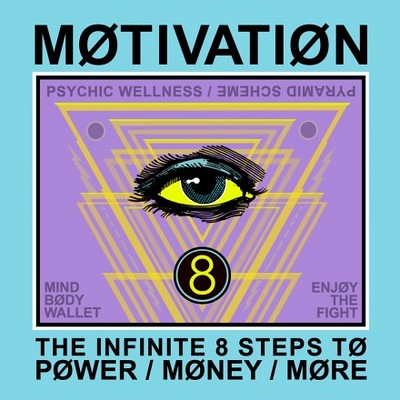 The mix of styles and different musical elements never seem jarring though and blend together to provide a genuinely epic journey, one of transcendence and growth and you feel somehow wiser and more complete following your listen to this album.

Lyrically and vocally various mantras are recited, barked, growled dependant on which superstar is delivering them, whilst the calming smooth voiceover lady provides constant reassurance and advice for ascending to the next level.

If you are a fan of heavy music who also likes to embrace your spiritual side and explore the more esoteric regions of musicality then you will feel like you have truly found a home within the Møtivatiøn cult and from then on you will never want to leave.

I would recommend this album in particular for fans of – Swans, Psychic TV, Big Business, Corrosion of Conformity, and Tool!