Canadian hardcore punk outfit return to the fray with album number seven, their first in four years and the first since the departure of founding guitarist, Scott Middleton. The remaining trio of Liam Cormier on vocals, Mike Peters on drums and Jaye Schwarzer, who pulls double guitar duty by covering both six and four string iterations, do not seem to let this adjustment in personnel bother them too much as they are far more intent on delivering an intense and engrossing album that appears custom-made to brush off those lockdown cobwebs.

Cancer Bats have never been a band of shrinking violets when it comes to the music they create; what they are, however, is quietly wide-ranging in the influences they chose to channel.

Radiate starts proceedings with a definite statement of intent: hard-hitting and abrasive punk attitude mixed with a hearty dose of metallic hardcore and a smattering of the Classic Rock come together to form a future pit favourite. The driving rhythms and breakdowns of The Hoof, alongside Liam’s breathless vocal delivery cannot mask an overt Rob Zombie feel to the track.

There’s plenty of killer grooves to be found on Psychic Jailbreak, with the title track alternating between a skipping upbeat vibe and a more insistent and more ominous focus. While Friday Night and Shadows of Mercury take this two-pronged approach, combining hectic performances with catchy moments and a couple of killer solos. 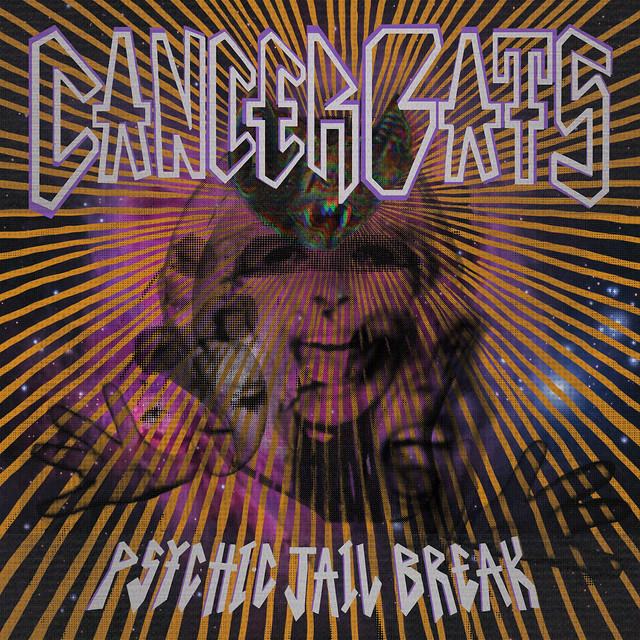 Nestled at the back of the proverbial bus, like three school children looking to make menace, are the most metal tracks on the record. Pressure Mind and Keep on Breathin’ go full on shred with the latter incorporating a healthy dose of southern swing. Rollin Threes is built around an unsettled guitar line that plays out like an anxious heartbeat, throwing the intent of the song into uncanny territory.

Cancer Bats would be doing themselves something of a disservice did they not look to their other iteration: Bat Sabbath. Lonely Bong and Crocodiles supplement their grooves with Sludgecore elements, laying down dirty hybrid riffs that ooze like warm molasses. Central to Psychic Jailbreak is Hammering On, a true son of Sabbath, with its thick guitar sound and sludgy, plodding riff it evokes the cosmic and ethereal while not at all sounding out of place on the record.

There is nothing here that won’t slot comfortably into Cancer Bats’ ferocious live show and with a Canadian tour accompanied the likes of A Wilhelm Scream, Comeback Kid and Misery Signals about to begin, they will be firmly road-tested by the time the band arrive at Temple Newsam for Slam Dunk in about two months’ time. Very much looking forward to that beating.