For decades now, Jungle Rot have been the long-running force that have provided fans with death metal one release after another. Forming way back in 1992 out of Wisconsin, United States, the band got their first Demos out in 1995 before following them up a year later with their debut full length release titled Skin The Living. Since that time the band have been continuously churning out one record after another but in recent years, Jungle Rot have been twisting their formulae somewhat where the production is getting cleaner, it isn’t as dirty and there certainly feels to be a tighter knot on what their songwriting is presenting itself as. Their 2011 record Kill On Command was my first exposure of their sound (and a very early listen to death metal in general back in the day) and it struck me with how ruthless yet sublime it came across as. This was death metal that roared in your face but still knew where it was going and allowed you to reciprocate such a feeling too. Their self-titled 2018 record was a massive success for them and now, four years on, we get to see what the band have crafted now. So, when I saw this record announced I leapt at the first opportunity to review it. This is A Call To Arms.

Listening to this record is a surprising experience. A band like Jungle Rot may conjure ideas of their sound possessing a dirty or muddied aesthetic but the opposite couldn’t be more apparent. The first seconds are effectively a tutorial in the band’s production, where they outline the serene and polished interior of their record, as a guitar riff cleanly and effortlessly glides through the sky. It’s so polished for a death medal record that it’s intoxicating to behold, there are segments herein where listening to this album is akin to watching a thick paintbrush glide across a canvas, or the joy at watching the sunrise over a mountainous crest and sunbeams strike you head on. The buttery quality the production harnesses accentuated the songwriting here, as the band are not going for something that will wreck your senses but something that you can experience easily and with zero discomfort in tow.

The clarity of the guitar work is also a piece of this smooth and polished aesthetic. There’s no chance of our missing anything the riffs may give us because the riffs are presented with such adamant clarity that you’d genuinely need to be hard of hearing to miss what they have to offer us. What’s more, there are tracks contained here that are pretty steadily paced. The band are not always moving at breakneck speeds and the album definitely benefits from doing so, they do attain greater intensity throughout the record and it’s just as effective yet, during the band’s more nuanced sections, that sterner control on their pacing really allows the full potential of the track in question to reach us without anything obstructing it. I think Jungle Rot have reached a point in their career where they don’t always want their audience to be utterly throttled, I believe that’s what made their previous record the massive success it was. I don’t blame the band for wishing to keep up this approach because it legitimately works for them and their songwriting. 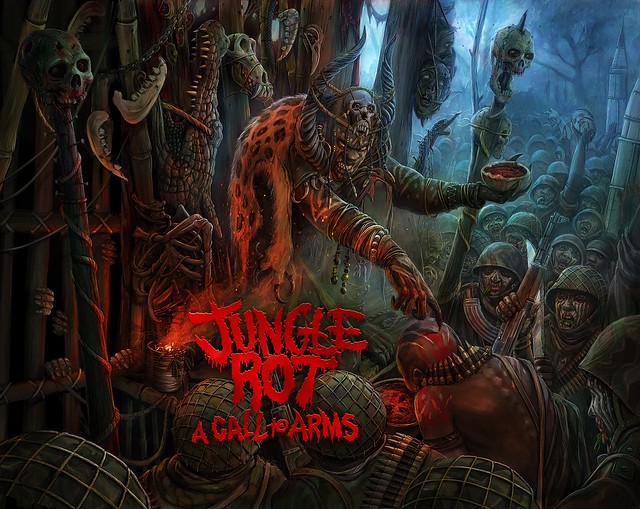 As a result of the band’s choices towards production, I’d argue they made the right choices regarding the drum’s mixing. Now Jungle Rot are a predominantly old school band so their approach to death metal isn’t going to be overtly nightmarish or crushing, it’s going to be straight up and not hide too much from us. In many ways this reflects on the drumming, because as you’ll find we don’t receive any blast beats from them; that isn’t Jungle Rot’s style. Instead, it’s a particularly standard drumming affair the band give us; granted we get double bass drumming and powerful strikes from the Tom-toms but other than that the band aren’t vying for anything really blistering here. They’re very happy for the drums to be the ordinary performance that they’ve crafted them to be, and due to how they’ve been mixed too they work really well with how this record has been put together. The drums don’t seek to burst your eardrums asunder, they’re just doing their job and aren’t trying for anything special, yet since this is the case they’re, if anything, more effective than if the band wished them to rise in our faces. It’s their simplicity that directs our attention toward them.

It’s refreshing from time to time to coherently make out what the vocals are saying. As we’ve touched upon, Jungle Rot are an old school extreme metal band so their vocal prowess isn’t going to give us anything too maddening. No banshee vocals or screeching performance, the band utilise run-of-the-mill death metal growling and yet a delivery that isn’t so hellbent on an evil tone that you’re able to follow what the vocals are saying without needing to strain your hearing. It’s not like every single syllable is easy to make out because the band still need to deliver on their tone and believable performance, if the performance comes off as lacking, the audience will catch onto it easily. So Jungle Rot strike a nice balance between accessibility and death metal persona. The vocals are as smooth as anything else on this record but the band ensured they still had that power to boot as well when it’s necessary.

In conclusion, this album is a great follow up to their previous release. I genuinely hope this string of cleaner and more polished Jungle Rot records carries on into the future because the band are really onto something here, but that doesn’t mean I wouldn’t be opposed to them bringing back their rougher and dirtier sound from time to time. A Call To Arms is a very easy album to experience and I’d argue it’d be a decent gateway record for people looking to get into death metal without too much bearing down on them. Listening to this record is like running your finger along a newly buffed surface and hearing your finger slide along. Then as soon as you’ve started it’s over, because the band make no event to their songwriting. Some tracks here are pretty short and when they end there’s no explosive climax, they just stop. Then the band are cracking on with their next piece. As mentioned, Jungle Rot are onto something here and I’m very excited for their next record. Just as it was with their last record, I can see A Call To Arms being deeply enjoyed by the scores of fans Jungle Rot can proudly boast.