It was initially the sweet album artwork that drew me to Cultic’s upcoming sophomore release, Of Fire And Sorcery. Having formed only in 2017 the band have been doing pretty well for themselves it would appear, releasing a Demo in the same year before soon following it up with 2019’s High Command, their first full length album, to positive acclaim. Now a few years on, Cultic return once more to give us their second record and more importantly, my first experience of their sound. Its been a moment since I reviewed some new death/doom and from the teaser pieces I chose to hear from the upcoming album, I was excited to see what else the album could be hiding. So without further ado let’s take a peek at Of Fire And Sorcery and see what makes this album worth our attention and money.

It’s interesting how this album opens up with an orchestral piece that feels bombastic, whilst at the same time, foreboding. Often when a band goes for this introductory approach it’s to greet their audience with a huge soundscape to suck them in, yet Cultic utilise the grandiose here in the same way ancient civilisations would herald the coming of a god; that encroaching power that can hardly be fathomed. Think any Mayan/Pagan ritual and that’s the aesthetic this record introduces with. There’s a particular emphasis on the brass section with this orchestral piece and it shows in the songwriting too; the death/doom the band champion is the kind that feels heavily reinforced by the bass but doesn’t try and shove it in your face. You can feel the immense weight of this record on your shoulders, yet that mass isn’t present; the crushing might that Cultic demonstrate herein is practically weightless.

Moving on, it’s incredible how absorbing this album feels without it needing to devastate your senses. The first few tracks really surprised me as to how easygoing they were, a lot of death/doom these days can often lay it on their audience in great ways to envelop their senses, increasing immersion. But the weightless feeling this record exudes is surreal, I constantly felt like I should be feeling that weight pressing down on me but the sensation never crossed my being. The songwriting was able to deliver a legitimately heavy death/doom soundscape without punching away at my senses all the time; that’s no small feat because, the band are teaching their audience that they don’t need to be in a certain mood to pop this record on. They can just happily play this record and enjoy, without needing to make some kind of sensory commitment to the music. Riffs and vocals are able to offer us everything we’d want to experience from a Cultic record, which may actually be a breath of fresh air for people who are tired of crushingly heavy soundscapes that irate and beat down on their shoulders. It is odd to listen to when first playing this record, but the more you delve into it the more you’re glad for Cultic making the production choices they did. 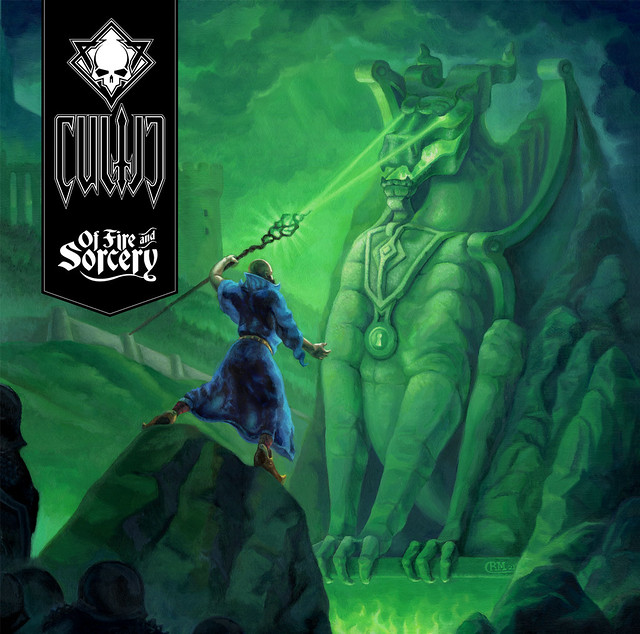 What really turns me on to Cultic more than most Death/doom acts lately however, is the attention to the old school aesthetic. We’ve touched on how the band champion a peculiar form of production that’s given their songwriting and instrumentation a bizarre and floating style, but Cultic’s vibe is one that I’d compare to Cirith Ungol. In the vein that Cirith Ungol have been given a supercharge of bass, evil and muddied clarity. Cultic definitely go towards an old school form of death/doom that really allow their audience to dive further into the record without needing to throw a million atmospheric elements into the mix at the same time. The fact that I was able to recognise the dirty and raw production whilst still able to make out the clear bass lines and guitar riffs and where the band were taking me is an achievement unto itself. Since the band are vying for that older and more straightforward style of songwriting, it really aids them in giving us a sound that isn’t over the top. I think some people may come away from this album thinking it’s too stripped down, because it is pretty down to earth. The band don’t seek out any special formulae or tricks, it’s just good and old fashioned songwriting coupled with their production and mixing, Of Fire And Sorcery is simultaneously one of the easiest and most accessible extreme metal albums I’ve listened to in quite some time.

What grew on me over time was the track structure. That initial orchestral piece you think is merely the album’s introduction, is actually just the first part in a record that is forever moving back and forth between orchestral/ambient pieces and traditional songwriting. I’ve heard bands attempt something like this before where it hasn’t worked but Cultic have cracked it; the atmospheric pieces are short and have enough gravitas on their own to serve as both one track’s epilogue as well as another track’s prologue. You’re constantly being seen off from one track whilst being pumped for the next. But it’s not like that atmospheric capacity is reserved just for the interim tracks, there are plenty of occasions where samples of horns and drums and brass sections will bleed into the rudimentary songwriting heightening not simply the main songs themselves but also the interim tracks too e.g. “Warlock”. By doing so, the band have guaranteed your attention isn’t reserved exclusively for the album’s main songs; every track has its purpose and you’re forever wondering what they’ll do next and how they could implement as the album progresses. This is how you structure this kind of record effectively, without audiences feeling like half the album is simply filler.

But you know that makes this album so damned great? The simplicity. We’ve mentioned previously how the band give us a straightforward approach to songwriting but it’s more than that. Modern death/doom could be argued to have too much going on: too many samples, too many atmospheric elements, too many things happening at once to try and bring the audience into their record when they often achieve the polar opposite. Cultic have applied just enough of the atmospheric element to their record to draw audiences in without leaving them with not enough; it’s a very fine line. Instead of throwing an abundance of atmosphere at the audience, Cultic apply just enough and then allow the production, mixing, songwriting and personal performances to further the album’s aesthetic. What this does is cement the album’s tone in the listener’s mind as one of utter uniformity. You know the album you’ll hear at the start is effectively the album you’ll hear at the end, but you’re perfectly okay with that because the journey between those points is so deliciously slick and grooving. The absolute ease of listening to this record is frightening, a legitimate gateway album for death/doom if I ever heard one. As mentioned beforehand, it’s quite the stripped down album yet Cultic benefit all the more because of that.

In conclusion, what Cultic have pulled off here is incredible. A 50+ minute death/doom album that, at no singular point, dulled or grated on my senses. Since the band put forth such a straightforward and simplified form of songwriting they ensured your listening experience isn’t massively overwhelming, hence the innate ease this record is to put on and play. Cultic demand your attention but it’s not like they’re punching you in the face for it. You crawl to them and crawl for more as opposed to the other way round, the band are in full control. I really want to check out their first album, High Command, from a few years ago now because it isn’t the first time Cultic have utilised this style of production and retro aesthetic for their means. Atmospherically it’s perfect, delivering just enough ambient and orchestral elements without it being overbearing even with the back and forth structure the record displays. It never grows tired due to the aforementioned way the band continuously bring aspects of those interim tracks into the main pieces, establishing the record as a cohesive whole instead of half an album only worth your attention. I have absolutely no issue at all in deeming this an Album Of The Year candidate, Cultic have an incredible album on their hands here and one I cannot recommend enough for you to check out for yourself when it releases come late April, if for just one reason: Effectively applied simplicity.