When you have “touched the face of God” in any field or profession it can mean only one thing: immortality. The burning question is what happens after you have become immortal? All too often musicians embark on cathartic projects to alleviate boredom and exercise creative demons. The trouble is the track record for such projects is not very good. Think Bowie and his Tin Machine, Rob Halford and Fight and Bruce Dickinson and Skunk Works. All necessary for the creative juices to flow, but often the expectation is way in excess of quality output.

Alex Lifeson is an immortal that walks among us. He has teamed up with three other mere-mortals. The rush guitarist is joined by Alfio Annibalini (guitar, keyboards, programming), Andy Curran (bass Guitar, synthesized bass, programming, guitar, backing vocals, stylophone) and Maiah Wynne (lead vocals, backing vocals, keyboards) for the Envy of You project who are about to release a self-titled debut album. This is a largely bohemian, art tinged project. The music is often subdued and quiet with interspersing electronic sounds weaving and blending the traditional instruments together. Drums are often electric. The vocals are, at times, whispered or delicately sung. Alex Lifeson is restricted to 80s Pink Floyd style solo breaks and unusual and ambient guitar noises. The bass seems to have escaped the attention of the other three as this instrument is very prominent. 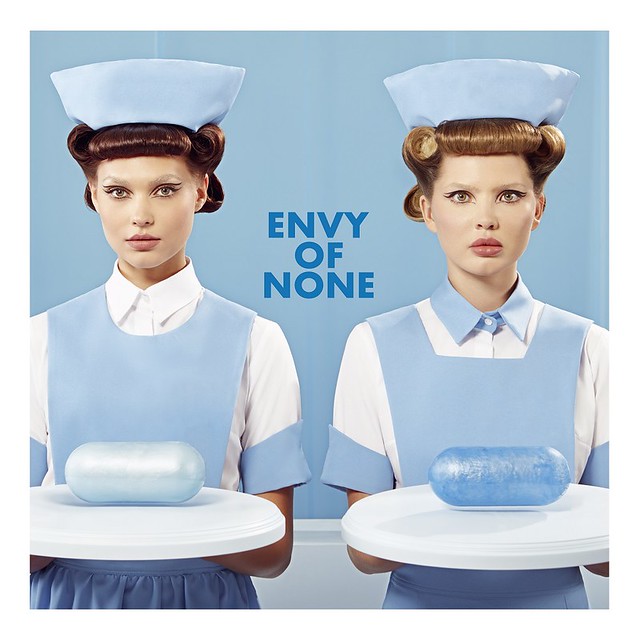 The opening three songs are very subdued. It leaves me wanting to shake the players and tell them to wake up and get on with it. Long introductions and building verses, end up going nowhere. I'm wondering why Alex Lifeson agreed to record this project. They're using him sparingly. It's like having a Ferrari in your garage and walking down the road to get the paper. Just when I'm beginning to lose all hope, the highlight of the album 'Dog's Life' falls smack bang in the middle of the record. The one time during the recording that the band members seem to let go and actually let the music take them to where they should be. The moments of brilliance are few and far between with only 'Enemy' reaching anywhere near the same as 'Dog's Life' and the last track on the album 'Western Sunset'. The latter being a country laced, acoustic guitar instrumental.

That's the trouble with being mortal, you have a fundamental flaw. By design we will always let the immortals down. The other three members of this band can only dream of some things Alex Lifeson has seen and experienced. They will not know what it's like to walk out in front of 100,000 plus people. They will never know what it is to create albums that have been labelled masterpieces. Ultimately this record is disappointing. I'm hoping Alex Lifeson produces a straight-up rock solo record at some point, similar to his Victor Project because, for me, this album falls a little bit short.