Over looked would be far too strong a statement to sum up Atrophy, but I do feel they never got the recognition they deserved back in the late 80s and early 90s. This nineteen track double cd pack aims to celebrate the band’s first two albums, and maybe even introduce them to a new fan base.

Disc one features the debut album 'Socialized Hate', originally released in 1988. 'Chemical Dependency' begins with a quiet sample until the thrash begins. When the thrash gets going, make no mistake this is thrash!. It shreds and chugs along with speed and aggression, the way any classic thrash tune should.

The album has lyrics that revolve around social commentary, rather than satan or the occult. Many of the later wave thrash bands took this option leaving the emerging black metal and death metal scene to writhe around in the supernatural devil-worship world. Atrophy had a political stance that was not necessarily tattooed upon their selves but any timid read through their lyrics will display this point. There are many stand out tracks from this album, one of which for me is 'Preacher Preacher' with lyrics explaining the hypocrisy of the catholic church. The crunchy riff that leads into manic thrashing and screaming is perfect to my ear - massive shredding guitars is the hall mark of this era and this band. The musical breakdown in this track is excellent. Tim Kelly revolves around the drum kit with power and precision, this command of their instruments is mimicked by the rest of band. The silly, maybe adolescent, side of the band is shown in 'Beer Bong' with the names of their favourite beers being called out in the chorus. This is a track that could sit well on any Tankard or Municipal Waste album. 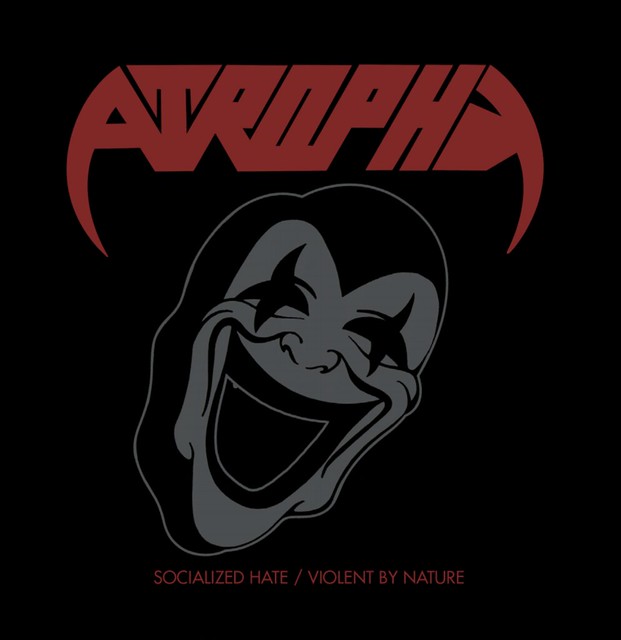 The second of the albums contained here is 'Violent By Nature'. It follows on in the same vain but seems a little sharper in its attack . The album leads with “Puppies are Friends” another political comment, this time concerning the horrors of animal testing. There is a break neck head banging section to this song that can rival any of the so called ‘Big 4’!

Mike Niggl provides a perfect sing-along chorus with the title track, with Jim Gibson’s shredding solo stirring the metal pot even further. The tunes just keep on coming, the musical ability does not dwindle through any of the tracks. 'Slipped Through the Cracks' has an enjoyable bounce in its bones and the thrash riff is a guaranteed circle pit creator.

This second album is the first album I encountered by this band back in the 90s and it was not long before I sought out the first due to my enjoyment of this release. Both albums were companions in my youth and I am extremely glad they are getting a dust off, and re package by the excellent Cherry Red Records.

A band that in my opinion should have made more of a thrash splash back in the day, I expect a lot of thrash fans are well aware of this band and will enjoy the reminisce involved in the listening of these tunes. There will also be some thrash fans who missed Atrophy and will certainly enjoy this classic example of U.S. thrash.