Originally formed in Saudi Arabia by guitar player Hussain Akbar, Sijjeel are a hideous sounding 3 headed death metal machine formed with some additional members from Europe. Teaming up with Comatose Music who need no form of introduction in what they bring to the death metal scene Sijjeel are set to unleash an annihilating death metal listening experience Salvation Within Insanity.

Brutal death metal is not normally well known for its subtlety and Sijjeel continues that fine tradition as Salvation Within Insanity is about as subtle as a baseball bat covered in barbed wire. Filled with a collection of savage visceral riffs courtesy of Hussain which power through each track which screams of powerhouse names like Defeated Sanity and Disgorge (US) with the bass of Lukas Kaminski cutting through to add a combination to really add the brutality along with a almost bouncy punch at points during the tracks. 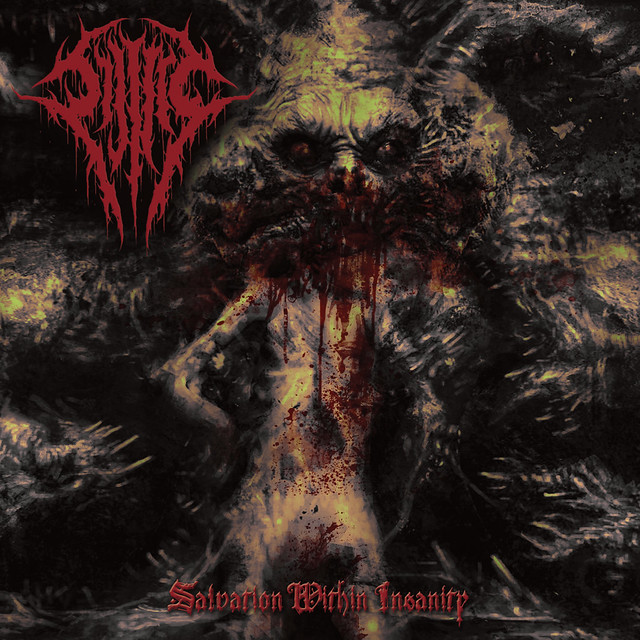 Each song of the 8 tracks featured on Salvation Within Insanity is a maze of frantic song writing bringing the intensity furious and high speed riffs and combing them with ugly sounding slamming sections to give you that change of tempo and direction and keep you on your toes. Drums are programmed, yet the programming is executed about as well as possible. They don’t overpower the other instruments giving everything room to breathe and be heard by the listener. The vocals are handled by Dutch musician and vocalist Floor Van Kuijk who tops off each track with his filthy display of putrid vocals, Floor also handled the mixing of mastering through his studio GLDCHN Studios, in which he continues to show why he is one of the top death metal producers at the moment.

Salvation Within Insanity sounds fresh and full of life, yet does not go completely against the fundamentals of the genre and still remains an ugly sounding record. People will try and hold the programmed drums against the record and use this to play it down, however anyone with half an ear in my opinion should see there is a definitive quality difference between the way Sijjeel has programmed them compared to other acts. An extremely vicious and enjoyable listen throughout.