Kentucky’s finest, Black Stone Cherry, realised the life-long ambition to play London’s iconic Royal Albert Hall during the celebration of their 20th year making music. As a commemoration of the event, the band are issuing Live from The Royal Albert Hall… Y’all both to document the night and as a place holder while they work on new material.

Arriving as a three-disc set, the package includes the whole of the night’s blistering two-hour show across two CDs and in high resolution Blu-Ray format, filmed from on and around the stage and includes talking head interviews from the band, interspersed between the songs.

In one of the finest comments committed to video, frontman Chris Robinson, clearly moved by impending show, simply says: “We’re going to royally rock this mother-fucker this evening. You better believe that.” And, with no time to lose, Black Stone Cherry’s set kicks off with a high energy run-through of Me and Mary Jane and maintains that energy for Burnin’.

It would have been an easy option for the band to load their set with their biggest hits and firmest fan favourites and, for the most part, this is a Black Stone Cherry fan’s dream show. Lonely Train, Blind Man, White Trash Millionaire and Blame it on the Boom Boom are all delivered with Robinson’s familiar gruff phrasing and are received with rapturous applause by the throng. Cheaper to Drink Alone includes a potted history of the formation of the band and the obligatory call and response section; In my Blood features a jamming section that could easily have continued to fill the entire run-time. 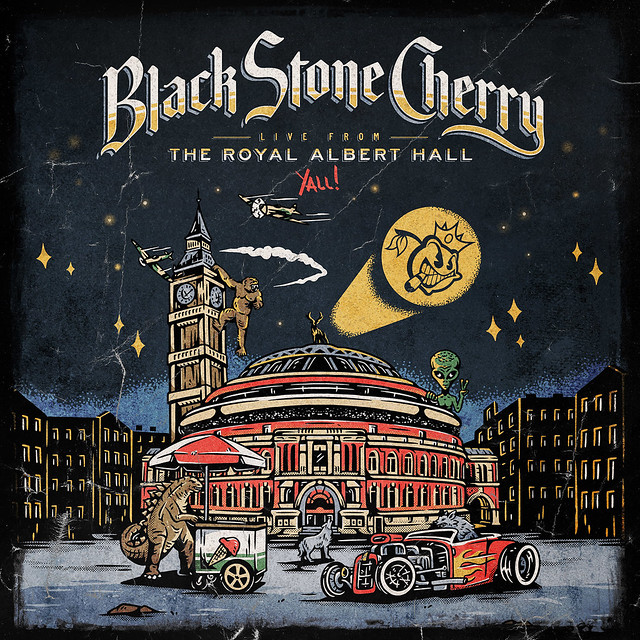 Such is Black Stone Cherry’s widespread and enduring appeal that they can liberally toss in oldies like Hell and High Water, Soulcreek and Devil’s Queen and they will sit among their more recent offerings like the anthemic Ringing In My Head or the lovelorn In Love with the Pain.

Proof, should it be needed, that Black Stone Cherry are timeless in their approach to the art of music. Listening to this album – and understanding that it has been many years since I last saw the band in the flesh – it hits you hard right in the place where Rock n’ Roll lives.

You can’t have an epic rock show full of bangers without the obligatory tear-jerker and Black Stone Cherry wring sobs from the hardest of hearts on Things My Father Said, to the point that it’s clear Chris is fighting back the tears as he delivers the lines. Simple but effective, it reinforces the idea that the band cater for all. The Blu-Ray content shows a visibly moved Robinson as the Royal Albert Hall is lit up by a thousand phones and the audience sings his fatherly tribute back to him.

Live albums rarely ever capture the intensity or passion of the actual event and, if I’m being honest, I can live without drum solos in any environment, but that’s just a minor gripe. As a moment in time, when a group of lads from across the pond realised a dream, then Live at the Royal Albert Hall… Y’all ticks all the boxes and shows a well-tuned musical machine in top gear.

Fans will lap it up and for those not too familiar with the band but with a hankering for some good old fashioned southern fried rock and roll, this is a perfect place to start.