If it seems oddly familiar – a Swedish Power Metal band singing about war – then you’re probably thinking about Sabaton, and you wouldn’t be too far off the mark. For, as Civil War launch their new record, Invaders, and celebrate their tenth anniversary, it should be remembered that the band formed when guitarists Rikard Sundén and Oskar Montelius, drummer Daniel Mullback and keyboard player Daniel Mÿhr, all founding members, left Sabaton. Rather than focus on the European theatre of war, Civil War chose to look across the pond at America’s history of conflict.

Only Mullback and Mÿhr survive from the formation, having recruited guitarists Petrus Granar and Thobbe Englund and vocalist Kelly Sundown Carpenter into the unit, with Granar taking up bass duties for the recording process.

Civil War do not mess about on Invaders and get right into it with Oblivion, complete with esoteric intro, which gives way to Power Metal gallop, filled with bombast and soaring solos. Carpenter’s vocals take is something of the Dickinson in this apocalyptic tale, supplemented by massed choral voices leading into the guitar solo.

As Civil War know their craft and know how to mould a Power Metal anthem you sort of get the idea of what Invaders is about. The guitars produce riff after crunchy riff and solo after stirring solo; keyboards sweep across the compositions, adding a level of grandeur to the proceedings while the rhythm section lock in and lay a foundation for the band. Carpenter’s first full length outing sees him commanding the microphone, demonstrating his considerable vocal range when necessary and holding back in obeyance when not. 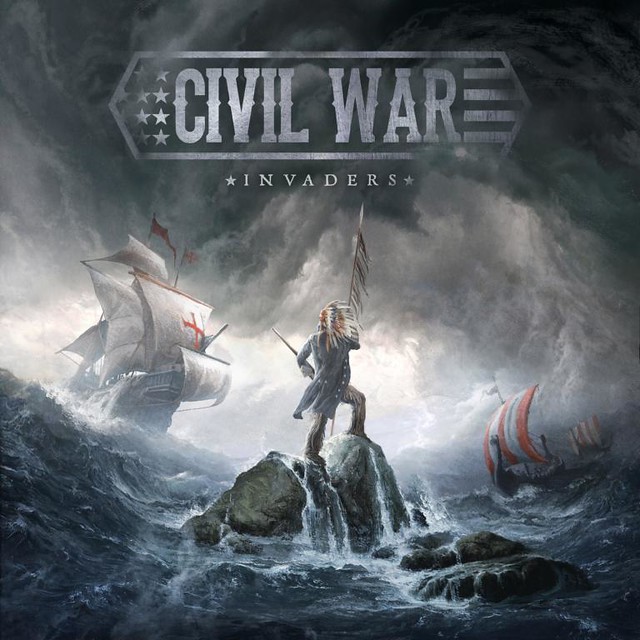 The band have enough miles on their clock and are skilled enough to take their signature sound and tease out the ideas to their maximum effectiveness. They allow the subject matter to dictate the song, utilising African rhythms on Heart of Darkness, Civil War’s take on Conrad’s novella of the same name; the off-kilter, vaguely uncanny, progression of Slaughterhouse-Five is reminiscent of Vonnegut’s narrative structure as the band seem to throw everything at the tale of Billy Pilgrim coming unstuck in time.

Familiarity with these texts is not required to enjoy Invaders as there is plenty of good old fashion Power Metal swagger to savour. Dead Man’s Glory – originally released back in 2019 as Carpenter’s introduction to the band – incorporates a maritime undercurrent into the track; Carry On, Soldiers and Kings and Battle For Life revel in the excesses of the genre, whereas Invaders and Warrior Soul ratchet it all up to eleven, including the gallop and the bombast, and filtering through a Helloween sensibility.

I don’t think it’s possible to consider a heavy metal take on American history without mentioning Iced Earth and Andersonville is a lyric concerned with the capture of a Union soldier and his incarceration at the titular prisoner of war camp in 1864. Borrowing Jon Schaffer’s ability to craft an emotive story in the form of an epic, widescreen ballad, Civil War wring every possible drop from the track.

As a bonus for the tenth anniversary, the band have re-recorded Custer’s Last Stand as additional content.

Invaders shows Civil War to be a band without any need to be compared to what their former iteration may be doing. Whichever way you look at it, Invaders is a fine example of a modern version of an old school Heavy Metal record.