Album three from the Sheffield wrecking crew is a deliberate attempt to push the band’s sound even further. Anyone familiar with the Malevolence’s first couple of albums and the 2020 EP will know how dangerous the band can be and that was underlined during their show-stealing Bloodstock 2021 performance.

Riding so high means Malicious Intent arrives with a huge weight of expectations and, historically, bands have made their reputation on their third albums. No pressure then!

If there is then there isn’t a sign of them as Malevolence seem to have taken all the positive comments and crafted a monster of an album, using elements from Reign of Suffering, Self Supremacy and The Other Side, filtering them through experience and made them even better.

There is an amount of business as usual about Malicious Intent, with Malevolence doing what we love them for. The opening title track jumps straight in, no preamble, no mauling about with twiddley intros, just sheer aggression from the outset. Constructed around punchy riffs and raw vocals, Malicious Intent – the song - is a short, sharp, shocking way to dust off the cobwebs and get the blood flowing again.

Across the whole of the album, Malevolence adapt the sound and ensure every moment of this new record features something a little different than the last. Life Sentence maintains the crunching riffs while mixing up Alex Taylor’s vocal approach and introducing a bit of groove into the proceedings. That groove rears its head again in the hard-hitting, yet slower, Karma. 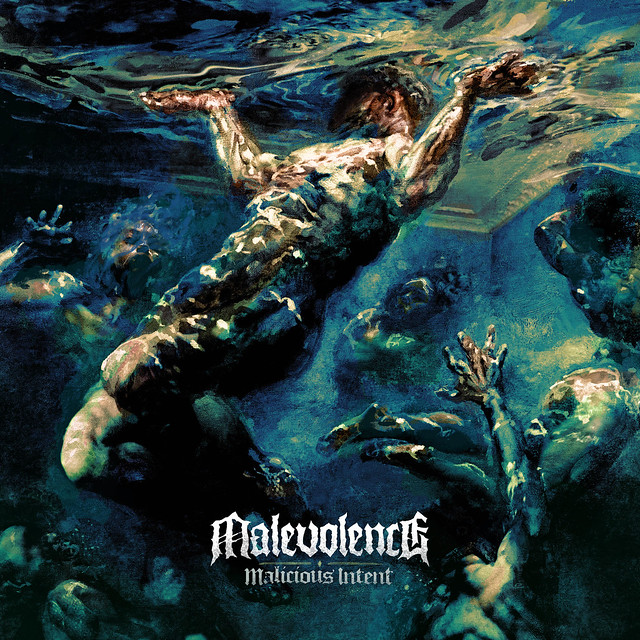 Malevolence have never made any secret of the influence of sludge on their sound and those NOLA vibes can be heard in the opening bars of both Still Waters Run Deep – a track destined to be smashing pits far into the future – and Above All Else, as confrontational a track as you’ll hear on Malicious Intent and featuring Kubla Kahn TX’s vocalist, Matt Honeycutt. Elsewhere, Alex adopts a more wide-ranging use of the sludge-style vocal amid the punchy riffs of Do or Die.

Matt Heafy of Trivium lends his chops to Salvation, while On Broken Glass sees the band following a more traditional, classic rock, direction, though that doesn’t stop mssrs Baines and Hall dropping some frenzied soloing into the piece.

The balladic Higher Place is formed through delicate instrumentation and is evocative of the album’s cover art which shows a body floating in water; and to close, Armageddon blends a heavy riff with bleeding vocals and grinding guitars.

With more than a decade under their belts, Malevolence are tight as a unit. Guitarist Josh Baines and Konan Hall chug, grind and shred as the occasion demands, while drummer, Charlie Thorpe isn’t shy about kicking that bass drum and smashing that snare like a man on a mission and Wilkie Robinson ties it all together.

I recall writing in my Slam Dunk review last summer that Malevolence is my new favourite band. On record they are aggressive and in-your-face, whereas live they are an intensely destructive force. Malicious Intent only goes to enhance that opinion and, with the world finally getting back to normal, the road is clear for some global dominance to begin