Album Review: Made of Teeth – Sociopathogen
Reviewed by Dan Barnes

Happy mixing Noise, Sludge and Punk and whisking it all together with a sprinkle of experimental progressivism, Welsh trio, Made of Teeth, are all set to release album number three on an unsuspecting world. Three years in the making – global events notwithstanding – and Sociopathogen arrives with the early warning of Three4a1er, a raw-throated destructive gallop of a song that accurately sets the scene for the carnage encompassed by this record.

From the opening of first song, Four, it’s clear Made of Teeth are in no mood to be going easy on their listener. The blitzkrieg of the opening bars deliver a pounding attack, with the vocals – reminiscent of Derrek Green’s chanted vocals on latter Sepultura albums – sitting low in the mix. Respite comes in the form of a breakdown, leading to a swinging groove that will lodge itself into your brain and will stay there for weeks. Stutter Bubble continues the musical abuse, and the swing, unashamedly getting the blood pumping while some serious high-hat violence takes place.

Low on Water and Small Operations sit in the sludge territory, built around filthy guitar lines and dirty bass riffs and delivering some of the heaviest tunes you’ll hear, eclipsing many a crew of beardy Sabbath acolytes and their attempts at creating weight. I’d go as far to even say Sociopathogen is one of the heaviest things I’ve heard this side of the last Primitive Man album. 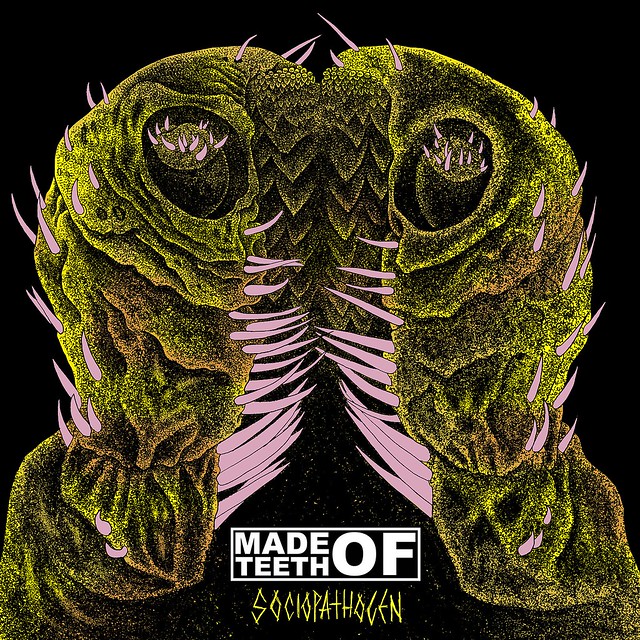 As the album progresses so, too, does Made of Teeth’s creativity. J.T.W. has something of an early Mastodon feel to it and though Never Heard of Them feels quite standard in comparison both take a left-turn and delve into some noodling interludes before returning to the heaviness.

Pick a Pocket, Shotgun Steve and What’s the Time? arrive like a nineties Alternative rock band, with Pick a Pocket featuring some alternative timings early on and a jazzy conclusion; and both Shotgun Steve and What’s the Time? becoming progressively heavier and more intense as they go. Pearly White brings the record to a close with a chaotic meshing of all the elements heard throughout Sociopathogen’s thirty-minute run-time, shot-through with a discordant mixture of noise.

Having shared stages with Today Is the Day, Eyehategod and Big Business over the years, Made of Teeth are no wall-flowers when it comes to musical aggression. Sociopathogen’s three year development may well have honed that rage into the razor-sharp collection of ire-induced, abrasive noise-punk writ-large in the eleven tracks on offer here. Highly recommended looking to vent at the world!