On a calm, warm Tuesday evening, a night of chunky, groovy, ten-ton heavy music awaited just off the Birmingham canal in the downstairs gig room at the Flapper. Local slam quartet Senescent manage to pull a decent crowd for midweek at 7pm, making for a brutal start to the night. A few of their riffs definitely seem to contort the faces of those near the front, or see a few necks whipping up and down. The guitar playing is excellent, with pick scrapes, tapping and bending the strings behind the nut. Though a couple of moments in the set are not water-tight, their use of silence to create space in some of the grooves is hugely effective. Senescent don’t take themselves too seriously, making the crowd acquainted with their mascot, named ‘Mr Pickleback’, and the vocalist smirks as he introduces one of the songs as being about incest. The guitarist and bassist get in the crowd for the last song, as the vocalist’s low gutturals rouse huge cheers. A convincing set and a solid start to the night.

True rising stars of the Midlands metalcore scene, Recall The Remains seem to have a tangible buzz around them at the moment. They have momentum behind them after the pandemic took the wind out of all bands’ sails, and you see more and more of their t-shirts cropping up at gigs. Today was a good example of why. Playing songs from last year’s Dead Dreams as well as a couple of new tracks, their grooves, melodies and songwriting make them stand out from the crowd. Jordan’s bass wizardry and melodic vocals are on point, and Jacob is an outstanding frontman and presence onstage, full of energy and engaging his audience, but really the whole band deserve credit for playing a razor-tight setlist, rehearsed down to the last note. The first moshpit of the night also starts during the final song. With humility, they show appreciation to everyone involved in the evening, but it surely can’t be long before they’re bumped up the bill and playing longer sets later in the night at these sorts of events.

I had absolutely no familiarity with Osiah before tonight, but clearly I’ve been missing out! With blisteringly heavy grooves and blasts, the energy in the room goes up a notch or three for this set. Frontman Ricky effortlessly manages to ignite circle pits on command, while his bandmates headbang and move in sync with one another. With drops in tempo and pitch for mind-blowing brutality, and particularly impressive double-bass fills, it’s a very slick performance from the North Eastern powerhouse. The actual instruments that both guitarists and the bassist perform with are beautiful to look at, even if the music coming out of them is incredibly ugly and heavy. It’s a festive night for the band, as they celebrate the birthday of bass player Carl, grinning as they assure us that his birthday wish is that we buy some of their merch… You’ll see a few more Osiah tops knocking around Birmingham from now if one thing’s for sure. Osiah seem to control the room from the palms of their hands.

Viscera are the night’s main attraction, with their members coming previously from bands such as Martyr Defiled and Abhorrent Decimation - the last time I saw frontman Jamie Graham perform was with Heart of a Coward - though they haven’t been around for long and it’s only their second show in Birmingham. Still, they play like a well-oiled machine, wasting no time in launching into deathcore banger after banger. The lead guitar playing is incredible, with eye-wateringly technical parts performed again and again to add layers to their songs, while Jamie is a real presence at the front of the stage, his throat-shredding scream only seeming to strengthen with experience. The crowd go absolutely wild - more than you’d expect for a Tuesday night - and the moshpits are wide and aggressive, with one unfortunate casualty forced to leave halfway through the set. After a quick reminder to look out for our fellow moshers, Viscera get going again. Deathcore unfortunately gets a bad name by (what seems to be) an increasingly small minority, but to an open listener, this is just as brutal, blast-heavy and blistering as all the big death metal names. How can you push the boundaries of heaviness without a forward-thinking approach, as Viscera do? Also celebrating a birthday in the band today for guitarist Charlie, tonight has been good-spirited, fun and memorable, but above all, absolutely heavy as hell. 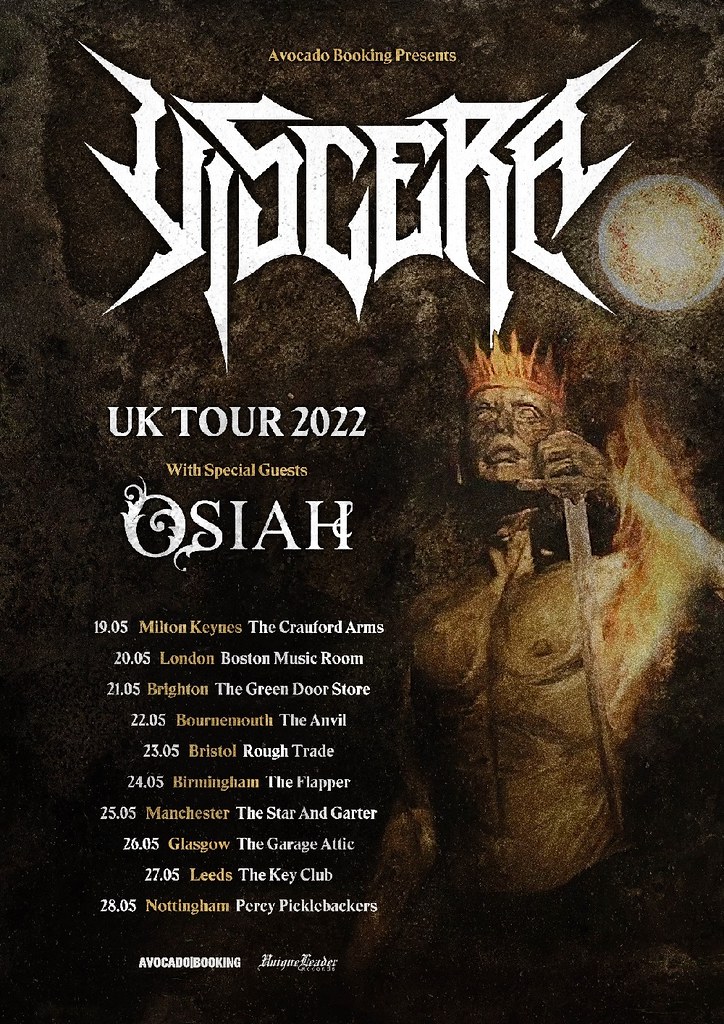