Album Review: Bleed From Within - Shrine
Reviewed by Dan Barnes

It’s fair to say that the adage about it being an ill wind that blows nobody any good was stretched to the max over the past couple of years – global heath emergencies tend to have that kind of effect – but travel restrictions, et al meant that when the festival circuit was plugged back in it afforded otherwise-overlooked UK bands to step up and take those main-stage slots.

The Download Pilot, Bloodstock Open Air and Slam Dunk all saw the likes of Malevolence, While She Sleeps and Wargasm treading boards in front of punters who might not have bothered to check them out in a tent or smaller stage, but who were impressed by the depth of talent in the UK heavy music scene.

While Bleed From Within made it to neither Temple Newsam nor Hatfield, they clearly would have torn Slam Dunk of new one if they had. Such was the ferocity of their Bloodstock show and the (then) sixteen-year’s experience – and let’s not forget, this is the band who, in 2018, were informed at short-notice they would be following Suicidal Tendencies on stage – that the Glaswegian crew are sure to have added more cement to their reputation.

Since their formation in 2005, Bleed From Within have steadily been plugging away, learning their trade through three EPs and five full length releases, with the four year gap between Death Walk and Era being akin to their very own Chinese Democracy.

But Jubilee weekend sees the release of album number six: Shrine, on which the quintet have not only further enhanced what we all already know – that they are a dangerous musical beast – but also that they have creativity by the boat-load and aren’t afraid to use it. 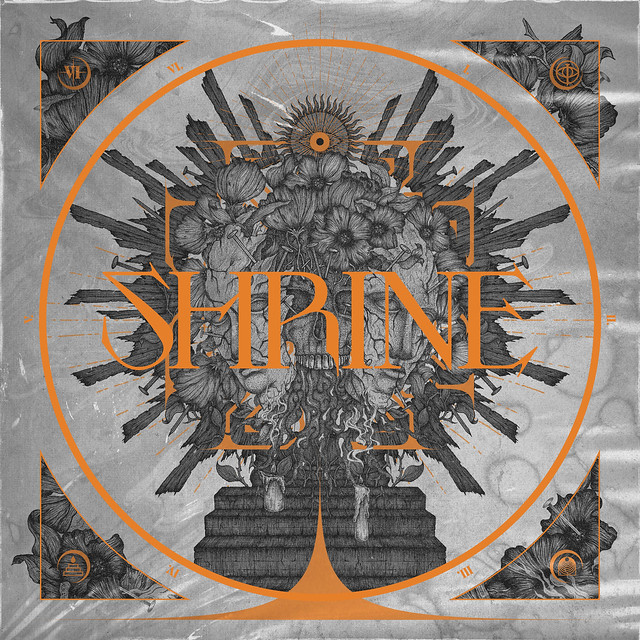 I am Damnation and Invisible Enemy are built around a distinctly Nu Metal bounce which, combined with their massive choruses and fat slabs of guitar chug, serve up a real treat. I Am Damnation even makes a nod to a Power Metal influence which is further explored in Levitate’s epic chorus.

In spite of its inspiration, Levitate, along with Sovereign, Stand Down and Shapeshifter are Bleed From Within playing what they know. Filled with ferocious charging riffs and an omnipresent kickdrum they are the product of a band in complete control of their art and are destined to be filling pits over the next few years.

Even during those classic Bleed From Within tracks you’ll find refinement; Death Defined and Temple of Lunacy are probably the most abrasive songs on offer, yet they aren’t afraid to demonstrate a vulnerable side.

Scott’s vocals are raw and gritty where necessary, Ali and Davie lock it all in tight and let Craig and Steven lay down those meaty chugs and noodling solos.

What is probably less expected on Shrine is the variation to be uncovered, particularly on the gloriously gothic Paradise or the acoustic interlude of Skye. The biggest surprise comes in the form of Flesh and Stone, which also shows a few gothic tendencies and epic moments and could certainly be filed in the Symphonic Black Metal cabinet.

There is a distinctly Parkway Drive sound underscoring the whole of Shrine – but if you’re going to be inspired by any one you might as well go with the Gold Standard – but it certainly doesn’t detract from the punishing forty-five minutes you spend with Bleed From Within.

With a high re-listen value and so many ideas being explored Shrine is an album that will draw you back time after time. When it does, just give in to the urge and spin it again.