Every time a band brings out a “Greatest Hits” or a careers spanning album like 'XL' it is always going to produce a high level of debate. That song has been excluded? Why is that song on there? My favourite hasn’t been included? And this release from Anthrax is no exception to that, as it will produce endless debates from the die hard fans and those who are recent additions to their massive fanbase.

My own history with the band, begins in late 1988 and as a teenager getting into heavy metal, purchasing my first piece of vinyl, and rushing home to eagerly place the shiny black item on my turntable. The first echoes of 'Be All, End All' blasting out from my speakers, hairs on the back of my neck standing up, enthralled and excited by what I was about to listen to, and the rest, for me, is history. A love affair with a band that shows no sign of falling apart. Or does it?

They were my first piece of vinyl, and subsequently, the first band I saw live in July 1989 in Hanley, supported by Kings X, (I lasted about 2 songs in the pit before bailing out) but as I said above, these types of releases will always create discussion points and the biggest disappointment on 'XL' is the lack of songs from the John Bush era. As a massive fan of the band, I know that for various reasons, Bush songs are omitted from the current setlists, but when Anthrax did their livestream events in July 2021, which these recordings are from, they promised an extensive set of hits and deep cuts pulled from their substantial catalogue, so I was genuinely excited about watching it. 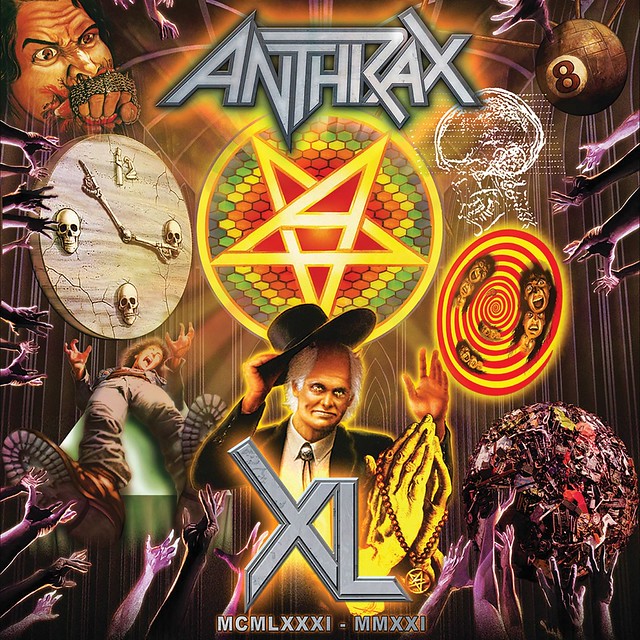 And it was awesome. Let’s not take anything away from the band, as they are still one of the best live acts around and after 40 years on the metal circuit, the two performances were filled with the classic crowd favourites, 'Indians', 'Caught in a Mosh', 'Got the Time', and then the deep cuts, 'Lone Justice', 'Aftershock', 'Protest and Survive' all ably supported with songs from the second Belladonna era, like the sublime 'Blood Eagle Wings', stunning 'Breathing Lightning' and indeed the superb 'Evil Twin'.

It was just missing some of their, in my humble opinion, other truly outstanding tracks, where are 'Only', 'Room for One More', 'Safe Home' or 'What Doesn’t Die'? We do get a guest appearance from the living legend that is Chuck D of Public Enemy, with an awesome rendition of 'Bring The Noise', so not too many complaints really.

But what the fans got to watch live from the Los Angeles soundstage/studio, The Den, and can experience again now is 25 songs that are distinctively Anthrax, with the blood, sweat and tears from a band who after a rocky period in the mid to late 90’s, have truly evolved and are still producing music that will stand the test of time. With their last two studio albums, 'Worship Music' and 'For All Kings', producing some of their greatest songs and lyrical content.

So, has my love affair with Anthrax ended? Hell no! I love this band, and always will, and when I see them in both Bristol and Manchester later this year, I’d happily sit down and have a pint with them before asking, “Why were 'I’m The Man', 'Startin`Up a Posse' and 'N.F.B (Dallabnikufesin)' excluded please? Ha ha!