As the UK media and government officials nudged the UK into a frenzy about a couple of days of above average temperatures, the irony of two bands from the parts of the UK where 16° is considered warm trawling around some of the UK’s sweatiest venues for a week wasn’t lost. But then, this was a tour which demonstrated the old school and the new pretenders to the crown, a battle royale if you like, but all done in a spirit of friendship and support.

It was only a couple of weeks ago I was watching Enforced in the same venue, so I knew that it was going to be warm and that the lighting would be a real challenge for photography. Both proved to be spot on, with the red and yellow lighting combined with an enthusiastic mosh pit making shooting of Gama Bomb in particular a real challenge.

Bristol based Voluntas have been treading the boards for a few years, but the M2TM alumni are nothing if not tenacious. Offered the slot to open they grasped it with both hands, only for new singer Harry Smithson to contract Covid the day before. Undeterred, the four other members did the right thing and ripped through a 25-minute instrumental setlist. Guitarists Rob Innell and K-lum Schmitt alongside new bassist Luke Bennett (who can really give the low end some beef) and sweltering drummer Alex Bennett are moving towards a more death metal tone, unsurprising given Smithson’s other band, Embodiment are one of the leading exponents of death metal in the locale, but they know how to thrash and have a bit of fun at the same time. It may not have been how they envisaged it, but they earnt full marks for effort, energy, and passion. 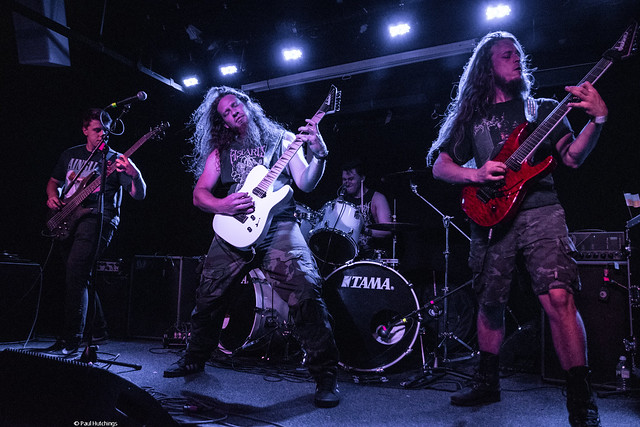 Few bands have created such a storm of interest in recent years as Scotland’s one-man project Hellripper. James McBrain has been steadily putting out his blackened speed metal for the past six years, and the second album ‘The Affairs of the Poisons’ really grabbed the metal world by the scruff of the neck. Having missed Hellripper at both Damnation and Incineration Fest, this was a huge draw, and the Scots didn’t disappoint with a ferocious and intense set that was low on chat but big on fast-paced, dirty riffage. McBrain is unassuming, preferring to let the music do the talking, alongside his three colleagues. Pits opened from the start, the temperature in the room accelerated and the eight song setlist flew by. It was evident by the shirt sales that Hellripper commanded a large percentage of the audience, and by the time ‘All Hail the Goat’ was ripping around the room, Hellripper had confirmed that live they are a force to be reckoned with. Whether the blackened thrash can move the band away from the niche market it currently occupies is debatable, but for now, enjoy the ride and catch this band at every opportunity, for they are that good. 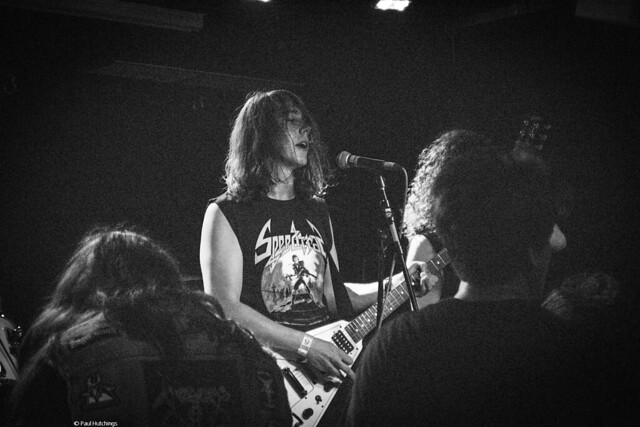 Twenty years since a group of likely Northern Irish lads gathered in Newry to drink beer and play a bit of thrash metal, Gama Bomb are now one of the most established thrash bands in the UK. Seven albums under their belt provides a good range of options for a setlist, and Gama Bomb took the opportunity to spread their songs from across the various albums. Always up for a laugh, and with terrific humour an essential part of their set, Gama Bomb are also bloody great musicians and bring the thrash with as much edge as any of their contemporaries. Led by the always entertaining Philly Byrne, Gama Bomb knew that they had to up their game to match their tour buddies. This they did with aplomb, in a frenetic and wild set that saw tracks played from just about every album. Opening with ‘Sea Savage’ from their 2021 album of the same name, this was Gama Bomb at their best. Mosh pits were instantaneous, the thrash frenetic and the humour right up there.

Dragging a young fan up on stage to declare that “Eddie Munson is in the house” got a good laugh, as did the arrival of Snowy, the Gamabominable Snowman, who was his usual irrepressible self. But don’t be fooled that this is a comedic band. Despite their camaraderie and good time attitude, Gama Bomb can play top level thrash. Bolstered by the barrage unleashed by Shrapnel drummer Chris Williams, this was 80 minutes of full-blooded metal, and by the time everyone left Rough Trade, hot, sweaty and thoroughly entertained, the old guard had demonstrated that they aren’t ready to give anything up just yet. 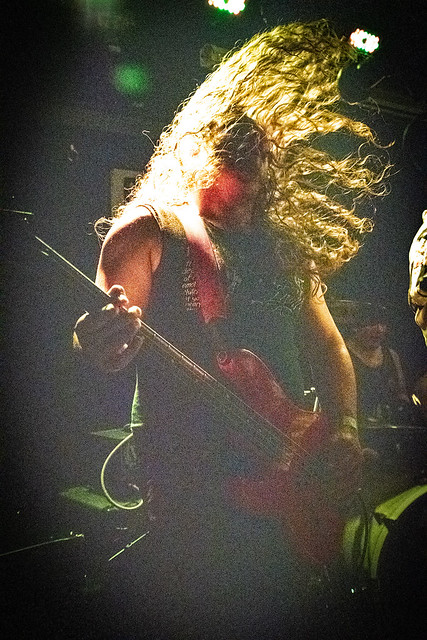 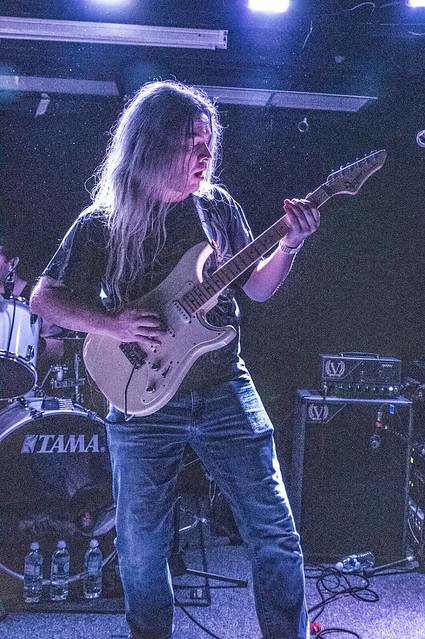