Straight out of the box, a windswept landscape makes way for the riffing wizardry of Michael Amott. His fast paced technical style leaving the listening of ‘Deceivers’, the new Arch Enemy opus, in no doubt of what is to come.

At this stage in their career the band should need no introduction, they are just a handful of years away from their 30th anniversary and 2022 sees the band release album number eleven, the aforementioned ‘Deceivers’ via Century Media Records.

That opening salvo, the first foray onto the album, is the start of something special in ‘Handshake With Hell’. Amott's riffs fluctuate between an onslaught of speed and a more melodic tone, as does Alissa White-Gluz vocals, from the death metal growls through to the almost angelic, the range is limitless. 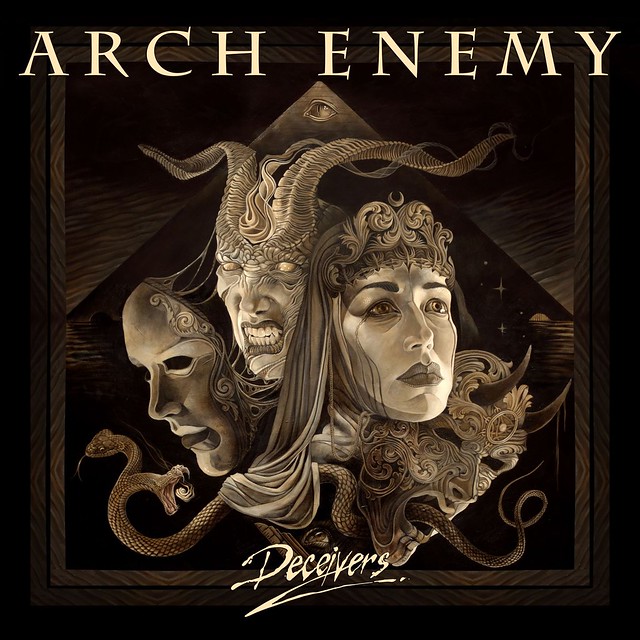 As the album moves on ‘Deciever, Deciever’, from which the album takes its title, is a battering ram of death metal carnage, gone is any hint of melody that the album opener may have suggested. Daniel Erlandsson’s pummelling wall of beats and a heavier all round tone drags the album into a darker place.

The album see’s the band expand their sound, pushing the boundaries like never before. ‘In The Eye of the Storm’ feels almost cinematic, a huge sound emanates alongside White-Gluz’s commanding voice. It has an anthemic quality to it too, which conjures images of fists pumping in unison as the band take this onto the road.

The band have come a long way from ‘Black Earth’ and ‘Stigmata’ back in the late 90’s. Twenty seven years on their sound continues to develop, highlighted once more on ‘Deceivers’ with its range of ideas, tones and stylings. As a full package the album is by far the best new Arch Enemy material in a quite a few years, never ones to stand still they deliver the freshest sounding album of the year so far.