Chicago-based Fearsore is really the brain-child of maestro Wiley Wells and Bloedwyrx – Scandinavian for something akin to Blood Evolution – is their second release through Dead Sage and is a compilation of works addressing themes of declining mental health, hope, suicide and other such topics.

With such subject matter under consideration, Fearsore’s experimental take on the Doomy and Industrial feels to be a perfect fit of harsh noise and ambient drones. Opening with Imminent Failure, Bloedwyrx arrives instantly with the kind of unsettling chords of a Gothic cathedral. Soon, the rhythmic pulse of an incessant machine picks up the beat, offering respite only to reset itself, ready to begin its cycle all over again.

Vocals sit low in the mix, as though an after-thought, rising occasionally to the surface as a raw-throated scream as the song reaches its climax.

Waking to Something Dark takes the previous track’s Gothic sensibilities and stirs in a big dollop of the bleak to evoke images of dark, abandoned factories, the like of which became destinations for many a Randonautic seeker (how very 2020!). The slow and gloomy carries with it a Christian Death vibe and includes samples coming in and out of focus as a fledgling dance beat tries to find ground on which to settle, only to end with grinding guitars. 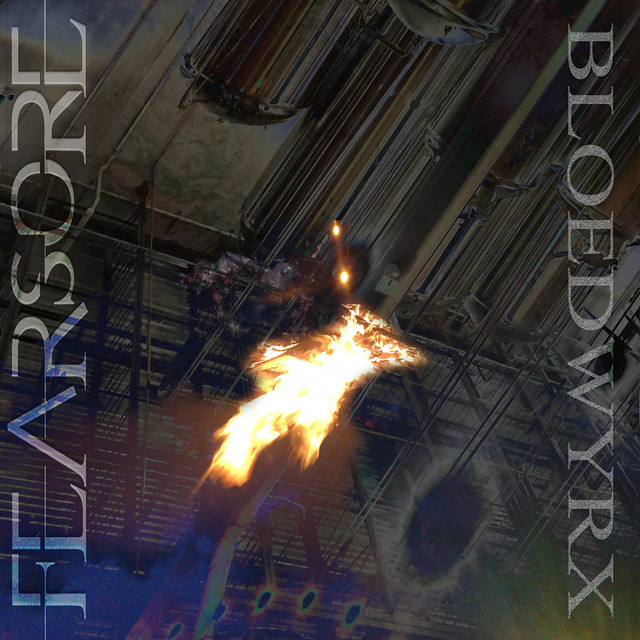 For all its dark and foreboding atmosphere, Bloedwyrx is a real journey of experience. The sinister opening gives way to a more otherworldly mid-section as Sky Devourer Forest Fire Urge somehow combines the grim and industrial with an undeniably cheery beat, giving it an almost Eighties Euro feel.

The sharp lines of Cloudfall up the tempo and the danger aspects, accompanied by a more menacing vocal performance, there appears to be some chance of escape here, with the images of derelict urban landscapes giving way to a green fields and fresh air.

Drone of the Nucleated has a western fell coming from its steel stringed guitar and blowing wind; but an Industrial album cannot end on such a note and, as Bloedwyrx comes to it climax, the spectre of the broken and Modern arrive to dash your fractured hope.

Fearsore’s new record, at only twenty-six minutes, is a feast for the ears and becomes the canvass for wherever the listener’s imagination serves to take them. But the efforts of the creators is such that each time to chose to step foot on this journey, the road and destination will be quite different