I’ve eulogised a lot about the burgeoning British thrash scene in recent times. We’ve seen three excellent compilation albums that have demonstrated the best of the best in the shape of the ‘Moshing the Roof On’ releases, and in recent times there has been several live reviews on these very pages that have included bands at the front of the new wave. Many of those aren’t claiming to reinvent the wheel, but all are bringing a fresh approach and let’s face it, a gutsy riff is a gutsy riff, wherever it originates.

One of those bands who are spearheading the 2022 surge is Imperium. The London quintet are building an impressive momentum which is going to culminate in a maniacal 30 minutes on the New Blood Stage at Bloodstock Open Air in a matter of days from now. Having won through the M2TM London event, and gigged across the country, it's high time that we have something physical to put our grubby mitts on. It’s finally here, in the shape of a four-track EP which features the songs that most of us who have seen the band will already be familiar with. But that’s not a bad thing, it’s more a rite of passage and the band have sensibly pushed this EP to coincide with the Bloodstock gig and their own launch at the Fighting Cocks in Kingston on 6th August.

Probably the most memorable and accessible track is ‘Here Comes the Night’ which kicks open the EP with a size ten boot and a feisty riff that demands you immediately stop what you are doing and look up. By the time the roars of vocalist Ben Porter hit you, it’s time to get on your feet and move that head. A groove-soaked thrasher, ‘Here Comes the Night’ combines the drive of Pantera with the stomp of Anthrax and the guts of Power Trip. It’s a pulsating track, with some blistering lead work from Hardip Sagoo, and surely the band’s anthem. If I’m not in the pit for this at Bloodstock, it’ll only be because I’m dead in a ditch. 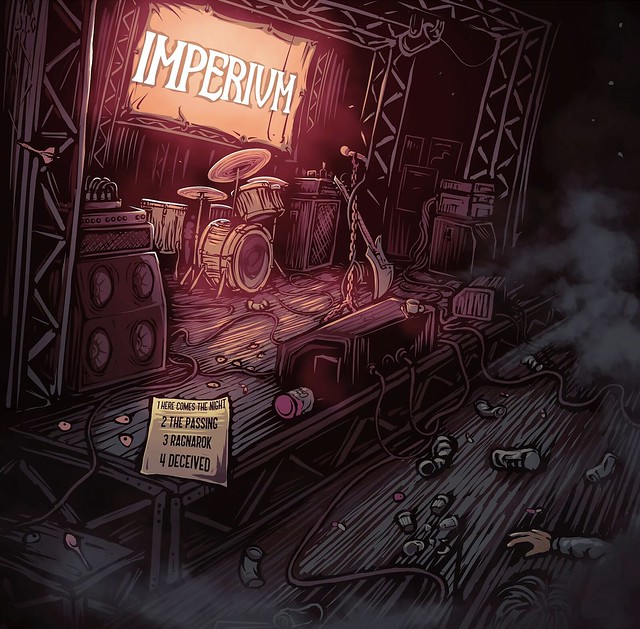 Second up is ‘Ragnarök,’ which is just huge. Its intro summons up all the imagery you’d expect of the song title. The slower, crushing tempo emphasises the magnitude of the song, with the low end held nicely in place. What’s so enjoyable about this track is that it demonstrates a wider and more technical approach to the band’s song writing. It’s clever and proves that intensity can often trump sheer pace. The delicate ending works majestically. That vibe segues neatly into ‘The Passing,’ which at eight -minutes in length is a bit of a monster. Beginning slowly, Imperium capture the atmosphere whilst Porter must really work to keep the vocals level. He does it well, and the song moves along nicely, once again demonstrating that Imperium aren’t afraid of changing style. There’s a hugely progressive feel to ‘The Passing,’ more Metallica circa 1990, and that influence is more in evidence as the song develops. The song that takes the most concentration to follow, it’s also a brave move which pans out neatly, especially when the classic speed metal part kicks in about six-minutes in. If you aren’t nodding along to this one, then you need to get the pulse checked.

That leaves ‘Deceived’ to bring it home and it does it in fine style with a groove that lingers long after the track has finished. It cuts along at a fine pace, Porter’s clean enunciations working hard alongside the central harmonies. There’s an underlying chug that makes this song as infectious as the other tracks, with a hook you could hang your coat on.

Imperium have produced an incredibly solid release, with four tracks that just get under the skin from every angle. With more music to come, the Imperium star is rightly in the ascendency. If you are at Bloodstock, get across and see these guys. Their live show works on a level that recorded music can rarely match. These songs live are phenomenal.