Having now gone on for fifteen years, Acephalix are no longer in that generation of extreme metal bands that are new; they’re now a well established name with various full length works under their belt. Theothanatology, the band’s fourth studio release, comes to us for the second time under the record label giant that is 20 Buck Spin, modern day vanguard of all that is revered quality. As soon as I picked up on how the band were signed onto this specific record label, I knew Acephalix needed to be checked out. The band formed originally in 2007 from California, United States, releasing numerous Demos and an EP before Aporia, their first full length, was unveiled in 2010. Curiously, the band started out with more Crust elements oozing through their sound which only continued on through their 2011 LP: Deathless Master. From then on though, Acephalix underwent a hiatus and wouldn’t be active again until 2015 where they would sport a more refined and streamlined death metal aesthetic without many of the Crust elements surviving into this new era for the band. Their 2017 return, Decreation, also coincided with 20 Buck Spin picking them up. So, let’s see what 20 Buck Spin were thinking on their minds when they decided to include Acephalix amongst their illustrious roster; this is Theothanatology.

The band’s guitar work may have an element of speed to their performance however, there’s no denying that their riffs possess a chunky and defined outline to their sound. The first track alone demonstrates this, songwriting that enables the band’s steadier pacing to really enrich their riffs’ persona and provide their overall soundscape with a punching aesthetic. Other death metal acts lately have provided either ripping or crunching sounds to their riffs, yet Acephalix offer something a little different by providing us with an assault that’s completely rounded out as if into a perfect sphere; a sound that feels like a great weight is yo-yoing onto us, continuously dropped again and again. It isn’t as immersive as other records have been, but the riffs make up for it by crafting a punishing experience for us to bear the brunt of.

I believe the choice of vocal delivery is the perfect option for the sound these guys are looking to exhibit. The general tone of the record, as compounded by the guitar and bass work, is pretty dense. When Acephalix are playing, their sound comes off with this battering, concrete aesthetic where the riffs aren’t bouncing off you as much as they’re being slammed into your torso. The album on the whole presents itself, outright, as a force that won’t morph into anything else than what it was designed to be. As a result, the record only continues to be rigid and clenched tight in its sound; it’s why the vocals seem prevalent and naturally fit into the band’s instrumentation. The gruff and near-monotone performance they give us bizarrely works; you’re not going to receive anything from the vocals that’s experimental or adventurous within Acephalix’s sound. It’s one style throughout the full record, but it works within the confines of what the band have crafted for us here. 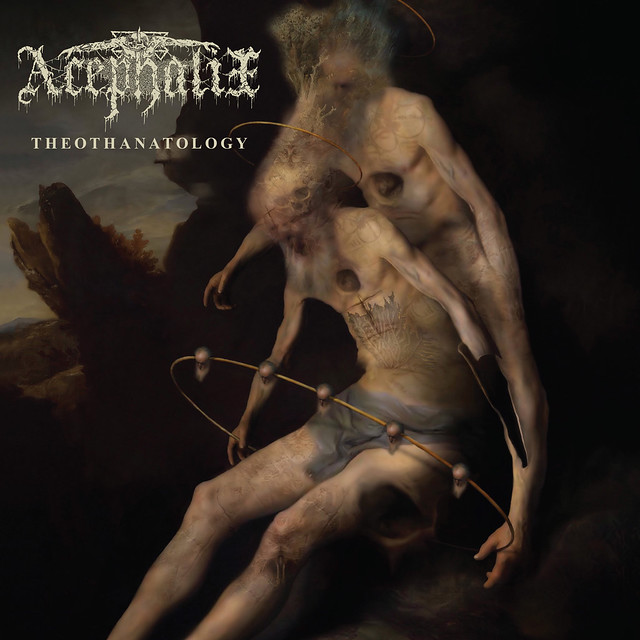 I liked how blast beats were the rarity when it came to the drumming. In a way, it goes hand in hand with how the band approach their songwriting with riffs; the steadier pacing allows the band to breathe more and so, can apply more time on each track to elements of songwriting that not only slow the pace down in our minds but relax the intensity of their sound at the same time. It’s clear that the band don’t want their album to be so intense that the general strength of their songwriting becomes lost within the whirlwind of their assault. The drumming is indicative of this; we’ll receive a general flurry of aggression before the drums relax into a more methodical and conventional pattern where you can still hear the hi-tops and cymbals. The band are here to dish out swathes of aggression but not at the cost of their audience losing their place of where they are.

But what surprised me the further I ventured into this record, after more tracks rolled by me, was how grooving and melodic the music can feel at times. Since the band aren’t vying for all-out assaults on our senses all the time which therefore lets you relax and experience what’s on offer, you’re able to feel the twists and churns their music makes without too many elements overwhelming you. By lessening the intensity of their attack, Acephalix manage to craft a soundscape that is equally aggressive and rhythmic. The solidity their riffs harness enables their sound not to dissipate within the band’s flurry, their impact is resoundingly felt which only stacks as their songwriting progresses. As a result, certain tracks have this naturally grooving vibe to them where their progression feels extremely natural. It’s difficult, when this becomes the case, not to sway your head from side to side.

In conclusion, Acephalix offer a hard hitting and uncompromising sound that refuses to move or mitigate with anything that it comes into contact with. There is no debate on what sound the band are giving you; they sit you down; tie you up and subject you to everything they can muster until you’re pancaked into the earth. It’s this steamrolling aesthetic that propagates this album, where you not only experience the weight their sound carries but the rolling, at times grooving, rhythm. In places, their sound becomes far more natural and doesn’t come off as totally punishing which does come as a relief from an album that otherwise has zero intentions of making life easier for you. As far as album experiences go, Theothanatology doesn’t hold your hand and isn’t here to befriend you. It’s here to kill you for half an hour and leave without elaborating. Fans of more sledgehammer-esque death metal will delight themselves here for Acephalix certainly bring that concrete might in droves with this record.