When it comes to the pantheon of old school death metal bands from the glory years of the late 80’s and early 90’s there is one band that is pretty much universally revered and that is the mighty Autopsy. Formed in 1987 and releasing their classic debut album Severed Survival in 1989, Autopsy took the growing death metal sound and twisted it into more filthy and depraved depths. This continued with genre milestone Mental Funeral in 1991 and the band have continued to release more gruesome and sick albums in the intervening years. After a long period of inactivity Autopsy returned in 2009 and have released a string of solid festering death metal releases but never quite reaching the ghastly heights of the original glory years…until now that is. With their eighth studio album Morbidity Triumphant, Autopsy have an album that evokes the sound and feel of those classic albums such as Severed Survival, Mental Funeral and Acts Of The Unspeakable as it is their most gloriously disgusting album since those days.

Autopsy are one of those death metal bands where you know exactly what you are going to get and Morbidity Triumphant is emphatically Autopsy but it just sounds more grim and nasty than the last few releases with a suitably raw and unpolished production and a very straightforward and no bullshit approach to the songwriting. You get absolutely barbaric and ferocious songs such as Stab The Brain, Born In Blood and Skin By Skin whilst songs such as The Voracious One, Slaughterer of Souls and Your Eyes Will Turn To Dust incorporate that dirty doomy element that has been a core staple of the Autopsy sound since day one. 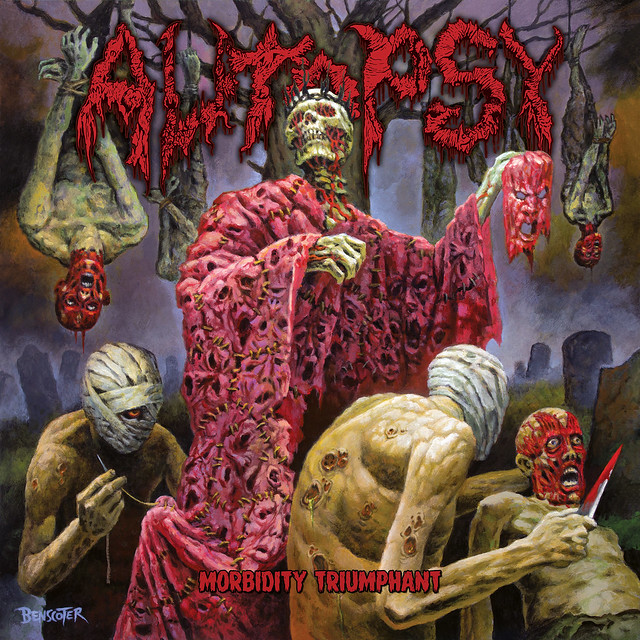 The vocals by Chris Reinhert are suitably barbaric and unrefined just as they have always been and always should be and the riffs are just pure filth with the delicateness of a hatchet to the face and plenty of that sick old school groove.

Morbidity Triumphant is a prime example that death metal works best when it takes the straightforward approach. Though there is always a place for the more technical and progressive styles of death metal the old school sound just hits harder and meets the aesthetics of death metal of sounding as depraved and disgusting as possible. This album is Autopsy firing on all cylinders and one of the best albums they have released in a long time. For straight up old school death metal it’s unlikely you will hear a better example this year. Wonderfully disgusting stuff.