Album Review: ACOD - Fourth Reign Over Opacities And Beyond
Reviewed by Sam Jones

When you have album art designed by none other than Paolo Girardi, you’re going to instantly grab my attention. However, it appears I’m jumping onto the Acod ship pretty late where their discography is concerned. Formed in 2006, out of Marseille, France, Acod are a hybrid of multiple metal forms: a twisted Blackened Death/Thrash act who first took to the metal world through their independently released debut album, Point Zero, in 2009. Since then, the band have dipped in and out of various record labels as following albums such as First Earth Poison, The Maelstrom and The Divine Triumph have seen the light of day. However, it could be Acod finally have more stable footing having signed on to Les Acteurs De l’Ombre Productions for this album possessing the enigmatic title of Fourth Reign Over Opacities And Beyond. Upon a teasing listen I was deeply curious as to what the full length would bring, which brings us here. Let’s delve into this album and piece together what makes Acod such a force in French extreme metal.

I’m a sucker for the juxtaposition in extreme metal of grand classical material right before the nightmare of brutality gets underway. Such is the introduction to this record as the band unveil quite the cinematic opening to their work, where we feel vast brass sections rise and fall with tremulous anticipation. Soon giving way to tribal drumbeats and a serene feminine hum, we can feel the power of this album slowly rising to where we’re expecting it to be. What’s even better is the symphonic element doesn’t simply dissipate as the main album really begins, I was pleasantly surprised to hear it still going on in the background. I haven’t heard too many examples of symphonic aspects coupled with blackened metal, however Acod clearly know how to work it into their songwriting without it coming across as an afterthought or crutch. The power it’s able to imbue into the songwriting, when it’s implemented, is incredible, elevating the band’s performance to new heights. The strength and energy this record possesses practically bursts out of the cover, it’s utterly explosive.

I’ve never been a massive black metal fan, yet there are records that absolutely do it for me. Vocally, Acod have my favourite form of blackened delivery; a sharp and ravenous sounding performance that doesn’t seem to venture too high in its pitch. In some way, I feel like the vocals could actually be followed along pretty easily, even without lyrics to follow along to. The vocal work is prominent and clearly at the forefront of the band’s mix, yet it still knows where it needs to be and is therefore on a level playing field with the riffs and drums. You can feel the rasp and snarl that’s going into his voice, but it never feels overly done for unnecessary effect. In addition, their frontman isn’t performing his vocals too quickly either. As a result, it brings the pacing of this record down a touch whereby we can interpret the songwriting as a whole much more easily. We’re never racing to keep up with the vocals, they’re alongside us at all times and therefore enables us to immerse ourselves all the more in their sound because Acod are actively allowing us the time to do so. 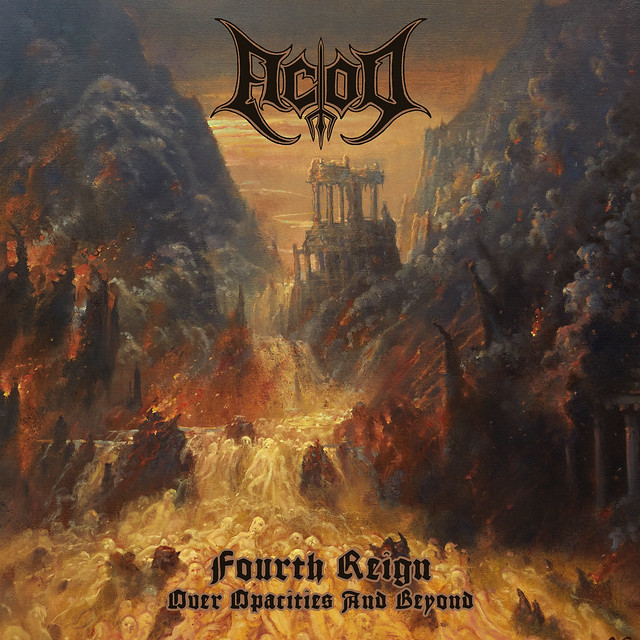 It’s striking just how much content the band are able to stuff within a single song without their songwriting feeling rushed and overly gorged. A single track can have as many as three or four different turns throughout its duration. However, the way the band have coordinated their form of blackened thrash/death metal absolutely works, if anything it’s a true hybrid sound as I couldn’t pinpoint this record as leaning towards one form of metal nor the other. You can’t say that about many death/thrash acts, yet Acod seem to have it down to a fine art. Their guitar work is really varied, you can have steadier segments one moment before the band jump into more rabid onslaughts where they’ll switch it up again with slower, gradual pieces that evoke something ethereal. Seldom do I come across an album that genuinely blows me away with just how much a band is prepared to include in an album, let alone just one song at times.

I think it’s incredible that, in spite of the bristling power and raw, manic energy that’s jumping off this record, I can still clearly hear and feel the bass. Often, you just resign yourself to knowing you aren’t going to hear the bass on such an album with how much you have going on at once. So the fact that I can experience the bass guitar as a legitimate factor within the songwriting and make out how it’s impacting the songwriting on the whole, is an absolute testament to the band’s dedication towards their sound. Riffs can be flying off wall and backdropped against a mass of symphonies, yet I can still hear the bass trundling along and it’s not a small thing either. The basslines have a thick quality to them so they reverb profoundly, as well as give the bass drums an extra dose of strength so they can be felt through every element the band throw at us.

In conclusion, Acod deliver an absolutely extraordinary work of blackened death/thrash metal. I’m stunned by what they’ve managed to do here, there’s so much content to become immersed in its borderline drowning. It’s one of the most enveloping, atmospherically total albums I’ve ever heard. From the first second of this record, the band have you hooked and at no discernible point do they let go. That’s not to say they’re constantly at your throat, there are plenty of moments where the band ease off on the intensity and really allow those calmer periods to settle in. I genuinely believe the symphonic element the band utilised on this record should be seen as one of the gold standards as to how bands of this calibre wish to implement the symphonies within their respective songwriting; the way the band approach the symphonic edge here is downright perfect in my estimation. It’s always there to boost the primary songwriting, not the other way round. It was always far enough in the back of the album so as not to interfere with the rest of the band but was audible enough for it to clearly impact on our experience of the record. You can’t remove the classical element from the blackened death/thrash aspect during this record, the two are inextricably fused at the joint and form the collective crux of what this album is all about. But that’s not to say the general songwriting isn’t deserving praise either; the turns and variety the songwriting continued to offer up even as the album was concluding is amazing; symphonic elements, piano, double bass drums, haunting and ethereal guitar tones, wildly varied pacing. It’s actually frightening how good of an album this is. As far as I’m concerned, this is one of my Album Of The Year contenders. Acod, in my eyes, are the French equivalent of Fleshgod Apocalypse and deliver unto us their Fourth Reign Over Opacities And Beyond; An utterly triumphant, stellar, blackened work of art.