My first Arctangent was one to remember. An incredibly well-organised and efficiently-run event, it was really practical to have the stages so close together, without set times really overlapping. For someone who'd been tempted to go there on the strength of the bill, it was ideal for me. The food choices were lovely and having the arena close to the campsite made for a relaxed festival experience - especially with the option to take your own cans of beer in (a novelty for me!).

The lineup was just ridiculous, too - it seemed they'd booked all the best bands in the wide range of genres and soundscapes that Arctangent offer. After a couple of years of uncertainty surrounding several foreign bands playing in the UK - particularly from over the Atlantic - it's incredibly rewarding to see the likes of Pallbearer, Intronaut and Rivers of Nihil rub shoulders with some of the finest acts the UK (and its underground) have to offer. There were a few bands on here I'd happily travel more miles than usual to go see, so to have several of these on one day was tantalising to say the least during the build up to the weekend.

Overall, an incredibly chilled out atmosphere, full of music lovers in the truest sense, and with the setting of good weather, created an amazing weekend out in the quaint countryside near Bristol. [MN]

First up for me after setting up camp on the Thursday morning is Manchester’s The Hyena Kill. Their set has plenty of fun, upbeat moments, kicking off the day with plenty of energy. The Hyena Kill also bring along a thoughtful atmosphere, with emotive post-hardcore and grunge lurking in their atmospheric alternative rock sound. With real passion and intensity, it feels like a genuinely personal performance from Steven, exploring the darkest depths of the human psyche. Still, well-placed slow and mellow parts allow for ample amounts of breathing space in their music. Their follow-up to last year’s A Disconnect isn’t too far off now - bring it on! The first act of my Arctangent did not disappoint. [MN]

Up next are the captivating Pijn (that’s pronounced ‘pine’, not ‘pigeon’). An introspective, sombre take on post-rock/metal, they hold the audience in a vice grip for their entire set with stunning soundscapes and an incredible command of atmosphere-building. Mostly vocal-free, apart from for a brief passage right at the end (some joke afterward that more time is spent soundchecking than performing vocals), the use of a violin takes up some of the space at the front of their mix. More noteworthy is the fact that that particular player had been drafted into Pijn at the start of that week. Pijn today are really an experience for all in the audience, and playing relatively early on in the weekend pays dividends for them as they become one of the most talked-about performances afterwards. Ironic really, considering how most of the crowd stood watching in stunned silence. [MN] 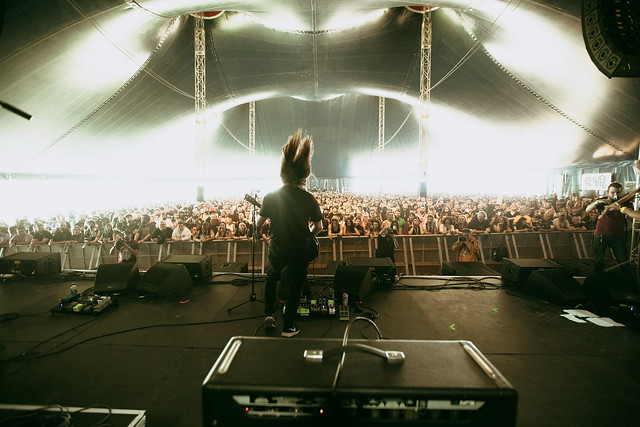 Who could possibly follow such a set but Dvne? The Scottish prog metallers enjoyed a rapid ascendancy over 2021 with the unveiling of the majestic Etemen Ænka, which today’s set exclusively draws from. It seems as if the only complaints about their set are along the lines of ‘why didn’t they play -insert song name-’, while those that are included - such as the towering ‘Towers’ or the monolithic ‘SÌ-XIV’ - completely wow the audience. A festival with the intricate sorts of music found at Arctangent seems ideal for Dvne to gain new fans, and they go down extraordinarily today. I see more and more Dvne t-shirts with each passing season and it’s fully deserved. They’re poised to become cult heroes of the UK scene and god only knows what’s around the corner for them. [MN]

A rare UK appearance from super-proggy metallers Intronaut ignited a completely spellbound audience, lost in their hypnotic prowess for an entire set. A dazzling display of musical masterclass, their intricate guitar lines weaved in and out of each other in front of a razor-sharp rhythm section. Intronaut are a band that simply allow the music do all the talking; as one of the most creative and innovative acts on the scene, you can hear Intronaut’s deep musical passion throughout their set, which is warmly appreciated by the crowd. So trance-like is the spell that Intronaut put you under, that you’d take a set twice as long. Not bad for their first show in two and a half years. [MN]

Post-black metal heroes Alcest really saw the second stage pack itself out. The cult French act enjoyed enthused reactions for fan favourites such as ‘Autre temps’ and ‘Protection’, although the overall feeling in the tent is one of quiet, wondrous appreciation of the beautiful sonic soundscapes they create. It’s as if the band can’t put a note wrong, whether a carefully-chosen guitar melody or a cool, ethereal vocal line, sung with emotion and conviction. Their approach really is the type to make the hairs on the back of your neck stand up, and it just seems to be an amazing treat for all present whenever they perform. [MN]

It’s not so much a music event as a religious experience when it comes to Amenra. The Belgians are well into the veteran stage of their musical journey, having two decades and more under their belt. They are enigmatic, mysterious, and more intense than most of us can even imagine. 2021’s De Dorn rightly brought the band to the focus of many new fans and the main stage tent was showing signs of bursting as the band rendered many incapacitated with a set of extremities. Backed by a black and white video screen, which flickered with imagery about life’s pain, the constant topic of the band’s music. At times ferociously black metal in their outlook, at other times searing post-rock with anguish and angst, Amenra provided the crowd with a spectacle and a heartfelt tug on the emotions. Constantly creative and imaginative, the band’s music is probably more suited to the indoors, but this was a powerful set, leaving those who knew then nodding sagely and those who didn’t looking a bit confused. [PH]

Meanwhile, a visit to one of the smaller stages sees Wigan’s Boss Keloid deliver their live ritual in a tent with a suspicious-smelling cloud effusing from it. Though their intricate, progressive music shows a band who couldn’t understate the importance of their songcrafting, there is no pretension and they don’t take themselves too seriously, as can be seen by frontman Alex Hurst grinning and strutting mischievously around stage centre between powerfully bellowing out his vocal lines. A set mostly taking from last year’s Family the Smiling Thrush, as well as 2018’s ‘Peykruve’ and ‘Chronosiam’, it’s striking how well the tunes stay in your head in spite of their complexity. The melodies are gloriously rich throughout, and their positive lyricism makes for plenty of sing-along moments. The Keloid choir comes out in full force as the set grinds to a halt with a joyous a capella outro to ‘Chronosiam’. It’s incredibly unfortunate to see Boss Keloid clash with Amenra, but those who head here couldn’t leave with regret after the strength of today’s show. [MN]

Thursday night headliners Cult of Luna then go to prove their spot at the top of the bill with a mammoth ninety-minute performance. With the band shrouded in shadow, the night becomes less about the individual musicianship and the sheer force coming from the stage, complemented by a stunning light show and smoke machines that introduce a real sense of mystery. Again, this is a set that locks you in and refuses to release you until the final dying note - you barely notice that so much time has passed, as is the live experience with Cult of Luna. Though their music is harsh and unforgiving on the surface, there’s a deep emotional undercurrent that keeps the listener engaged. It’s this secondary (and arguably most important) aspect that makes Cult of Luna so well-suited to a festival like Arctangent, and deserved headliners. From talking to a few of my friends around the grounds in the two days after, it seems that they’ve converted plenty who knew the name but hadn’t listened to Cult of Luna before. For those uninitiated, they left their surefire mark today. It’s as if the hypnotic power of the music guided the wandering minds in their crowd, tapping into each person’s inner psyche as everyone experienced the performance uniquely. Simply stunning all around. [MN] 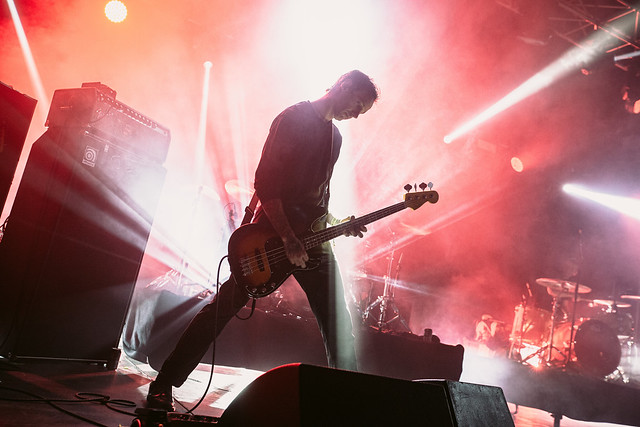