Over 20 years, Dark Forest have followed their own path. Their aim – to create and play the music they enjoy. It’s been a while since I’ve crossed paths with them, but their last two full-length releases, 20916’s ‘Beyond the Veil’ and 2020’s ‘Oak Ash and Thorn’ both sat well with me.

It seems timely to reacquaint myself with the band from the Black Country, and this five track EP demonstrates that after two decades together, they still can write a cracker of a melodic metal song. For the uninitiated, Dark Forest, formed by guitarist Christian Horton, play a traditional style of metal that relies on heavy riffs balanced with flourishing melodic guitar breaks, clean vocals and a solid rhythm section that provides the foundation of the band’s style. Alongside Horton stands vocalist Josh Winnard, second guitarist Patrick Jenkins and drummer Adam Sidaway.

Nestled at the end of four new songs, ‘Ridge and Furrow’ also features a re-recording of ‘Under the Greenwood Tree’, a long-time favourite from 2011’s ‘Dawn of Infinity’. It doesn’t take a genius to work out that Dark Forest’s themes are very much focused on nature, landscape and the relationship between them and man. 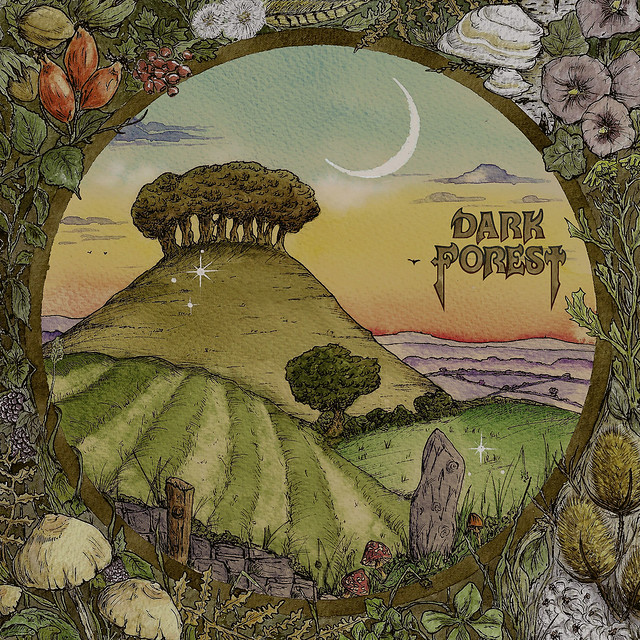 Drawing their musical influences from the great UK metal bands of old, namely Iron Maiden and Judas Priest, Deep Purple and Led Zeppelin, Dark Forest also add an edge of power metal alongside the traditional dual guitar harmonies that light up opening track ‘Skylark’. The longest track on the EP, it’s an immediate reminder of the band’s quality with some stunning interplay and guitar work, whilst Winnard’s vocals hit all the right points. It’s an uplifting and anthemic piece which leads into ‘The Golden Acre’, another track where the Maiden influence is undeniable. It’s another song where you can simply let go, immerse yourself in the galloping pace and just enjoy the music.

The title track comes next, another majestic six-minute song, with plenty to explore. A fine performance from Winnard as he rises about the double guitar attack to deliver the story. A brief interlude follows. ‘Meadowland’ is a gentle acoustic piece that leads perfectly into that old classic ‘Under the Greenwood Tree’. The re-recording is vibrant, energetic, and uplifting. It gallops along, encouraging you to raise your sword to a time when chainmail was all the rage!

‘Ridge and Furrow’ is a timely reminder of Dark Forest’s past, and a shining light to their future, which on this showing, is bright.