Heavy metal and Tolkien go together like peanut butter and chocolate, they’re made for each other. It’s also down to how different bands of wildly different styles can create music based on Tolkien’s world and be just as good as the other. Keys Of Orthanc, Blind Guardian, Olorin and now Morgul Blade etch their name to the list of bands that have taken inspiration from Middle Earth. The band are a four piece from Philadelphia, United States and are a fairly recent creation having only started around 2018. By 2019 the band had released their first EP by the title of Harbingers Of Power And The World’s End, however before long they would soon become signed to No Remorse Records, a great step in the right direction for a band who haven’t yet released their first full length yet. That brings us to Fell Sorcery Abounds, a record that seems to promise us a classic heavy metal sound all about Tolkien’s vivid creation and the histories that encapsulate it. I’m always curious how metal will interpret Tolkien and Morgul Blade are no different in this respect. Let’s see what they’ve conjured up for us.

Vocally the album may give us a sound that feels like it’s leaning towards a black metal aesthetic, however musically speaking the band have a very firmly established standard heavy metal style. What I really liked about the vocals though was how, despite the snarling and intentionally evil sounding tone, the vocals are actually really easy to follow. The overall flow of the album is one that takes its time and is more than comfortable at stewing you within its atmosphere, the band are in no rush to get you from one track to the next. As a result the vocals also take their time, injecting additional layers of atmosphere into the record which really help to give the band a unique identity even amongst bands that have also used Tolkien and Middle Earth as direct influences for their songwriting and subject matter. Plus the vocals seem rather apt for this material as well, it’s like we’re in audience before some Ringwraith or fallen Numernorean of the First Age (oh yes I know plenty of Middle Earth lore) therefore the vocals aren’t merely a blackened form out of delivery choice alone; they come across as if uttered straight out of Tolkien’s world.

Speaking of which, that guitar work really excels at creating a galloping yet steady flow of music coming your way. We’ve touched upon how the band take their time with their music and how it crafts a record you can easily keep up with, but what I’ve picked up on is the storytelling aspect such an approach to riffs create. Like a lot of classic metal, Morgul Blade put their riffs at the heart of their performance but more so than that, is how the guitar playing determines where the songwriting goes. As riffs change and different segments come and go, we can hear the various tracks evolving. This isn’t some static songwriting where the song will remain rather unchanged from beginning to end, the way the band have organised themselves around their riffs guarantee a stable base from which everything else can be focused towards. 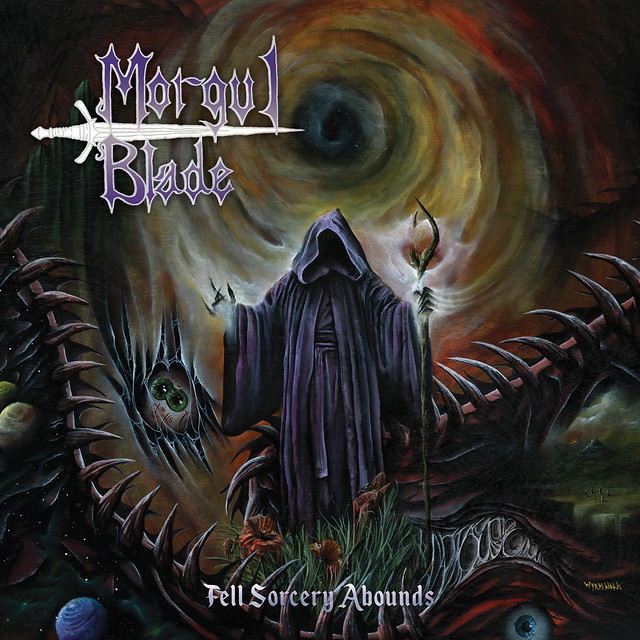 The drums here grew me on considerably. They may not grab your attention straight away but the more you proceed through this record and get used to the songwriting Morgul Blade offer you, the more you’ll come to realise how vibrant and active the drums really are. Given that this is a heavy metal album the drums aren’t going to be throwing anything super extreme at you; no blast beats or double bass onslaughts or anything of the like and yet, the drums have this bouncing and fun vibe to their performance. Whenever you’re listening to the drums, pay attention. You may be surprised as to how swiftly and subtly the drummer may seem to work from right to left and back again, covering the full breadth of his kit. He isn’t going to be utterly crushing his kit due to what style of metal the band play, yet it’s hard not to like the drumming here owing to the life and zest it seems to add to the band’s sound. What’s more is that it’s easily audible and hasn’t been thrown to the back of the album’s mix just to satisfy a fixation on guitar work either.

I wasn’t expecting to hear some legitimate variation during this album. Throughout the record the band sprinkle a few periods of cleaner, more serene vocals that stand in stark contrast against the orcish, shadowy delivery as well as some acoustic segments; one of which is a full track titled “Oak In The Mist”. It may only be a short track but like the piece preceding it gives us a window into how the band went about structuring their record. They’re not just playing nine tracks in a row just because that’s what you do with a heavy metal album, they actually put good thought into how audiences will perceive and feel about their record so it doesn’t risk becoming laborious listening. Granted the band’s style of songwriting isn’t the kind that’s going to cause grating or boredom to set in since they aren’t vying for an extreme form of songwriting, however it’s just great to see that the band take their craft seriously enough to warrant a few breaks here and there within what audiences will come to recognise as the band’s distinct sound.

In conclusion I found this record to be a solid and fun ride. Closing out to the similar keyboards that first introduced us to the debut full length by Morgul Blade, the band leave us with a keen sense that they will be back. It’s striking how broad the inspirations people will take musically in regards to Tolkien’s work. We had Keys Of Orthanc release Of The Lineage Of Kings near the start of the year which was this much more black metal-oriented yet synthesised album harkening to a much darker atmosphere than what Morgul Blade give us and yet, the two bands are both playing music about the same world of Middle Earth. Morgul Blade’s approach to Tolkien’s genius feels like you’re sitting down amongst an inn or hall and listening to the long told and bygone tales of ages hence. The album has that cosy, storytelling aesthetic to it which really ropes you in and doesn’t make you feel trapped or ensnared at any point; you’ll feel like you could leave at any moment you wished except you’re rather comfortable in listening to this lore and stay because of how engrossed you’ve become. It’s been some time since I heard such a stripped down and back to basics kind of heavy metal record that doesn’t throw anything unexpected at you, and still I’ve come away feeling like that was everything I wanted from such an album. This was a really entertaining record and it’s one I can fervently recommend to those who want a lighter metal offering of Tolkien’s world.