There’s something fitting about the subterranean location for tonight’s gig. Whereas Academies 1, 2 and 3 are straight forward concert venues, the basement location is something of a labyrinthian series of walkways and levels, the huge posts supporting the building can limit the view of anyone not at the front of the stage and the back of the room is more of a communal meeting area, with nice seating and normal lighting.

We don’t get enough Post Metal shows in Manchester so it was good to see The Ocean managing to make it to town after last year’s aborted tour. Sadly neither pg lost nor Svalbard accompany the Germans on this one, but we do get Playgrounded and LLNN as substitutes; and what glorious replacements they are.

Athenians Playgrounded open the show with electronic-flavoured Post Metal sound. Mixing warm dance beats with cold stabs of industrial drone is both engrossing and hypnotic in equal measure. They play as the venue fills yet no one is going to the bar before taking in the onstage spectacle. There are moments of Progressive music, when the vocal takes on a more Indie feel and the sustained chord could be straight out of the Pink Floyd playbook; the whole set feels like a communion of sorts and the rush to the merchandise stand after the final notes have quietened shows Playgrounded attracted a whole load of new fans tonight.

LLNN, from Copenhagen, are a wholly different kettle of fish. Brooding and ominous, the introduction to the set’s use of keyboards conjures the unnerving screams of Gyorgy Ligeti’s score from The Shining. With the exception of Parallels, from 2018’s Deads album, the set is composed entirely of songs from this year’s Unmaker record. Imperial wastes no time whatsoever in get heavy real quick, and if Playgrounded can be accused of killing with kindness, then LLNN are out to inflict maximum blunt force trauma.

Vocals scream in the vein of Cult of Luna and the unrelenting assault of Obsidian gives way to the initially more refined Interloper, but which becomes a stomping rough beast under cold blue light as it progresses to its uncompromising conclusion. There are few bands so heavy as to make Godflesh sound commercial, but LLNN’s crushingly apocalyptic hellscapes offer no respite from the musical savagery; there are, no doubt, many a corpse-painted horde pledging their souls to be even a fraction of this destructive or menacing.

The Ocean certainly have their work cut out for them in following LLNN’s tour-de-force of intensity. But, with the Germans having more than twenty-years under their belt, they hit the stage in no mood to give any quarter whatsoever. Opening with Triassic from the most recent record marks the first of half a dozen visits to 2020’s Phanerozoic II: Mesozoic/ Cenozoic album. Not to be outdone by the Danes, The Ocean play with such an intense low end that the foundations of the Academy building literally shake. There’s a plastic vessel of water on a table nearby that is acting as though T-Rex is approaching and I’m not sure whether my kidneys are rattling within my torso to the bass sound.

I cannot realistically imagine a band of any other genre of music being able to get away with subject matter leading to titles such as Silurian: Age of Sea Scorpions, Bathyalpelagic I: Impasses or Miocene/ Pliocene without finding their sound compromised; but, such is the depth of Post Metal’s scope that lengthy tracks about the prehistory of the world seems merely de rigueur.

Complex and length though they are, there is never a moment The Ocean – or, for that matter LLNN and Playgrounded – come across as indulgent; rather their compositions have a natural presence

that demands the space to breath and evolve. Aaron Turner coined the phrase: “Thinking Man’s Metal” for a definition of his work in Isis (the band, rather than the other lot… you know who I mean) and contemporaries who push the boundaries of the Heavy Metal genre beyond its accepted constraints.

While it might not be the kind of music to lodge a melody that you cannot shake, there is a real possibility that the crowd, exiting the venue, would have the multi-facetted thirteen-minute-plus Jurassic/ Cretaceous spooling through their heads long into the evening. 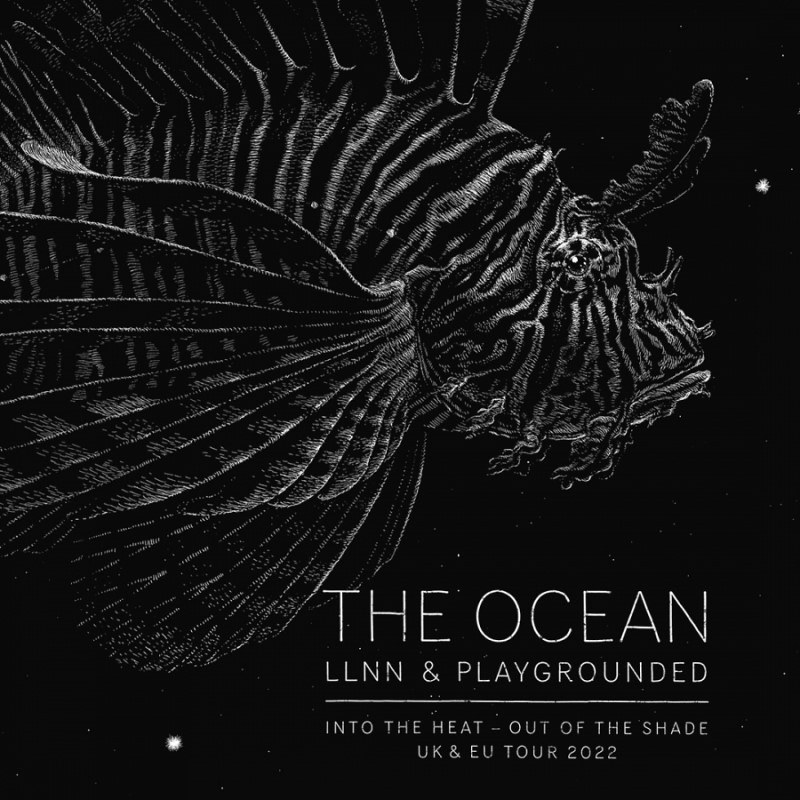