A bitter, wintery November evening in Bristol sees 70 hardy thrash fans gather on the boat in the Mud Dock in Bristol. It may be a small number but there is a passion present often missing at gigs many times the size.

Having made a 12-hour trip from the previous night’s show in Dublin, this is the final date on the short UK and Ireland segment of this lengthy European tour. The bands are tired but in high spirits. Vektor main man David DiSanto mingles happily in the upstairs bar on the boat prior to the gig starting. He’s humble, relaxed, and engaging.

First on are Dutch trio Cryptosis. The band formerly known as. Distillator reinvented themselves a couple of years ago with a new name and highly improved style of technical thrash. Their 2021 release ‘Bionic Swarm’ was genuinely impressive and it’s from this album that the band draw their set. The lighting is impressive for the venue where too often reds and greens dominate. They are still present of course, but the use of flickering lasers, ever changing spots and a constantly evolving switch of colours adds atmosphere to the band’s ferocious sound.

“We’ve travelled 12 hours to make this show” roars Houvast. It’s no wonder that Cryptosis are serious. Few smiles. Much concentration, unsurprising when you listen to ‘Bionic Swarm’. There’s a lot going on and with Laurens Houvast dealing with vocals and lead guitar, it’s impressive to see them keep everything focused. Alongside Houvast, Frank te Riet adds backing vocals as well as pulverising bass lines, whilst drummer Marco Prij concentrates on administering a ferocious battering, as well as some of the programming to ensure the band’s sci-fi sound is supported by the necessary backing effects.

Musically, it’s a sonic assault on the ears. The sound is good, but still muddy enough to muffle the searing lead breaks that Houvast throws out. The band open with ‘Decypher’ and blast through an eight-song set which impresses. Houvast is constantly switching sides with te Riet, making use of three microphones positioned across the stage. His barking delivery works well, and the crowd seem reasonably familiar with the songs. By the time Cryptosis launch into ‘Flux Divergence’ they’ve ensured a queue at their (impressive) merch table. Having seen them as Distillator in 2016, it’s a massive improvement. 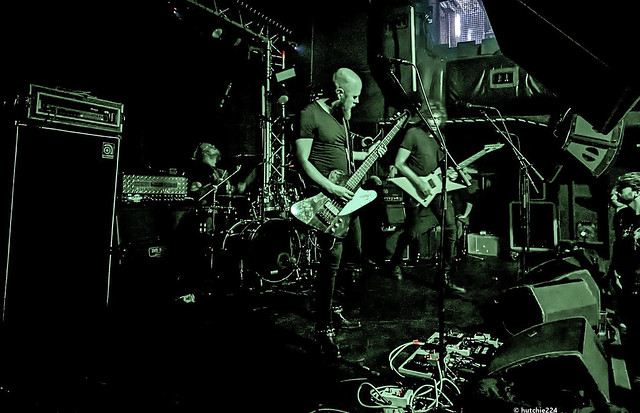 Vektor have a cult following. Talk about the band in the bar was uttered in hushed, reverential tones. The promise of ‘Terminal Redux’ was crushed by the band’s sudden hiatus, whilst the more recent publicity regarding DiSanto’s personal life has been an unwelcome, uncomfortable distraction. I’d invite you to draw your own conclusion on the story that still lists in the search engines when you hunt the band’s name. My position is … well, that’s for me to consider.

Revitalised by the arrival of two new members in bassist Stephen Coon and drummer Michael Ohlson DiSanto has regrouped with his “best friend since 2004” Erik Nelson. You can see the friendship on stage, the laughs, the smiles, the little flicks, and tricks. Vektor are enjoying themselves and the crowd respond with some small but aggressive pits quickly forming. From my view on the balcony, there was at lease on fan making himself a nuisance to some females who gave him short shrift.

Vektor are intense. They blast into ‘Changing the Void’, one of four from ‘Terminal Redux’. The audience mouth the words, they punch the air, they windmill. On stage the smiles are broad. Coon’s hair gets caught in Nelson’s guitar strings. Cue laughter and mild panic between the too. DiSanto doesn’t miss a beat. His snarling deliver matches the pace and tempo. ‘Black Future’ from the album of the same is served up with some dark riffs, whilst things slow temporarily during ‘Collapse’. ‘Dead by Dawn’ from their spilt release with Cryptosis is a curved ball but retains the attention – it’s the one time the pit allows time to breath.

DiSanto thanks the crowd for coming out. “we’re familiar with spaceships” he quips, “but not water ships!” he laughs in reference to the unnerving list of the venue. “Maybe you should all go over to that side” he jokes.  It’s met with laughter, fist pumps, cheers from the crowd and a devastating double salvo to conclude. First up, ‘Recharging the Void’ which excels in technicality, musicianship, and intensity. “It’s our last song” says DiSanto. Vue boos. But it’s one to finish on. ‘Asteroid’ rounds off a fine evening and leaves the audience wanting more.

Vektor may be a busted flush to many. Yet, musically, they are phenomenal. Intricate, technically flawless, this was a show that many had been waiting for and in some cases, never though they’d see. If you can manage your moral dilemma and like your thrash metal, then these are two bands well worth catching next time round. 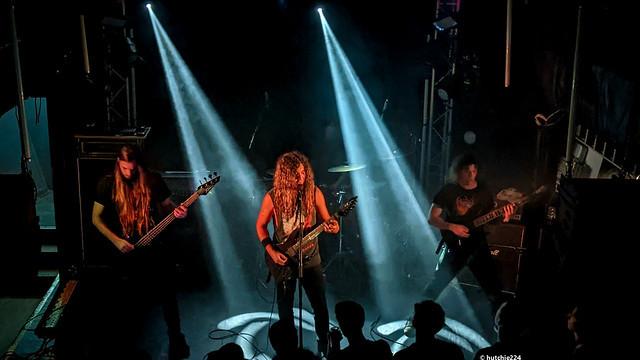